Home  »  Historical Mullets • InfoMullets • Russo-Ukrainian War: 2014-2021   »   Historical Mullet: Armed groups Russian into Crimean chaos Putin things back in order.
Spread the love
TLDRUpFront: Russia continues military deployments into Crimea and eastern Ukraine. Ostensibly to secure Russian assets this is beginning to look like an intervention.
FullContextInBack:
The armed occupation of strategic locations in Crimea has expanded – including civilian airports and a military base. All of the soldiers have uniforms, assault rifles, anti-tank weapons and have warned journalists they will “shoot to kill” if approached. What they don’t have? Any identifying insignia. Kiev is claiming they are Russian soldiers – Russia is saying…well…not much.

Kiev you dig it?

Russian diplomats are using very careful language to tip-toe around what their troops are doing in Crimea(1). For the movement of armored vehicles:

““The Russian Foreign Ministry has passed an reply to the Ukrainian side on the movement of the Black Sea Fleet armored vehicles in Crimea, which is caused by the necessity to provide security for the Black Sea fleet’s naval deployment areas on Ukrainian territory, which happens in full accordance with basic Russian-Ukrainian agreements on the Black Sea Fleet,”(1)

As to the troops seizing the airport:

“No units of the Black Sea Fleet were deployed in the area of Belbek [airport], nor did they take any part in blocking it,”(1)

Note how he didn’t say “Russian” troops on that second one, just ‘Black Sea Fleet’. The word is that the soldiers who are seizing the airport are coming from as far away as Sochi, which would not be the Black Fleet forces.
There is a closed-door UN Security Meeting going on now.
In other areas, Russian armored personnel carriers and troop transports are fanning up and down the region, some of whom are admitting they are soldiers of the Russian Federation(2), (3).

Non-State Actors Getting in on the Game

It’s not just motorized rifle battalions that Russia is moving into Crimea. Non-state actor groups closely allied with Putin are moving from Russia into Ukraine. Alexander Zaldostanov, pictured below with Putin, has apparently led a convoy of his biker gang “Night Wolves” into Crimea.(4) Zalodstanov’s nickname is the “Surgeon” and I don’t think he’s licensed by the AMA. 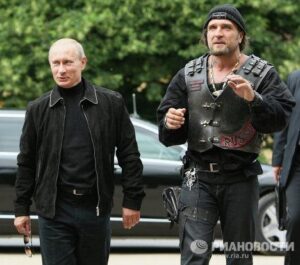 We used to ponder in Afghanistan what a different model of counter-insurgency force would look like as opposed to the heavy footprint of US COIN efforts in Iraq and Afghanistan. What would be more mobile, reactive, less easy to target with IEDs? One of our fanciful ideas was military force composed entirely of soldiers on BMX bikes, trikes, and quads – highly mobile, light, fast, and well spread out. Generally, paramilitary groups are better at counter-insurgency than regular troops anyways. Why Syria brought Hezbollah from Lebanon and Basji in from Iran in to deal with the rebels. Not sure where Nightwolves fall in terms of capabilities – but given their association with Putin it is not surprising to see them move in. There are several other Russian groups out there that would be worth watching to see where they move. Putin’s been cultivating a lot of nationalist movements in Russia – and some of these were beginning to turn on him in the opposition marches of last year. Maybe now is a good time to flush them out into Crimea and give them something to do away from home.

President Obama has issued a strong warning to Putin that any further action by Russia in Ukraine would be met by ‘further timeouts’ and perhaps even ‘suspension of TV privileges.’ It’s not that the United States has no leverage in the region. We always have leverage. It’s just a question of whether it’s in the national security interests to use it and what are the potential consequences of using/not using (either action will have consequences.)
From political to economic to military (in terms of escalation) I think we’re applying political leverage now…and rapidly gearing to escalate to economic leverage. I’ve heard canceling of G8 participation by Russia, scuttling of trade deals and even sanctions being floated this afternoon. It all depends what happens in the next few days. I know Russia’s economic woes are high, they need $120/bbl for oil to balance their budget so as long as the Brent price stays beneath that it increases pressure – but probably not on a timeline to help Ukraine.
In terms of military leverage we have options – none of them good – but *not* doing anything might equally be ‘not good’ if it destabilizes Ukraine or encourages further Russian aggression. There’s talk of a ‘mediation mission’ which is basically a UN-mandated and staffed peace force that (ala Balkans) steps into the area to keep any side from moving to far, but Russia can balk at that. No-fly zones over Ukraine come to mind as well as an intermediate escalation step that does not provoke military conflict but firmly establishes US interests and present.
The key is – who is the legitimate government of Ukraine. Who can legitimately request US foreign military assistance legally on behalf of Ukraine? That’s the tricksy part. The former President was ejected in legally questionable but ethically justified actions by the parliament. If Ukraine’s new government requests help in maintaining their sovereignty – it puts the United States in a sticky place.
If – however, they say “we need financial support”, that’s much easier (and faster) to put in place.

Absent a direct change of the trendline it looks like Crimea is heading for independence or some form of separation from Ukraine. Three scenarios how that can play out:

Where is Ukraine in all of this? This intervention appears to shred the Budapest Memorandum. At the end of the Cold War when the Soviet Union broke up, Ukraine was the third strongest nuclear power in the world. Under the Budapest Memorandum, they exchanged all their nuclear weapons too…um…Russia. And in return, they did get a very nice commemorative piece of paper where Russia promised to respect their sovereignty in the future. Don’t think that agreement is working out quite the way they intended.
Likewise, the United States is a signatory to Ukraine’s sovereignty. If things get worse, and they may not if this all defuses in a day or two, and we *don’t* back that commitment, it calls into question similar security guarantees in many regions that are actually the foundation of quasi-peace or at least avoiding all-out arms races such as in the South China Sea.
ALJ has a liveblog running – with the statements from the Ukrainian rep to the UN: “We are strong enough to defend ourselves.”(5)
(1) https://www.rt.com/news/russian-vehicles-crimea-comply-agreements-227
(2) https://www.washingtonpost.com/world/europe/russian-troops-take-over-airports-in-crimea/2014/02/28/659fbec0-a082-11e3-a050-dc3322a94fa7_story.html
(3) twitter.com/euromaidan/status/439410888697589760
(4) https://www.huffpost.com/entry/night-wolves-ukraine-putin-biker-brothers_n_4873315
(5) http://live.aljazeera.com/Event/Ukraine_liveblog
Tags:Crimea, Russia, Ukraine