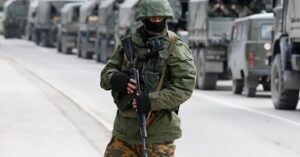 An intervention veers into war.

FullContextInTheBack:
Ukrainian Prime Minister Klitschko declared Russian intervention into Crimea an act of war and for Ukraine to mobilize its military. Russia has reportedly moved 15,000 troops into Crimea. Putin and Obama talked for 90 minutes by phone and the UN Security Council has an emergency session tonight. (1)
In Russia, President Putin received authorization to use military force from the Russian Senate. Notably, the authorization covers all of Ukraine and not just Crimea. Also, the frequent references to ‘fascist’ forces threatening Russia’s borders tie in with the emerging theme of the pretext justifying both intervention in Crimea and, it seems, broader action in Ukraine.(2)
Idiomatic phrasing such as ‘Western influences are fascist and they must be stopped at the borders’ invokes the symbology of the Soviet resistance against Nazi invasion. This is a powerful symbology because after Stalingrad the Crimean port of Sevastopol saw some of the heaviest fightings in WWII, known as one of the recognized “hero cities” of the former Soviet Union.(3) Not mentioned as much but a real politick concern of Russia is that Sevastopol is one of few warm-water ports on the Black Sea a strategic imperative of Russia since Peter the Great.

I don’t honestly know much about the Ukrainian military or its state of preparedness – on paper, it’s no slouch and stayed largely out of the recent unrest.
Ukraine has more recent experience in actual operations and the morale bonus of fighting on their country – though it’s debatable that would extend into Crimea (there is very little Ukrainian military presence in the Crimea). Russia has huge numbers, a more modernized kit, and the support (maybe?) of the Crimean majority – it would also face problems though with the Ukrainian ethnic minority and Tartars in Crimea. Also, the Ukrainian military is without a chief of staff who was sacked for refusing (it is rumored) to deploy the military against protestors.
What might really tip things, either way, is the introduction of recent IED tactics – which can largely be employed by trained or untrained militias. The videos are on youtube and the materials are at your nearby hardware/gardening shop.
Russia has never really had to deal with an extended IED campaign of the likes seen in Syria, Iraq, Afghanistan – and their experience/success in Chechnya is mixed. All their armored units are still low-slung to the ground, better for a shooting war against TOW’s and ATR’s than implanted IED’s and a counter-insurgency.
That is not to say Ukraine doesn’t face the same threat, pro-Russian groups either in Crimea or in the eastern provinces could very easily adopt IED tactics.