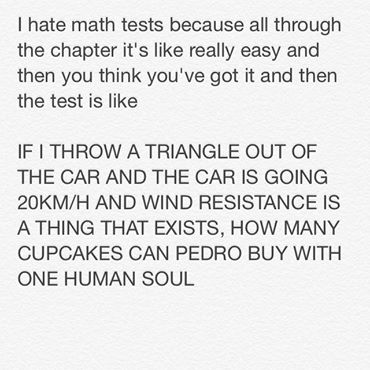 A friend of mine posted a math-meme the other day which presents a seemingly unsolvable math problem: what are the physical properties of a triangle thrown from a car with wind resistance leading to how many cupcakes can Pedro buy from one human soul? Reese’s cupcakes to be specific.

So I went about solving it. The answer by the way is ~29.26M cupcakes. So what happened?

I created a Rube Goldberg model, measured in seconds. It assumes that Steve, a 10hp victim, is walking unfortunately near a road a few yards from Pedro, a necromancer with a fondness for Reese’s cupcakes.

At 10seconds into the simulation someone decides to throw a 10″ cast iron dinner triangle (2lbs) out of a car traveling at 20km/h. They get a good wing on it and manage to chuck it at 40km/h – so the triangle exits the vehicle traveling at an initial velocity of 60km/h. It takes 2 seconds for the triangle to hit Steve in the head, during which time air resistance slows the triangle down to a gentle 58km/h or 16.5 meters/second. It takes 10cm of Steve’s head, beginning with his skull and protruding well into the soft brainy parts to decelerate the cast iron triangle from 16.5m/s to 0. This transfers 12,100 newtons or about 2,720 pounds of force into Steve’s skull – about twice times the force of a pro NFL linebacker hit. Steve takes 13.5HP of damage – about the equivalent of a critical hit with a maul hammer and +3 Strength (AD&D3.0). Steve only having 10 HP flops to the ground and rapidly bleeds out to -10 HP in just a combat round or two (3 seconds/round). Poor Steve.

But wait…at -10 HP Steve’s soul leaves his body at ~18 seconds into the model the soul begins moving to Pedro, who is 50 cubits away. We know a soul can travel 500 cubits in a breath so it doesn’t take long before Steve’s soul is available for sale by Pedro, the Necromancer.

Now the value of a soul could be a weighty philosophical question. Fortunately the Federal government has solved this for it. The EPA guidelines sets a “Value of a Statistical Life” and it’s about ~$7.2M in 2006 dollars or $8.7m in 2014 dollars.

As soon as Pedro begins collecting on Steve’s soul – he begins buying Reese’s cupcakes. Being a frugal shopper Pedro buys in bulk, getting the Betty Crocker Reese’s Cupcakes mix – $28.75 for 8 packs or about $3.57 per batch. By 20 seconds into the model Pedro is happily emptying several Costco’s worth of Rese’s Cupcakes shrink wrap flats a few hundred thousand per second. (Not modeled is the friction and heat generated by this which would likely immolate Pedro and all his cupcake mix.)

For simplicity we assume that, as a necromancer, Pedro has plenty of zombie helpers with easy bake ovens (safety first) who begin churning out cupcakes as soon as Pedro buys them. As each batch makes about 12 cupcakes Pedro leaves the transaction a few minutes later with about 29,268,858 cupcakes on about 2.4M batches. Pedro’s happy. The zombies are happy. Costco is thrilled. Everyone’s happy. Except Steve. Sorry Steve.

But the math problem is solved.