Home  »  Foreign Affairs • InfoMullets   »   InfoMullet: Military Reconassaince Web 3.0 Style
Spread the love
TLDR Up Front: Volunteers on wikipedia’s conflict sites work in anonymity to produce some of the most detailed, up to date and clearly labeled maps available on the conflicts in Syria and Iraq. You just have to trust wikipedia. 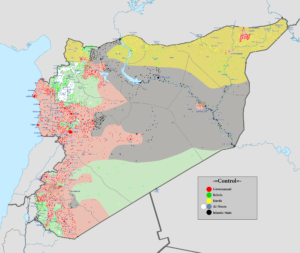 Full Context in the Back: It’s amazing what can be done with modern distributed technology and open source efforts. The article linked comes from a blog that tracks insurgent activities – it describes the advance in Aleppo province through rebel held territory by ISIS.
The map linked displays this as one of the four “offensives’ of ISIS in Syria. They aren’t labeled but you can see at the top of the map above Aleppo city the gray arm moving into the green (what the article is talking about), a central offensive working its way towards Homs and Hama, how far (and how fast!) ISIS has moved *beyond* Palmyra in the south and the continuing slow consumption of Kurdish territory in the northeast in Hasakah province.

The map is a wikimedia project, updated several times a day and is insanely precise – with the huge caveat it may not be accurate.
Tags:Aleppo, Hama, Homs, ISIS, Palmyra, Syria, Syrian Civil War