Home  »  Foreign Affairs • InfoMullets   »   InfoMullet: Battle of Five Armies PT II
Spread the love
TLDR Up Front: The Syrian government remains holding the most gains in the Aleppo battle, but a counter-offensive by the Al-Nusrah front aims to undermine those gains southwest of the city, while ISIS continues to try and contain the Syrian government’s advance east of Aleppo to Kuweyenes air force base. 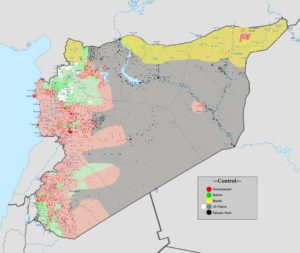 Full Context in the Back
Prior to the Paris attacks I indicated that the key battlefront in Syria going into the winter was likely to be the operations in and around Aleppo. At the time were five major sides involved in this conflict, leading me to borrow a name from the Hobbit and call it the “battle of five armies”(1):
1. Non-ISIS/Non-AQ/Non-Government Rebels (green in the map – these are the Turkomen fighters, Syrian Revolutionary Council and remnants of the FSA)
2 the Kurdish Self Defense militias (YPG and Peshmerga/PKK support) (yellow)
3. the Al Nusrah Front (white – AQ Affiliated Rebels who had taken Idlib and key areas of Aleppo province west of the city )
4. ISIS advancing from the east (black)
5. the Syrian Government – backed by Hezbollah light infantry, Iran QODS & adivsors and Russian airpower advancing through a tenuous supply line that stretches south east and south (colelctively marked as red).
The big winner so far has been the Syrian regime – backed by Russian airpower, Iranian QODS advisors and the light-infantry Shia militias they bring from both Lebanon and Iraq. Through all this Syria has indeed gained some key territorial positions from where they started, relieving the siege by ISIS on Kuweyenes airbase east of Aleppo, restrengthening the supply line to the city itself and expanding southwest of Aleppo.
Of course “five sides” is a simplification. Since this latest phase of the battle for Aleppo an Al-Queda affiliated group has split from the Al Nusrah Front on account of they were being asked to fight ISIS and they refused to comply. This isn’t ‘switching sides’, the Jund al Aqsa still remains loyal to Al-Zawhari (AQ) and not Al-Baghdadi (ISIS). And collectively these AQ-aligned jihadists are still launching a counter-offensive agianst the government gains southwest of the city. (2)
This offensive is running into Shia militias brought from Iraq by Iran to help Assad. The Shia militias tend to bring US equipment with them (Humvees especially) and those end up in the hands of ISIS and Al-Nusrah when they are scavenged from a lost battlefield. (3)
Elsewhere it appears the Syrian Kurds have strengthened their hold on the northern strip (yellow in the map) and continues to push ISIS out of Al-Hasakeh, which is key because that province holds the last oil fields in Syria not under control by ISIS. ISIS continues to advance on three fronts in the south towards Homs, Mahin and Damascus.
Also for those wondering, the Russian jet shot down by Turkish air force yesterday was operating in the far northwest of this map. Apparently on bombing runs against likely Turkomen rebels near Jirs Shagub and Kasab. That this is nowhere near Aleppo or ISIS, but very near the key coastal areas Russia is trying to hold onto for Assad is indicative of where Russian priorities remain, even after the downing of the civilian air passenger by ISIS.
I have an information mullet post on the Russian/Turkey confrontation but, hard as it may seem to be, its even more complicated than the Battle for Aleppo and simplifying it down is proving a challenge.
As always the Wikipedia entry on the Syrian Civil war is an excellent source for more in-depth information of what is going on, as well as the source of the map provided below which has near daily updates of changes in control and conflict. (4)
(1)https://www.facebook.com/tim.clancy.313/posts/10203278603726460
(2) http://www.longwarjournal.org/archives/2015/11/jihadist-led-coalition-launches-counteroffensive-in-aleppo-province.php
(3)http://www.longwarjournal.org/archives/2015/11/al-nusrah-front-fights-iraqi-militia-in-aleppo.php
(4) https://en.wikipedia.org/wiki/Syrian_Civil_War
Tags:Al Nusrah, Civil War, Free Syrian Army, FSA, Hezbollah, Insurgency, Iranian QODS, ISIS, Kurdish Self Defense Militias, Russia, Syria, YPG