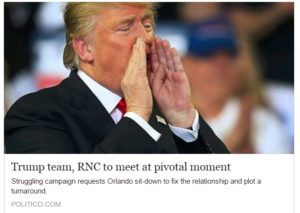 August 12, 2016 Orlando, FL
After what has been described as a “come-to-Jesus” meeting by RNC insiders, an angry Trump lashed out at his host to the campaign press pool before getting on his campaign bus.
“This Jesus guy, not a nice fellow,” Trump began. “Not a nice fellow at all. Said some unkind things. Very unkind.” In unscripted, sometimes rambling, remarks that followed Trump blamed Jesus for a host of ills that currently ails the nation. “Look, he turns over the moneylenders tables. So what? Anyone can do that? What you need to do, what *I* would do, is sit down with them. Negotiate, eye to eye…I’m a great negotiator. And we’d work it out. Best deal. And by the way, the Temple, I’d fix that place up. Make it gorgeous, really nice. Golf course and everything.”
Although Trump would not directly link Jesus to the founding of ISIS as he had earlier in the week President Obama and his opponent Democratic Nominee Clinton, he didn’t rule it out either. “Look all I’m saying is ISIS is from the middle east, and Jesus is from the middle east. That’s all I’m saying. People can draw their own conclusions.” Asked whether his proposed ban on immigration from “countries of conflict” would include Jesus, Trump didn’t hesitate, “Of course. I mean, what do we know about this guy? Nothing! How are we going to vet him. We let him into the country, what’s he going to do? Do you know? Do you? Oh sure John says he knows, but who’s John…another guy from the Middle East. You see what I’m saying? You see how these connections line up?”
Batting away campaign aids desperately trying to push him onto the bus, Trump seemed to revel in the give and take with the press corps whom he has been critical of recently. “You guys are terrible, absolutely terrible. I get in office, you’re all going to be in trouble. This Jesus fellow, he’d turn the other cheek. Not me. Not me at all. I’m very tough. Very tough. Fair. But tough.”
As the impromptu press conference continued out front, a visibly agitated the Lord and Savior left out a back entrance of the hotel to a waiting caravan of donkeys. Apostles insisted that He would not be answering any questions or giving any statements, maintaining an over 2,000 year policy of avoiding press coverage. However, one source who requested anonymity in exchange for forty pieces of silver claimed he overheard the Son of God talking to Paul about his just concluded meeting with Trump. According to this source, Jesus characterized the meeting as “heated” and “unproductive” and “said a lot of things you’re not going to be able to print in a newspaper unless you do it in Aramaic.”