Home  »  Foreign Affairs • InfoMullets   »   InfoMullet: Dire Straits
Spread the love
TLDR Up Front: A Russian naval aircraft carrier group, including 40 fighter air craft, is moving into the Mediterranean. They are believed to be enroute to the eastern Mediterranean to join operations in the unrestricted and unopposed bombing of Aleppo. Spain has agreed to allow Russia to refuel its ships in Cueta, a territorial holding in North Africa. 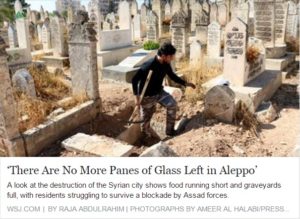 The Rains (of Castamere) on the Plains of Spain.

Full Context in the Back: So Russia has resumed it’s bombing of Aleppo with Secretary of State Kerry graciously sending his seasons greetings card registering “concern”. (If Kerry’s diplomatic registrations of concern over Russian bombing were voter registration we’d have a full franchise.) This is after last week’s unilaterally declared Russian declared cease fire of several days resulted in a nothnig burger. Ostensibly it was announced to allow civilians to evacuate out of an appointed corridor, and aid relief to flow in. However it was never agreed to by the UN (who would be the one to send aid in and is still stinging from the loss of a thirty truck convoy last cease fire attacked allegedly by Russian airplanes) and on the civilian evac side there were reports of the access route being shelled during the period. Not clear who, but likely Syrian regime forces. Reality is no one got out, no aid got in. Now the bombing has resumed in an operation that, as a refresher *SYRIA CANNOT WIN ON THE GROUND.* This is an important context to keep in mind, the Syrian regime does not have sufficient military troops to take and hold the city, so leveling it is not strategically advancing any determinant cause other than to wipe eastern Aleppo off the map (which it’s doing) and provide the tactical justification with this “offensive” to do so.
Now – a Russian aircraft group is steaming into the Mediterranean past the Rock of Gibraltar presumably to add forty more combat aircraft to the operations. (Whether to rotate out existing air craft or add capability is unclear to me.) This small armada took the unusual route of sailing down the English channel, rather than the normal Russian navy practice of north of Scotland and west of Ireland. This is the naval equivalent of having a football player go out of bounds and run back *through* the other teams sidelines, not technically illegal but certainly provocative.
Spain has raised eyebrows for agreeing to allow the Russian flotilla to dock at Ceuta (1)  which is a small north African free port holding they have. Because of some peculiarities it is apparently(?) exempt from the NATO treaties and Spain has said it handles Russian refueling requests on a case by case basis. In this case, it’s okay (apparently) for Spain – even though everyone’s pretty sure those planes are going to go participate in what is increasingly be called war crimes.
I think lawyers smarter than me will figure out in this new age what that means for Spains culpability. My immediate interest is whether the ISIS and AQ cells operating in and around Cueta decide to take a shot at the ships (less likely)(2), the Russian naval personnel as they disembark (more likely) or just bomb/attack some civilian places in Cueta in retaliation (most likely) – they are operating in the area so Spain’s taking a pretty large security risk and they have just become a valid participant for military retaliation against military targets under jus ad bellum (naval shipyards, fueling re-stations, government buildings in Cueta…civilians are never a valid target of military retaliation.)
(1) http://www.telegraph.co.uk/news/2016/10/25/nato-fears-russian-battle-group-may-be-used-for-indiscriminate-t/
(2) https://www.thespainreport.com/articles/714-160412124904-islamic-state-weapons-cache-hit-list-in-ceuta-first-of-its-kind-in-spain-says-home-office
Tags:Aleppo, Russia, Syria