Home  »  Domestic Affairs • InfoMullets • Lightly Sourced Commentary   »   InfoMullet: 50 Shades of Restraint
Spread the love
TLDR Up Front: For months the Dakota protest camp was on Army Corps of Engineers (USACE) land and USACE signaled it would not require them to leave. However on Sunday a smaller group set up a new camp on a private ranch impeding access on public highway – leading to a confrontation when police cleared the camp in order to reopen the highway. It is imperative the federal and local LEO response continue to show restraint – for the same reasons they showed restraint in Nevada at the Bundy cattle standoff and in Oregon against the Bundy armed militant occupiers. 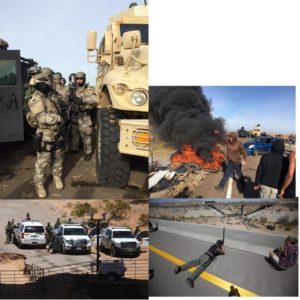 Still a better movie than Twilight.

It’s all about restraint.