TLDR UpFront: ‘Well-dressed’ Turkish security guards abused diplomatic immunity to attack Armenian and Kurdish protesters demonstrating outside the White House during President Erdogan’s visit. Two arrests have been made, and 12 were injured, including a DC police officer. This attack occurs within the context of increased tension in Turkey itself over a disputed Constitutional referendum as what looks increasingly like a dictatorship emerges in post-coup Turkey. 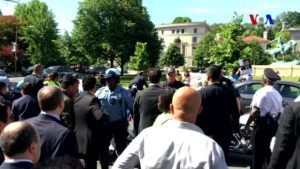 US Secret Service initially apologized until they realized this time it didn’t involve them.

Full Context in the Back:  It’s hard to stumble over a bar set so low that it’s “mission accomplished, if your expectations are that you want people who are smiling in the photographs.”(1) And yet that’s exactly what happened when two days of otherwise meaningless posturing between President Trump and President Erdogan were capped off by a brawl between Turkish security forces and anti-Erdogan protesters outside the White House front lawn today.

What’s interesting to the InfoMullet, who has watched many a riot and protest video to analyze the participants – is the dapper-fashion on one side of this altercation. It’s like extras from Mad Men showed up to kick some ass. No one’s violating the ‘no white before Memorial Day’ rule. Those shoes are well polished. It could be a coincidence that a half-dozen equally physically fit men all happened by the White House at the same time wearing the same suits from the same stores with the same brands in the same styles in the same colors. And all picked the same side randomly. Or it could be that these men were actually Turkish security guards who just took it upon themselves to attack protesters on US soil. And then picked a fight with our police.

Surprisingly, this isn’t the first time security guards from President Erdogan’s entourage have committed felony assault and battery in our nations capital. Though today they restricted themselves to beating up protesters and didn’t actually attack any of the reporters this time. (2) That’s probably why there’s a video now circulating of the incident DC in what police are describing it as a “brutal attack on peaceful protesters”. (3) The DC police press conference can be watched in full here. (4)  According to Chief, twelve people were injured, and at least two were arrested

“We intend to ensure that there is accountability for anyone that was involved in this assault,” Newsham said, adding that this is “not something we tolerate in our city.” (3)

Except its unlikely there will be accountability for the security guards, who initiated the attacks. Because the guards are part of Turkey’s official embassy personnel, they have diplomatic immunity. The actual people doing the kicking will get pass. If this were a house and these diplomatic personnel were guests, it’d be called overstaying your welcome. 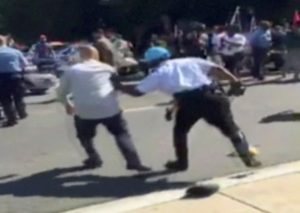 Protesters unfortunately were not issued diplomatic immunity prior to being attacked.

The protesters were a mix of Armenian and Kurdish demonstrators, groups with a long established list of grievances with Turkey in general.  But more recent outrages have colored the protests which come in a period of heightened unrest leading up to and after a failed-coup attempt in Turkey last year. A coup many believe was either staged, or at least exploited by President Erdogan to seize ever-more authoritarian powers and the InfoMullet at least believes represents a permanent break between Erdogan’s Turkey and its membership in the European Union.

A Constitutional referendum just held in April put to the voters whether these powers should be made permanent, and it passed by a bare majority. The election was marred by charges of fraud however. An oversight panel consisting largely of judges selected by Erdogan’s own faction just after the coup bypassed election law to allow millions of otherwise ineligible votes to be counted. Votes missing a crucial official stamp.

These improperly marked votes were allowed to be counted late on election day only after the same oversight panel confirmed that no ballot missing a stamp could be counted. Not once, but twice.  Its been argued that the reversal came before any results were known, a response to widespread errors by inexperienced pollsters improperly preparing ballots. (5)  Although normally one should not throw hanging-chads in a glass ballot box, and I’m looking at you here Florida, that wasn’t the only irregularity.

In rural areas – election observers found armed security personnel posted outside voting stations and inside voting rooms – warning people not to vote “No.”  (6) Which represents a slight misunderstanding of the democratic process. Add to that over 47,000 have been arrested and 100,000 purged from public and private positions for alleged “terrorist” links since the coup and the benign reasoning for the stamp reversal loses credibility.  Adding to the evidence President Erdogan is completely confident in his position he ordered Wikipedia blocked from Turkey’s internet. (7) 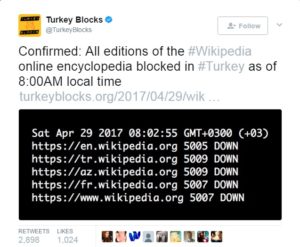 nothing to do with this page: wikipedia.org/wiki/Armenian_Genocide

The great irony of the Trump-Erdogan photo-op visit is how little the two countries increasingly have in terms of foreign affairs. Despite the proposed enhanced cooperation between one strongman and one would-be strongman, Turkey recently signed a strategic alliance with Russian and Iran. Two partners who do not have the US’s best interests at heart. The US is returning the favor by providing arms to the umbrella coalition of Kurdish forces in Syria, the Syrian Defense Force, as well as the Kurdish Peshemerga in Northern Iraq. Groups who certainly don’t have Turkey’s interests front and center.

Word to the wise to Recep’s men-in-black. Next time those protestors might be armed. And if it’s after Memorial Day? Try something in white.