TLDR up Front: With tensions in the Middle East already running high after a ballistic missile launch by Iran, the shoot-down of a Syrian bomber and armed Iranian drone by US military fighter planes – all eyes have turned west to watch today’s special-election in Georgia’s 6th District between Jon Ossof (Dem) and Karen Handel (GOP).  At stake is a seat that means virtually nothing in a House where the GOP holds a twenty-seat lead. But everything to the national political parties and the reporters that write about them. Shuttle-diplomacy and negotiations over the Qatar embargo have halted, rebels have put aside their weapons near Aleppo – all to watch as Democrats and Republicans vie to surpass one another in debasing themselves before constituents in a District previously best known for a baseball stadium no one wanted. But experienced foreign correspondents based in the region for the NY Times, Washington Post, InfoWars and AOL News have indicated it would be wrong to underestimate the special election’s impact in the Middle East. Because that’s what their editors told them to write and in the gig-economy no one’s going to say no to $.15/word. 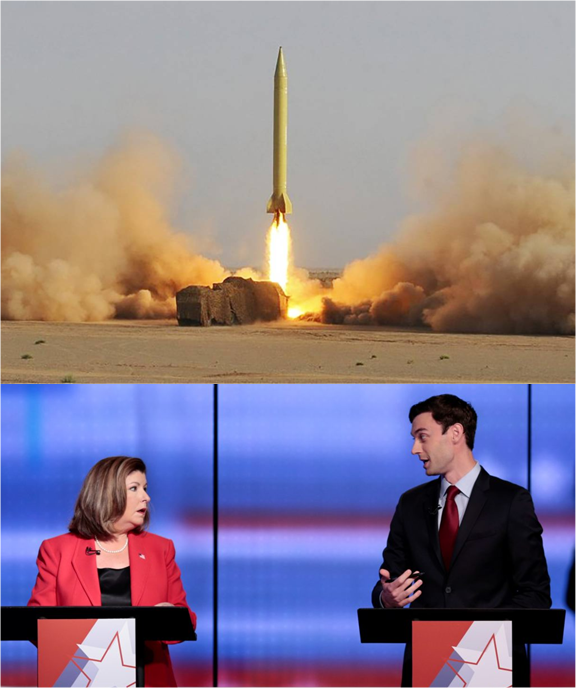 Only one of these ensures a quick death.

FullContext in the Back: Over the last 48 hours a series of military escalations have locked belligerents on what seems to be a crash course to conflict.  Iran launched ballistic missiles against ISIS. The US shot down first a Syrian SU-22 bomber, and then earlier today, an armed Iranian drone. Russia began targeting US airplanes and disconnected the vital deconfliction communication network installed to avoid escalations in the first place. As a backdrop several Gulf States are still embargoing the peninsula city-state of Qatar, isolating it diplomatically and via trade, for its alleged ties to terror. (1)

However, an eerie calm is spreading out over the region today as weapons are put down, radios picked up and TV’s turned on, to listen in to what may be the defining moment of the current conflict. Tonight, at approximately 7pm EST (11pm GMT), polls will close in what might be the most important political election in the history of the Middle East region, if not the world, in Georgia’s 6th Congressional District.

To understand why this District became so important to Middle Eastern affairs its important to understand some context. Beginning in the mid-20th Century, when it feels like the current primary season of this special election process started, a vacancy occurred when Representative Tom Price, (GOP) was confirmed as President Trump’s new Health and Human Services Secretary.  This came within the backdrop of a recent Presidential election and a cast of political reporters, pundits and prognosticators being roundly humiliated for botching the call of the election so badly. (InfoMullet included.)  Experts described what occurred next as “narrative framing” as a seemingly innocuous and likely ultimately inconsequently event is given unrealistic importance by assigning the hopes and fears of an entire movement to it out of all proportion of its possible impact.

This began a self-reinforcing feedback loops where editors – eager to write stories where they could include hashtags of #resistance for clicks, featured any special election in the country, and as more publicity was made of the Georgia 6th, more out-of-state attention and funding poured in. When the primary runoff resulted in the entirely predictable result of no single winner reaching 50% it could only be because of one of two reasons.  The first reason – that it was virtually impossible for anyone to achieve a 50% majority in a vote split between .36 x102 candidates was written off by political journalists around the country as all of them had majored in English and intersectional politics. Instead, the second most likely reason that the primary went into a runoff election between Ossoff and Handel was because that the Georgia 6th had become “THE BIGGEST RACE EVER!”™   This led to more publicity, more external spending by political action committees and more endorsements by national politicians who would be hard pressed to find the 6th on a map of the State of Georgia with the districts labeled.

As the saying goes – when the US sneezes, even if the rest of the world is dying from the black death, our reporters will write about the head cold because that’s all our readers care about.  With unending coverage pouring out of the tiny 6th to a now global audience, its only natural that the Congressional race has now taken on an importance traditionally reserved for major peace initiatives, diplomatic conferences, and the unanticipated assassination of major world leaders. (I’m eyeing you Sadat!) 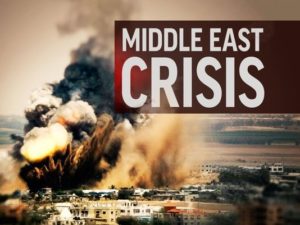 A preview of the ‘regular news’ that will be broken into to give BREAKING COVERAGE of a vote count that will stretch-on into sometime next week.

In the Gulf States, where political parties are heavily scrutinized by monarchies reluctant to embrace democratic change – viewing has taken on an air of football rivalries. Residents picked sides, GOP or Democrat, and cheer for their favorite campaign team members when they give interviews in large viewing parties organized after sun-down when eating is permitted during Ramadan.  “It feels like we’ve been in overtime play since April,” said one excited fan. “If there’s a tie tonight, will there be a sudden-death shoot out? How’s Handel’s kick?”

In Yemen, where television service has been spotty since the beginning of a Saudi Arabian intervention and sustained air war nearly last year, the election has become mistaken for an actual political drama. “They think it’s Season 2 of House of Cards”, admitted a local TV producer. “

Even the most wanted terrorist leader in the world isn’t spared from the intense scrutiny brought by a virtually unparalleled “get-out-the-vote” operation. InfoMullet reporters obtained a audiotape from unnamed US military sources allegedly of ISIS leader Abu al-Baghdadi speaking with his military council, made within the last few weeks.

“Does Guantanamo get paid political advertising?” al-Baghdadi is heard to on the poor-quality cassette tape to the sound of accompanying laughter. “Because if they don’t, sign me up! Take me in! I’m done already!  The mailers, the flyers.” The laughter dies off into an uncomfortable silence followed by al-Baghdadi launching into an expletive laced tirade,  “It never ends! The phone-calls ya ibn i kalb! At all hours they’re calling me. I have a job you know! I’m fighting four out of five  members of the UN Security Council, 11 out of 22 of the Arab League…” the tape loses quality and the rest is lost for a few seconds.

When the tape resumes al-Baghdadi is yelling at what is believed to be his chief intelligence officer Jamal al-Ciaim Not.  “I tell them ‘I’m on the do not call list!’ Jamal! How do they even have my phone number!  I tell them ‘I will bathe in your blood infidel!’  But do they care? NO! All they do is shame me…”  It’s not entirely clear from the tape but al-Baghdadi either begins laughing or crying, “They shame me on my mother’s name for not being a “reliable” party voter.” 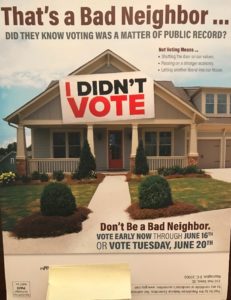 Actual mailer – paid for by the PAC that just lost your voter data to a hack. (2)

Baghdadi’s arch-nemesis and foe, Qasem Suelimani expressed similar frustration in an interview to Al-Jazeera.  “I travel a lot. Buying political clout in southern Iraq, leading Shia militias against ISIS in northern Iraq, visiting with Hezbollah supporters against rebels along the Syrian-Turkey, I don’t have a lot of downtime. So when I do get 30minutes just to chillax, catch up on Persian Talent Show, I don’t want to see is political ads. But every 30 seconds isn’t another ad. Ossof is this and Handal is that, this message approved by him or her. The one with Georgia being thanked by San Francisco – what does that even mean?!?”

Eager anticipation by residents, anger by leaders-interrupted – these weren’t the only emotions expressed from within the middle east.  Cellphone videos and pictures that have spread across Arabic social media and twitter have helped humanize the otherwise faceless suffering of the average Georgia voter. One video showed a non-partisan flash mob forming outside a pamphlet printing house burning it to the ground. Another depicted a mob charging a police line throwing rocks and Molotov cocktails, before breaking through the line to storm a robocall phone center.  Video from inside the center showed gleeful voters – Democrat and Republican alike – flipping tables and jumping up and down on telephone switching equipment. These touching images have led to expressions of solidarity, expressions of sending thoughts and prayers. Facebook now allows users to “drape” their icons with the Georgia State Flag and the hashtag #weStandWithGeorgia.

One would think that the US military in the region – currently engaged in hostile operations in Syria, Iraq, Libya, Egypt, off the shore of Yemen, Afghanistan and looking to get frisky in a few others we can’t name – would be immune to the “6th Effect” as its been dubbed. “That’s actually not the protocol in situations like this,” responded Captain Paio Lieser of US Central Command, responding to reporters questions in Qatar today.  “We actually were going to go to war today. But in the daily PowerPoint briefing, someone brought up the special election. And we’ve learned you don’t go to war in summer or on a special election. You show respect for the voters. You wait, you go to war the next day when everyone will be so mad no one will notice.”

The next question, whether the Captain believed they had proper Congressional approval to go to war, was met with a hearty round of laughter by all. Afterwards, tears in his eyes, the Captain managed to say “Officially, no comment.”

So the Middle East will watch, and wait, as everyone tunes in to CNN to watch John King call the precincts as they come in on a jumbotron screen where each pixel represents an individual house, “…because we will know how they voted. Oh. We will know,” assured King.  Except for General Suelimani of the Iranian Revolutionary Guards. He plans to enjoy the commercial-free time to binge-watch and catch up on this season of the Persian Talent Show. 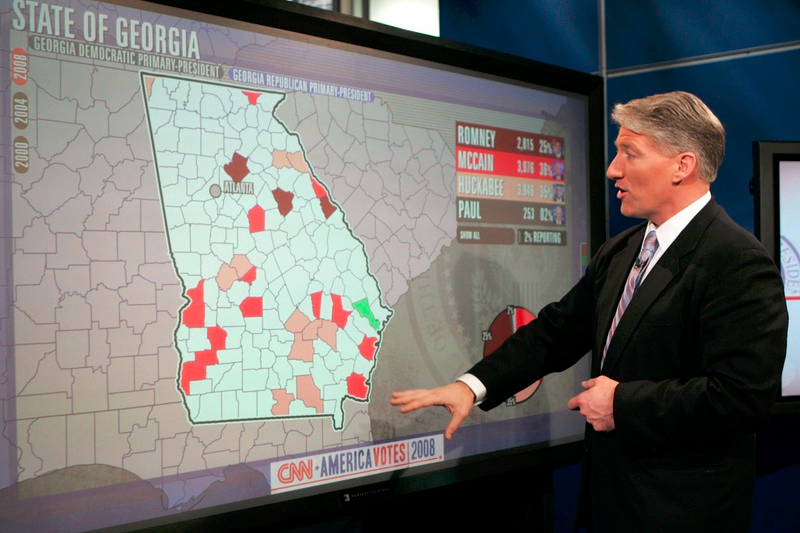 King points to the Georgia counties that have seceded from the state during the election so far.

(1) All of this is true. We have shot down air-assets of 2 out of the 3 potential enemy combatants flying in Syria, and are no longer talking to the third. While one of them is shooting ballistic missiles into the country.  But first – let’s check out those precinct lines in West Marietta! How’s it look John!?!
http://www.longwarjournal.org/archives/2017/06/us-downs-syrian-warplane-while-defending-sdf.php
http://www.longwarjournal.org/archives/2017/06/us-shoots-down-another-iranian-uav-over-syria.php

(2) These and over 40 more mailers were collected and posted by a single embedded correspondent (e.g. ‘voter’) in the 6th.  https://imgur.com/gallery/fiJAD