TLDR UpFront: North Korea originally walked back its threat to strike the United States Territory of Guam with a missile strike. That concluded the first ever “Twitter War” between two nuclear capable countries. However, the de-escalation is credited to back-channel negotiations that occurred at the United Nations more than a Twitter feed. Despite the heated words of President Trump, it appears the US military never undertook a posture indicative of taking either leaders threats seriously. Meanwhile the stated policy of both countries remains, once hyperbole is removed, unchanged. The use of nuclear force shall only be used as a retaliation to the other side’s aggression, a policy of deterrence. The problem is the threat of North Korea continues to grow regardless of the war of words, as Guam and most of the western United States are now within range of nuclear missiles.

FullContext in the Back:  Commentary over North Korea reached a peak of irrational bluster, gesticulating and hand-wringing over the last week. And that just describes the Twitter traffic between President Trump and “Supreme Leader” Kim. Social media had its own input on the discussion. (1) 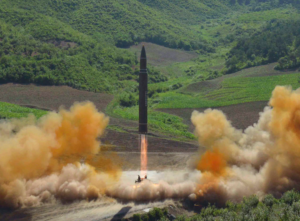 The Hwa-song 14, coming to a coast near you this summer!

However behind the heat there are serious issues. The threats against Guam by North Korea reached a level of specificity, and targeting, not made in previous threats. Four ICBM missiles to target Guam, which is the home of a large US military base and forward depot of strategic supplies of munitions.  Even though the ICBM would not be nuclear equipped (yet), it’s the equivalent of tossing Molotov cocktails in an ammo depot.

Strategically if the US were ever to conduct an action against North Korea, the ammo depots of Guam would be crucial to supply. The speculation is that without those reserves of ammunition and parts, plus a place to stage strategic bombers from, any US action on North Korea would be severely hampered. (2)

Although the world is used to hearing brash threats and posturing from North Korea, President’s Trump apparently unscripted decision to escalate the beef was atypical to say the least. The exchanges that followed were as if Baghdad Bob and Upworthy got together to do a social media campaign.

Cooler heads, presumably without access to Twitter however, prevailed. Throughout the escalation back channel contact was maintained between the US and North Korea through a UN connection. (3) This plus the active participation by China, which has a large degree of influence over North Korea, and other regional partners clearly shaken by the dialogue(4) , is credited with bringing back the crisis.

Certainly the military didn’t take it seriously.  There is a chain-of-command established by USC Title 10 and the Constitution, and it appears that whether it’s declaration on banning transgender Soldiers or nuking North Korea, Trump’s Twitter feed is not in that chain of command.

According to report the kind of military maneuvers one would’ve expected of a force preparing for war were absent in the region. Strategic bombers weren’t put on overflight, critical naval assets weren’t moved from berth to prevent another Pearl Harbor-with-missiles strategic strike.  Marines weren’t activated and prepared for movement. (5) 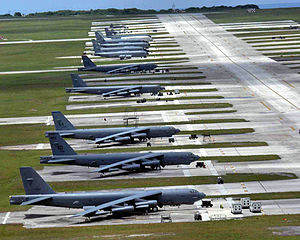 This is not how you park your bombers when expecting an attack.

However, North Korea regularly issues threats on any number of reasons. As this collection put together by the Atlantic shows:

“Two years ago, during another August standoff, North Korea issued a 48-hour ultimatum to South Korea to switch off loudspeakers blaring propaganda critical of North Korean leader Kim Jong Un across the demilitarized zone that separates the two countries, following the explosion of a land mine there that maimed two South Korean soldiers. North Korea threatened to use force to stop the broadcasts.”(1)

South Korea ignored the deadline, and days later, North Korea expressed regret for the land mine, dismissed several senior officials and put inter-Korean relations back on what it called a “track of reconciliation and trust.” South Korea shut off its loudspeakers.

In March last year, also during U.S.-South Korea military exercises, Pyongyang threatened to attack Seoul’s presidential palace unless it received an apology from then South Korean President Park Geun-hye. No apology was forthcoming, and the threat never materialized.”(1)

This is important context to keep in mind.  Although the visceral reaction by many is to blame Trump for the North Korea crisis, and his rhetoric is inappropriate and unhelpful, President Trump alone certainly is not responsible for the underlying protracted crisis.  For well over twenty-years every single President has chosen a tortured path of quasi-diplomacy over confrontation, essentially kicking the can down the road.*

That’s a Nice Can you Have There

The “can” now resembles the Hwasong-14, a nuclear capable ICBM who’s outer range, given optimal conditions, includes the western coast of the United States and as far interior as Chicago.(6)  It was the test flight of this ICBM on July 4th, as well as two recent satellite launches which prompted the current crisis of words. (Functionally a satellite rocket launch, with multiple stages of propulsion, requires the same technology as launching an ICBM carrying a miniaturized nuclear warhead.)

The threat is not just to the WhataBurger restaurant chain. Such a missile is more than capable of hitting just about anywhere in the region, including Russia and China. Although not an apparent strategic lever pulled yet – a North Korea seeking desperately needed hard currencies or other resources could threaten a smaller country with a nuclear strike.  The only deterrence would come, not from the aggressed nation itself, but the belief that the permenant Security Council members (Britain, France, Russia, China, and the US) would retaliate for such a move. And in the current climate of global instability that guranatee is not as clear as it might have once been.  Additionally, whether Putin or Xi wake up one morning and realize that North Korea can now launch a nuclear missile at their capital cities in one hour – and decide whether that’s a world they want to continue existing, is also at play.  The United States is certainly the most likely country to strike first, but it’s not the only one – especially in the event of a coup or other disintegration of the North Korean regime.

“Your Honor they had it Coming to Them”

Working through several cases in the historical record for each type the Blog advances a conclusion that:

“The U.S. could make a substantial legal argument, based on international law and the precedent of some cases, for a pre-strike attack on North Korea. But the variability of historical examples and the behavior of Security Council members make it unclear what degree of legitimacy the international community would afford the United States’ fateful decision.” (7)

For full disclosure the InfoMullet has long advocated a view that either a preventative or preemptive attack is necessary on North Korea and waiting for conditions where anticipatory self-defense, would be justified is unwise given its past international behavior It’s just not wise announce the attack on Twitter before it happens. (We also seem to recall something about a Presidential-candidate complaining about publicizing military actions before they happen.) (8)

(Aside: The article is worth a full read on its own. There’s not a perfect overlap with anterior self-defense between state and non-state actors such as an individual or group. But it’s close enough for general use about the different contexts in which anterior self-defense may be engaged. Only anticipatory-defense is recognized as legal for individuals, and even then not to the same level in all States.  Premptive and preventative self-defense are almost never recognized as lawful uses of violent force. There are very few exceptions.  Something worth keeping in mind as the phrase “self-defense” without specificity in the concept of anterior actions prior to the opponent using violence themselves are a frequent point of discussion these days.)

The Definition of Insanity

For now “diplomacy” remains the status-quo between a heavily armed nuclear capable country led by an apparent madman and North Korea.  But that diplomacy is a false sense of security as the underlying tensions remain unresolved. 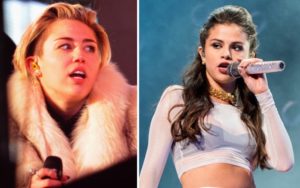 Remember when the biggest celebrity beef was between these two?

After all, it wasn’t too long after walking back his threat  Guam that Kim had a new threat to lob at the US and South Korea over planned upcoming military exercises“artillerymen will wring the windpipes of the Yankees and point daggers at their necks.” (4)  And just a week before the exercise begins North Korea released a rather amusing video invoking summer humidity alongside a renewed threat to lobg missiles towards Guam:

“All North Korea needs to do is to place its hand on a button and press it when the right time comes. The U.S. will live in fear and anxiety the whole time. They will sweat so much in this hot summer weather.” (9)
So the beef continues. No word on a response from Trump yet.

*For a quick overview of the all the efforts, and failures, to contain North Korea’s nuclear program via diplomacy see here: https://en.wikipedia.org/wiki/Timeline_of_the_North_Korean_nuclear_program