TLDR Up Front: The InfoMullet takes an unusual step of directly raising two concerns in the aftermath of the Las Vegas shooting. First ISIS claimed credit for the attack not out of desperation but because they had legitimate reason to believe they should claim credit. That ISIS either knows, or believes it knows, of directed militants and/or sympathetic supporters planning attacks that target casinos, music festivals or concerts and/or are in Las Vegas. The second concern is that the Las Vegas shooting exemplifies a new subset of the Werther-effect dubbed “High-Score Terrorism.” High-score terrorism are mass casualty attacks where one or few actors analyze past events and optimize their plans to maximize casualties. And they have no underlying motivation or ideology other than to exceed the overall casualty counts of previous incidents. 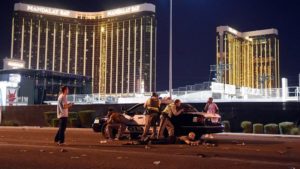 FullContextintheBack: The InfoMullet does not publicly comment on terrorist attacks or other crisis events until 48-72hours after the incident. * The first 72hours in the analysis & policy space, and not the grieving space, after a mass-casualty attack is too often white-noise speculation and white-hot emotional posturing. Evidence is the tortoise in that race and only in the second week after the shooting has the turtle passed the hare in getting a clearer picture of the Las Vegas shooter. We know a lot more now about Paddock’s history, tactics and potential motivations. Or lack thereof.  Normally in this scrum of speculation a lot of theories are raised and addressed.

The InfoMullet has two concerns arising from this incident which have not been addressed. One is immediate, the other long term.  In keeping with “if you see something, say something” these concerns are being published so that they can be considered and discussed by those with stronger pedigrees than ours. In an ideal world these concerns would be quickly debunked by sober hard-nosed analyst preferably in a tweed-suit jacket with elbow-patches or holding some high-level law enforcement title. In the world we live in, it’s just hoped someone else is considering this and not just the InfoMullet.

The first concern arises from ISIS’s false claim of responsibility immediately following the attack. The claims came as a miniseries. First the traditional claim of credit. Second, a ham-fisted attempt to bridge the incongruity between Paddock and the typical ISIS profile the hand-waving explanation of “recent convert.” Then multiple follow-ups that looked a lot like digging yourself out of a hole. The concern here is not that ISIS got it wrong, but that they had reason to believe they were right.

ISIS rarely takes credit for attacks, even noteworthy ones, where it has no basis for claim. These claims come in three broad forms:

There are numerous examples of ISIS taking credit for lesser attacks that were eclipsed by more significant attacks which it could’ve easily tried to claim, but didn’t.  In 2016 a Syrian refugee who was a ISIS soldier was thwarted from entering a music festival in Germany by alert security guards. The subsequent detonation interruptus managed to kill only himself and injure nearly a dozen. (1)  ISIS claimed this attack despite its obvious failure. Within a week a mass-shooting by a dual-national, Germany & Iranian, young man killed 9 and injured 36. The shooting left Germany in shock and would’ve been an easy case for ISIS to claim credit for.(2) But they didn’t. And it later turned out that the young man had been raised secularly, and if anything leaned ultranationalist with Aryan sympathies versus Islamic.(2) Likewise in the early summer of 2017 a powerful truck bomb exploded in Kabul leaving nearly 500 dead. This occurred on the eve of ISIS’s annual Ramadan offensive. The bomb exploded during a week where ISIS’s Philippine’s affiliate, Abu-Sayeff, had already raised the black flags over Marawi. ISIS could’ve easily claimed credit for the Kabul attack. But instead remained silent. No one has taken credit for that attack through today but is widely believed to be the work of the Haqqani subsidiary of the Taliban, ISIS’s competitor in the region.

In the two weeks since, much ink has been spilled trying to understand these false claims. Unfortunately, the analysis follows a form of common condescending mockery. These “talking down” approaches have a storied history. Rumsfeld’s dismissive name-calling as “dead-enders” and “thugs” of ISIS in its earlier form of AQI. President Obama tsk-tsking ISIS, in its current form as the “JV team” to Al Queda in January 2015. After ISIS took over 2/3rd’s later that year, an equally ineffective meme-as-strategy spread. That calling ISIS “DAESH” would hurt their feelings and cause them to collapse. (3)  The paternalism implicit in these viewpoints: that western analysts are ‘adult-thinkers’ and ISIS is behaving ‘as children’ inhibits the kind of sober analysis which prevents, or at least mitigates, the sort of catastrophic policy blunders that follow.

Since Las Vegas, variations of these approaches tend to treat Salafi-takfiri groups as immature juveniles and proceed from that base to theorize that ISIS is ‘desperate for attention’ or ‘willing to claim anything’ to remain relevant after the loss of territory in Iraq or Syria. (4,5,6,7) Two common examples of the “ISIS will claim anything” viewpoint is the so-called Caliphate incorrectly claiming credit for a Milan mass-shooting in a casino that killed 37. In that incident an indebted gambler was to blame. The second commonly cited ‘false claim’ was when a woman with no connections to the Salafi-takfiri group smuggled explosives into Charles De Gaulle airport, but ISIS took credit nonetheless.

This might make sense if ISIS only issued claims sporadically, and made infrequent attacks like Al-Queda.  For us, the Las Vegas attack is the only one we paid attention to last week.  For ISIS? It’s just one of a dozen. All the rest accurately. Since Las Vegas ISIS has taken credit for bombings that killed dozens against a Shia Mosque in Kabul, Afghanistan and their former capital in Libya Sirte; as well as the downing of a Russian helicopter in Syria to name a few. So many claims of credit in fact that the intelligence group SITE publishes a weekly summary replete with its own table of contents. (8) 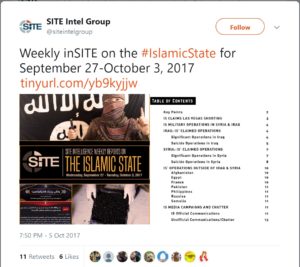 Summary of ISIS attacks during week of Las Vegas attack.

So, while some western analysts are focusing on the 2-3 false claims of credit, ISIS is legitimately claiming credit for scores of attacks it does conduct all over the world.  Groups like SITE, which study ISIS for a living, are providing more careful analysis indicating that in the past when ISIS has been challenged on claims, it has provided proof later such as the downing of Russian aircraft over Egypt. (9)

Although new evidence may create a firm link between ISIS and Paddock, settling the answer, in its absence we are left to review four facts.

Specifically, to #4 – ISIS has attacked concerts, casino’s and airports before. In the November 2015 Paris attacks ISIS killed nearly 90 people attending a music concert. This formed the bulk of a multi-pronged attack which included an attempted suicide bombing a sports venue and street attacks killing 130 people overall. (10)  ISIS has attacked casino’s several times in Iraq. (11)  In May 2017 an ISIS bomber detonated themselves at a concert in Manchester killing over 20. (12)  And ISIS’s successful attacks on major airports includes both Belgium’s Zaventum attack in March of 2016 killing 18 people and wounding 135 and the Ataturk airport in Turkey just 3 months later killing 48 people and wounding 235. (13,14)

These are not the acts of a petulant teenager we can condescend as “desperate” or “irrelevant.”  ISIS still maintains a pace of global attacks that vastly exceeds Al-Qaeda’s best(worst) performance.  ISIS may be losing in Syria and Iraq, but it is more than punching above its weight worldwide. ISIS has repeatedly called for attacks against Las Vegas for the last year. (15) The latest being as recently as May of 2017. (16) Just this week the FBI released details of a thwarted attack in NYC by three ISIS sympathizers which represents an eerie hybrid of the Paris attacks and Las Vegas: a combination of bombing subways and targeting music festivals and concerts for mass shooting. (17)

The InfoMullet’s concern with Las Vegas is not that ISIS falsely claimed credit to maintain relevance, but simply claimed credit because it believed it had legitimate reason to do so. Either ISIS knows, or at least has reason to believe, it has operatives or sympathizers targeting Las Vegas casinos, music festivals, or both. When a mass-casualty attack emerges involving a casino, a music festival, and Las Vegas – ISIS launches the prepared remarks to take credit.

The second concern of the InfoMullet deals with a new subset of attacks that bridge traditional terrorism and active-shooting events.  The InfoMullet describes these incidents as High-Score Terrorism. High-score terrorism is a specific kind of mass casualty attack perpetrated by one or a few actors whose sole goal is to ‘beat’ the casualty count and horror of previous mass-casualty attacks.  A form of Werther terrorism(18), inspired by the media sensation on previous attacks, high-score terrorists aren’t particularly promoting a specific agenda, political belief, or religious ideology. Instead they see themselves as competitors against other terrorists and mass-shooters in a sort of real-life first-person-shooter hall-of-fame. High-score terrorists perversely want to see their name at the top of the kill board after a HALO match, except in this case the match is played out in real life.

These attackers study previous mass-casualty attacks and seek to learn from them, the better to ‘optimize’ the best approaches and conditions to create their own mass-casualty incidents. We know that both Ho (VA Tech) and Lanza (Sandy Hook) fit this profile. Studying past-shooters and seeking to best their efforts. Ho studied the Columbine Shootings intensively and Lanza studied Columbine, Ho’s own efforts at VA Tech, and the horrific July 2011 Norway attacks. (19)  Brevik, the perpetrator of both a car bombing and mass-shooting in Norway holds a revered place among high-score terrorists. Having killed 77 and wounded nearly 320 in the two attacks Brevik retains the “high score” of single-actor attacks of this nature with no apparent ties to organized groups. And though Brevik certainly was promoting an ideology, anti-immigrant hatred, he does not appear to have been supported by organized groups.  This is characteristic of “high-score” terrorists who concoct extravagant plans in isolation so that they won’t have to share any of the credit.

Although Paddock, fortunately, did not match Brevik’s toll in fatalities – the InfoMullet is concerned that he innovated several tactics and techniques. Given the widespread media coverage and sensationalism, the Las Vegas shooting will now be studied by future “high-score” terrorists seeking to match or beat his score.

A following article deals specifically with coming to grips with high-score terrorism.

* The InfoMullet reserves the right to private ramblings and speculation carried out in private correspondence or in response to inquiries. Most of which will be just as bat-shit crazy as the mainstream media but at least it’s not published for all to see and mock in retrospect.