TLDRUpFront: With the successful North Korean launch of a nuclear-capable ICBM capable of hitting Washington, DC, putting the entire US within range, the generational delusion that diplomacy can resolve this must end. The InfoMullet makes the disheartening case for preemptive nuclear strikes on North Korea. 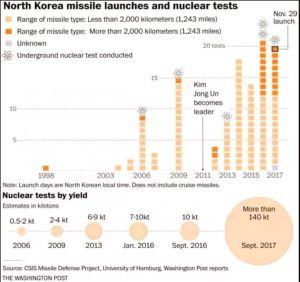 A dangerous work in progress.

FullContextintheBack:  North Korea conducted another test of its Hwasong-14 yesterday.  The missile flew nearly 2300 miles up into the atmosphere, landing only 620 miles from where it began, suggesting a near vertical launch. This indicates the missile was capable of hitting Washington DC, putting most of the United States within range. (1) In response to a prior underground nuclear test that was suspected of being a hydrogen bomb the Infomullet set out a three part ‘intolerable threshold’ test:

If yes to all three. We’ve reached what I would refer to as an intolerable threshold. And either Russia, China, or the US will act preemptively and soon.”(2)

We have now conclusively passed the third part of the test. Though it appears the previous underground test was a boosted nuclear bomb, and not a layered or actual hydrogen nuclear bomb – these are distinctions without a difference. (3)  North Korea has already proven it can miniaturize some form of nuclear warhead and put it on an ICBM getting partial credit on the second part of the above test. (4)  And it appears to be working on a submarine based ICBM capability that would allow it strategic surprise for a launch with a window of detection much narrower than the current 1-hour load. (5)

The case for a pre-emptive nuclear strike on North Korea now stands here. With an estimated range of 13,000km based on Tuesday’s test, the North Korean missile appears to be capable of landing a single 500kg warhead nearly anywhere in the continental United States.(6) Although it’s unlikely to have pinpoint accuracy in its targeting due to the limited re-entry vehicle configurations, it could land within a few miles of its target. (7)  The closer to the west coast the strike is made, the larger the payload can be.  The chart below, from the US-Korea institute at John Hopkins shows how far a Hwasong-14 can travel depending on the weight of the payload. The lighter the payload, the further the distance. Note that this chart, which indicates an outer range strike of New York with a 500kg nuclear weapon – is now 2,000km out of date.  The latest launch demonstrating a range capability 18% further than what is displayed below, meaning all US targets would shift to the right, increasing the weight of the payload that could hit them. (Or near them.) 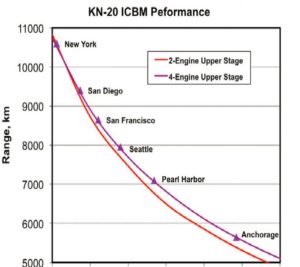 Targets at the intersection of range and payload.

It’s simply inconceivable that the US would tolerate even a near-miss nuclear strike on its own soil. Given the nature of most major metropolitan areas with spread out suburbs, close is good enough. It’s equally hard to imagine that even absent a direct attack – the US, Russia and China could or would tolerate overflights of their own or allies territories with potentially nuclear tipped missiles.  A crash could spread contaminated material and spark an economic panic.

In any of these scenarios a response would be mandated. And even under just war theory the proportionate and reciprocal strike in retaliation would be at least nuclear in nature. If the intent of such a retaliation was to ensure it could not happen again – multiple nuclear strikes would be necessary to successfully dismantle the widely dispersed North Korean nuclear infrastructure while simultaneously eliminating the threat of conventional artillery barrages on South Korea.

It may not even be a launch intended to provoke such a response that creates the scenario which leads to nuclear war. Consider a calculation threshold that represents the point at which Kim has pushed too far and retaliation occurs. That threshold is unknowable to Kim, it lies in the decision making apparatus of the nuclear equipped powers in the world capable of retaliating against North Korea (US, Russia, China, Britain, France). It’s plausible that Kim might not even intend to cross that threshold, but not knowing what world leaders will tolerate do so inadvertently as part of a maneuvering initiative.

But to be clear, if there is a delay until the calculation threshold is crossed – then the timing of such an action lies wholly within the whims of North Korea. It may disperse it’s nuclear assets in advance, or already have artillery ready to attack on any indication of retaliation – thus limiting the effectiveness of retaliation. Or more properly, demanding an increase in the severity of retaliation to ensure effectiveness.

The case now clearly exists for preemptive self-defense, defined by LawFareBlog as:

Preemptive self-defense tends to have a longer time horizon. In this case, a state often views an opponent’s particular, tangible actions as almost certainly developing into an armed attack against it. While there may be some time before the opponent can launch the attack, the opponent’s actions indicate an attack is likely should developments continue.

The repeated tests of nuclear-capable missiles, increasing range and payload capacity. The continued efforts to increase the destructive capability of its nuclear arsenal while seeking to miniaturize warheads to put them on ICBM’s. The modification efforts to make nuclear-attack capable submarines.  These are particular and tangible actions.  This is not a Trump problem, this is a Kim problem.

Unfortunately the same 20 years of feckless diplomacy that has allowed this threat to manifest, undoing a century of non-proliferation, has also eliminated conventional strikes as a valid form of preemptive defense.  At this point – given the North Korean artillery posture against Seoul and the ability to set up a Hwasong-14 on a ‘deadman’s switch’ that can fire within an hour after any strike against it, even if we decapitate the regime, the only logical preemptive action is a nuclear strike on multiple targets simultaneously.

The counter-arguments, that we can either accept a nuclear capable North Korea via some deterrence based posture via a reincarnation of MAD, wait a bit longer to see where their technology develops or simply “learn to live” with it as we did in the cold-war gravely miscalculates three key elements.

The first is that throughout the Cold War, Russia contained its tests to non-aggressive measures. It did not launch its missiles over our allies, where even an accident or malfunction could trigger nuclear war. At some point, North Korea will cross the calculation threshold and retaliation will come, at a moment neither side has fully prepared for it. The second is that technology advances in leaps and bounds with a doubling period faster than we often anticipate. This has been evidenced by every estimate of North Korea’s outer capability being exceeded by the very next test for nearly a year now. If we estimate a window of delay wherein we can wait to see what develops, we risk overestimating the window and missing the point where North Korea’s advancement has made it a defacto nuclear superpower. The third and final factor is that during the Cold War we could not attack and destroy Russia’s nuclear capability without accepting mutually assured destruction of ourselves.  North Korea cannot destroy us, it cannot destroy the world, but it itself can be destroyed. And if it is destroyed, it preemptively defends ourselves, our allies and unaligned neighbors from the risk of intentional or erroneous acts that would make the human costs of 9/11 look like a glancing blow and send the world economy into free fall.

Unfortunately, North Korea must be destroyed.