TLDRUpFront:  The New York times interviewed sixty close aides, friends, associates and politicians to reconstruct a typical day in the life of President Donald Trump. West Wing it is not. 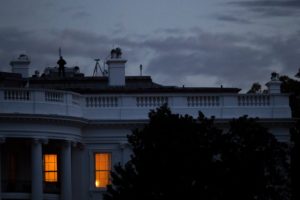 Trump is working hard – burning the Twitter-light at both ends.

The kind of daily-battle of self-preservation described by the New York Times(1) is typical of late stage paranoid dictatorships. What the dictatorships have going for them at that point is usually multiple internal-security and intelligence agencies watching the population, reporters, each other.

The problem however is that the daily battle of self-preservation consumes cognitive time to focus on the immediate, and often irrelevant, missing the over-the-horizon threats that may be distant, yet existential.This is exacerbated because Trump doesn’t have any agencies, or even strong-factions to help him. Trump has largely himself, an effective weapon it turns out – but a limited resource within finite time.

President Trump has benefited from a quiet year with few crisis externalities – a grace-period buffer he has squandered with little-to-nothing to show for it. The midterms begin next year, the inevitable first-administration scandals will begin to appear shortly after that, and the daily battle of self preservation – starting in the hole of the lowest approval level of a modern President at this point in their administration, will only get harder.

The InfoMullet’s tinfoil-hat conspiracy, which I’m not putting serious stock into but is fun to mentally model as a “what-if” is that Trump may realize in places he won’t voice that his days are numbered. And the job is not nearly as fun or powerful as he mistakenly believed. As the grind wears him down, and the accumulation of investigations – he positions his daughter, Ivanka Trump, to run for the 2020 or 2024 GOP Presidential nomination as his own familial version of continuismo. Again, I don’t put much stock in this theory. But if it comes true, I’ll be sure to take full credit and go on a book-tour.