TLDR UpFront: After a serious US communications blunder about intentions along the northern Syria border, Turkey intervened militarily into Syria Civil War for the second time. Launching artillery strikes against the Kurdish town of Afrin northwest of Aleppo, Syria – a ground movement is expected soon. Though limited in scope – the move may seek to consolidate a zone-of-control for Turkey inside of Syria. Although Turkey had crossed into Syria before to fight ISIS – this is the first major post-ISIS new conflict to emerge in Syria. And it pits US backed Kurdish Syrian Defense Force against estranged US NATO ally Turkey. 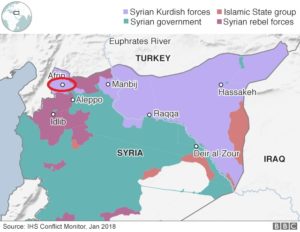 FullContextintheBack: During the long-running Syrian Civil War local Kurdish towns organized their own “self-defense” militias organized at first in reaction to the Syrian dictator Assad.  Known colloquially as the YPG and, for a woman’s military unit, the YPJ they played key roles in many of the major conflicts of the civil war in the northern part of Syria. Later incorporating Arab, Assyrian and other ethnic groups they expanded their reach into the larger SDF – which included coordination with the Peshmerga and conducted operations across northern Iraq and Syria. The YPG/YPJ and later SDF were active in the multi-year Siege of Aleppo, what InfoMullet has described as the “Battle of Five Armies” chronicled here, here and here. These Syrian Kurdish units also came to the aid of besieged Kobani, which marked the US interest with airpower against ISIS in the Syrian Civil War. And also a key turning point on Syrian expansion of the so-called Islamic State. Since then the SDF has done the brunt of ground-fighting within the US coallition representing an entirely new model of intervention than the Iraq invasion. Local ethnic fighters in the SDF took point and provided troops, supported by US combat advisers, advanced equipment, and US airpower. The SDF was estimated at its height to be between 50-60,000 strong and over 2015-2017 helped push ISIS back and capture Ar-Raqqah.

During the period covering the rise of the SDF Turkey watched warily from across the border.  However increasingly occupied with its own descent into authoritarianism since the failed-coup and continuing problems with internal stability,  President Erdogan could do little more than lash out from time to time to anything even remotely looking like Kurdish interests.

However, Turkey allied last year with Iran and Russia in a Red Wedding where the three states agreed in principle to stabilize Syria.  This was seen as giving Turkey the green light to, at its leisure, exert a zone of influence along its borders projecting into Syria. One red-line of interest is that the Kurds not be allowed to consolidate their territorial gains made in the conflict against ISIS and formalize them into a new Kurdistan state.

This isn’t the first time that Kurdish desires for greater recognition have prompted military action since the decline of ISIS. In October, Iraq forces stormed and seized the city of Kirkuk in Iraq, displacing Kurdish Peshmerga forces.  Despite US backing in the fight against ISIS, President Trump largely declared the Kurdish v. Shia conflict in Iraq as an ‘internal matter’ and refused to get involved. (1)

We didn’t start the fire…wait…yes we did.  Never mind.

But where President Trump imitated Pilate to wash-his hands of Kirkuk – in Syria he washed his hands in gasoline, lit them on fire and began slapping himself in the face. Not a party to the Red Wedding agreements, the US  recently tried to exert it’s own imprint on local maps by announcing they would begin training a 30,000 strong largely Kurdish border-security force to monitor the very area Turkey was handed as its zone-of-influence by Russia and Iran. Turkey, not irrationally, interpreted that as trying to establish a Kurdistan state. And unlike President Obama, Turkey appears willing to enforce its red lines. Even though the White House reversed-course faster than one can say “shithole leadership” Turkey began preparations for armed intervention a few days ago.  (2)

Turkey is not declaring this a land-grab or an explicit attack against Kuridstan. Instead they take the position these are all counter-terror operations. Turkish Defense Minister Canikli made this clear, linking any Kurdish activity with terrorism when he said recently: “I don’t want it to be misunderstood. It has begun. All terror networks and elements in northern Syria will be eliminated. There is no other way.”(3)

This nuance is key to understanding the context of these conflicts. When Russia attacks anti-Assad Syrian rebels it describes them as “ISIS” – even while largely leaving ISIS alone.  There is at least one Kurdish group designated as a terrorist organization by the US operating within Turkey named the PKK. (4)  However, groups like the SDF which were largely organized for self-defense, first against Syrian military forces in the civil war and then against the rise of ISIS, are not closely aligned with those terrorist groups.  It’s impossible to fully state with confidence there have been “no” interactions, the map in that part of the world is only slightly more confusing than a Polluck painting. But with reasonable confidence one can interpret Turkey’s action as being more directed to rising Kurdish regional influence than true “anti-terror” operations.

So although President Trump and the US military may have given the pretext for justifying intervention right now – this may have been in the cards all along. Turkey has a national-interest to create a buffer-zone on the southern side of the Turkish-Syrian border. If Afrin falls, Turkey will control an uninterrupted 200km zone of territory west of the Euphrates in Syria, itself buffered by Turkish-backed Syrian rebels. (5)

This isn’t World War III yet.

So far the intervention is limited to shelling. And Afrin is isolated from the main Kurdish ethnic areas by contested regions.  Turkey is not, yet, conducting a full-border invasion into more eastern provinces with far heavier Kurdish presences. For media literacy purposes keep an eye out for over reactionary memes purporting “WWIII is on!” or otherwise doom-saying what is not a surprising development in the area. Though blaming the Trump administration for providing Turkey with a casus belli for this one is fair – it was probably likely to happen anyways. Finally memes or talking points likening US provision of weapons to the SDF with provision of weapons to ISIS is not correct. (They were opponents not compatriots.) Though some battlefield scavenging inevitably happened – that’s not the same as having a policy of secretly arming ISIS. The area is confusing, and dangerous, enough without overly complicated Rube Goldberg conspiracy theories muddying the waters.

Things May Get Awkward

That’s not to say there isn’t substantial risk of instability and inadvertent signals leading to escalating conflict. Important now is to watch the reactions of Russia and the US.  As a party to the Red Wedding agreement, and an ally of Assad, Russia has a key ability to influence the activities in the region. An influencing role the US lost-out on when President Obama mistakenly imagined Russia’s intervention into Syria would go as badly as his own in Libya. (6)  As for the US – it’s not entirely clear what policy the US will take and whether it will be announced through press statement, military act, or Presidential Tweet.  Without a doubt the White House stepped in it by declaring without consultation unilateral armament of a standing Kurdish forces.  But that doesn’t offset that, at least in the InfoMullet’s perspective, the SDF have been the strongest US allies in the country in the conflict against ISIS.  They should not be abandoned solely because Trump is inept (we would have no allies left) but nor should the US rush into even a proxy-conflict with its partner Turkey. Since both are still party to NATO – technically – either country, if attacked first by the other, could call for Article 4 Consultations or even Article 5 collective defense.

Which could get awkward indeed.