TLDRUpFront: Turkey announced additional targets in its intervention into northern Syria including strategic towns on the road to Kobani. Iraqi Kurdish Peshmerga, invoking the spirit of Kobani, threaten to respond by deploying into Syria. Meanwhile Russia and the US largely stand behind their respective partners without taking much of an active role as the conflict grows. 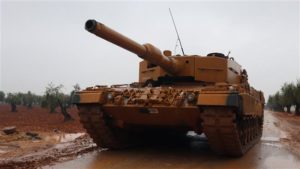 We come bearing an Olive Branch.

FullContextintheBack: Fighting continued in and around Afrin in northwestern Sryia as Turkey continues “Operation Olive Branch.” Ostensibly targeting PKK-terrorists and ISIS militants – the actual target appears to be self-defense militias of the YPG who hold the towns Turkey is attacking.

Turkey currently has between 6,400 – 25,000 fighters now on the ground in northwestern Syria depending on which estimate is used. (1)  This force is supporting local-militias of the Free Syrian Army (FSA) and have had some success taking villages and key positions from the Kurdish YPG.  The death toll has already reached over 500 when both sides are combined. Signaling an expansion of the conflict was Turkey’s announcement that Manjib, a city east of Aleppo, is now being targeted  (2) Manjib is strategic because it sits atop two routes that both cross the Euphrates. The northern route leads to Kobani, and the southern route into the oil-rich regions around Ar-Raqqah.  Taking Manjib would allow Turkey to rapidly expand east and southeast if desired.

In Iraq – a threat to deploy the Peshmerga into Syria has been made by Mali Bakhtiyar, the leader of the Patriotic Union of Kurdistan (KUP) which alongside the Democratic Party of Kurdistan (KDP) governs the autonomous region of northern Iraq comprised in majority of ethnic Kurds. Quoted in Rudow, considered a media-mouthpiece of the KDP, Bakhtiyar stated:

“Countries of the region, in particular Turkey, knows about our stance in Kobane…If we can, we will help Afrin now. If they allow us, we will deploy forces to Afrin…But if they allow us, before deploying forces, we will send a delegation to Ankara for dialogue. We prefer dialogue over war.” (3)

The reference to Kobani is loaded with context. In late 2014, ISIS dramatically seized much of Iraq in what came to be known as the Anbar Offensive. The route of Iraqi forces left abandoned US military equipment which ISIS took possession of. Pivoting ISIS then brought the heavy-arms into Syria forcing a breakout effecting a breakout of their previous positions around Ar-Raqqah.  The rapid westward expansion of ISIS along the northern border of Syria and Turkey was only halted at Kobani, a historic border crossing town just inside Syria. For weeks Turkey prevented Kurdish fighters from Iraq using their territory to cross and support local Kurdish self-defense militias defending the town against ISIS brigades. The fighting played out in sight of the Turkish borders leading to riots and protests which Turkey met with force.  Under pressure from the US, and with the real risk of a Kobani collapse leading to a cross-border incursion by ISIS, Turkey relented and allowed the Iraqi Peshmerga to deploy in support of the city.  These fresh ground troops – along with the first deployment of US airpower in Syria, combined with the local fighters in pushing ISIS back out of the city. Over time those self-defense militias became battle hardened troops, known as the YPG, and later joined a coalition of Arab and Kurdish groups colloquially referred to as formed the Syrian Democratic Forces (SDF).  The SDF was the US partner in pushing ISIS out of Syria granting essentially autonomous control to Kurdish fighters of many of the towns that Turkey is now targeting. 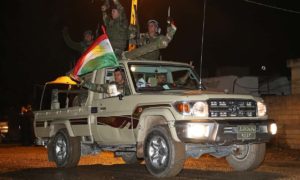 The “current situation” refers to the difficulties the Iraqi Kurds have experienced on their own after the ISIS’s collapse. This includes the loss of the oil-rich city of Kirkurk, which Kurds had been successfully defending against ISIS since the Iraqi Army fled in 2014. That humiliating rout – losing the entire city in less than 24hours to Iraqi conventional forces backed by Shia militias – exposed bitter internal rifts inside the Kurdish region of Iraq. Many Peshmerga blamed their leaders for betraying the troops out of political expediency.  And that memory is also being invoked as at least Twitter user who appears to belong to belong to a member of the Barzani Tribe of Kurds has posted a string of Tweets expressing solidarity with the Afrin Kurds and the YPG.  (The former President of Kurdistan and leader of the PUK Masoud Barzani hails from the Barzani tribe).(4) Videotaped alongside fighters and what appears to be either kneeling fighters or prisoners, “Rebas Barzani” sends a warning to Kurdish officials that individual fighters were more than willing to ‘self-deploy’ to Afrin to join their ethnic cousins.  He also threatens to ‘hold accountable’ the “betrayers”, a reference to politicians like Bahktiyar who are seen as hedging on the promise of Kurdish self-rule and mutual support. (5)
Although it is unclear logistically how Iraqi Peshmerga would get to Afrin easily – it’s less uncertain that a formal response by the Kurds in Iraq could risk creating a regional war that crossed national boundaries. Turkey borders both Kurdish enclaves, and has in the past intervened into the Iraqi Kurdish north on counter-terror operations.

Other actors in the region seem to be content letting events unfold.  Russia weakly protested the Turkish intervention publicly even while privately coordinating to allow Turkish jet fighters to fly and strike targets in and around Afrin. This fits with the general understanding reached between Turkey, Russia and Iran about zones of influence inside of Syria this time last year. President Trump meanwhile held a personal phone call with Turkish President Erdogan over the intervention, though it’s not clear what that accomplished.  This mute response comes after a dramatic failure of US communications may have helped spark the current conflict in the first place. (6)