TLDRUpFront: A Russian fighter jet has been shot down in rebel-held northwestern Syria near Idlib.  Idlib is south of where Turkey has intervened against the Kurds in Afrin and it is not likely these events are related. Idlib has been under the control of Al-Nusra, an Al-Queda affiliated emerging-state actor for several years. According to reports the pilot is dead – either killed in battle with rebels or from injuries. 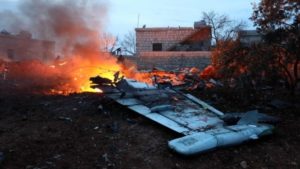 The BBC is reporting that a Russian military plane has been shot down over rebel-held Idlib province in Syria.(1) Video purpports to show a Sukhoi-25, an older aircraft in the Russian fleet, being shot down and pictures on the ground depict wreckage of the plane.  Idlib province has long been the bastion of an Al-Queda aligned group that has gone by various names including Al-Nusra and Jabhat Fateh al-Sham.    It was as Al-Nusra in 2012 that they were joined by a small remnant of the origianl Al-Queda in Iraq who later came to be known as ISIS after they formally split from Al-Queda.  Al-Nusra has remained Al-Queda’s main frontline battle group in the region participating heavily throughout the Battle for Aleppo. From the beginning (when it was Al-Nusra)   through the rise of ISIS and introduction of Shia militias and through its role in founding an anti-Syrian coalition known as Jaysh al Fath, aka ‘the Army of Conquest ‘which almost broke the siege. Throughout this time Al-Nusra has governed Idlib and its surrounding area as an emerging-state actor, though never with the breakout capability that ISIS demonstrated in the east.

Idlib is nearly 80km south of Afrin, where Turkey is currently intervening against different rebel groups aligned with the Kurdish self-defense militias. Bordered heavily by mountains it is unlikely that the shootdown of the Russian plane and Turkish operation are connected.

Recently a UN monitor warned that the long-standing siege of the Idlib province by Russian and Turkish forces was creating a crisis for civilians in the area alongside increasing air strikes.(3)  These tactics mirror Russian and Syrian Bashar Assad’s successful combination of the use of starvation and punishing air strikes to break resistance in Aleppo, ending the multi year siege there.

Now with the shooting down of a Russian jet it is unlikely that conditions will improve for those on the ground in Idlib.  This video appears to show the pilot ejecting from the plane before it crashed. Reports indicate he was killed in battle or died shortly later. (4)   The BBC reported that retaliation in the form of cruise missile strikes by Russian naval ships on the area have already begun.   However, it is unlikely the escalation will be significant or sustained – this is Russia’s 45th military personnel lost in Syria and it’s third aircraft. Turkey previously shot down a Russian fighter jet in 2015, and rebels have also downed a helicopter.