TLDRUpFront: Israeli entered the Syrian conflict today after a series of escalations that began with an Iranian drone-flight into Israel.  By the end of the day one Israel aircraft had been downed by anti-aircraft fire and over a dozen Iranian, Syrian and Hezbollah positions in Syria had either been struck or involved in counter-attacks. This marks the sixth foreign power and tenth major combatant to enter into the Syrian Civil War.

In what might be the first ever conventional conflict sparked by a drone, Israel entered the Syrian War today. According to the NY Times an Iranian drone entered Israeli airspace which led to a rapid escalation of force. An Israeli air-strike destroyed the drone command center, inside Syria. However, on the return flight an Israeli F-16 was shot down by Syrian manned anti-aircraft systems. That led to a series of retaliation strikes against Iranian positions inside Syria. (1)

The drone may have been of a model reverse-engineered from a US military drone captured by Iran in 2011. (2) 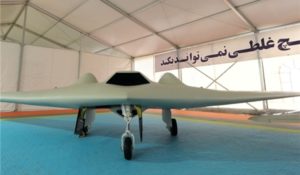 It starts with something that looks like a toy – but escalates quickly.

Although Iran denied that it’s drone had entered into Israel territory, the IDF released video that it said showed the drone flying over, and being destroyed, in Israeli airspace. 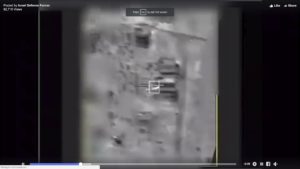 In the same release an Israeli military spokesman said after losing an F-16 while returning from destroying the drone’s command center in central Syria “it later targeted at least 12 other sites ‘including three aerial defense batteries and four Iranian targets that are part of Iran’s military establishment in Syria.”Separate statements from both the Syrian regime and Hezbollah claimed to have intercepted many of Israeli’s missile-attacks and disputed the claim of wide-spread damage. (3)

This is not the first time Israel has struck into Syria as reported by the Long War Journal:

Since the outbreak of war in Syria, Israel has launched dozens of airstrikes against its adversaries’ supplies, installations, chemical-weapons facilities as well as high-value targets, such as Brigadier General Mohammad-Adli Allah-Dadi in 2015 and Hezbollah commander Mustafa Badreddin in 2016. Syria’s air batteries that include old Soviet systems such as the S-200 have failed to hit Israeli jets and deter strikes. The Russians, who have deployed their S-400 system to Syria, have not intervened.(4)

This is the second modern fighter-jet downed recently in what is becoming Syria’s increasingly hostile and crowded skies. If Israel diverges from past limited strikes and remains involved in anything more than today’s air-ground skirmish, it will be the sixth major foreign power to enter into the Civil War to serve its own interests and the second this year since Turkey intervened militarily in Operation Olive Branch this January. These major foreign powers currently include: Russia, Turkey, Iran, Hezbollah and the US led coalition. Counting the Syrian regime and major local actors such as the Syrian Defense Force (Kurdish), ISIS, the Free Syrian Army and Tharir al-Sham which is backed by Al-Queda brings the total number of major combatant powers in Syria to ten.