TLDRUpFront: It’s been a busy week outside the United States as well for domestic disturbances. In Iraq, Egypt, Hong Kong, France, Ecuador and Britain domestic instability that didn’t originate from President Trump took center stage.  Taken as a whole it points to a gathering trend towards instability. 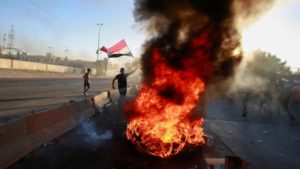 Young Iraqi’s take to the streets against their government.

A general protest has been occurring across the country among younger Iraqi’s that has resulted in over 100 killed and several hundred wounded. It appears the protest origins are not aligned to any one political faction – as past protests have been orchestrated by the many different political forces seeking influence on the streets. The protests do not appear to be for or against any one government administration, but against systemic problems of corruption, unemployment, poor economic conditions, and a lack of reconstruction and recovery being made from 2014-2017 conflict with ISIS.

The Iraqi government, under Prime Minister Abdul-Mahdi was mostly silent as violence escalated throughout the week. There has been a near total blackout of internet communications and an emergency curfew was instituted. There has been an increasing use of snipers to kill protesters, and in some allegations, target police officers themselves, though I haven’t been able to confirm that. Who is commanding those snipers, who gave them the orders, and who they work for is a big question mark because Iraq does not have a unified nor unitary security organization with many separate bodies (a holdover from Saddam’s proliferation of security apparatuses); paramilitary forces that arose to combat ISIS and haven’t disbanded, as well as foreign influence by both the US and Iran in the country. But condemnation against the violence, and in support of the protesters are growing as two powerful religious figures within the Arab Shia ethnographic community Grand Ayatollah Sistani and Grand Ayatollah Muqtar al-Sadar have both released statements condemning attacks on the protesters and calling for investigations of the security forces. Sadar has a long history of self-serving political agitation, but al-Sistani has aimed for broader reforms and greater democratic representation not tied to any one specific political faction.

On the streets there was confusion over who was to blame for the earlier deaths as there are many armed groups in the country. There’s state security forces. PMF’s and Iranian sponsored militias still present in Iraq that were used in stopping ISIS – but never disbanded or left. Others blame the US-Iran proxy conflict of playing out here. Some have even suggested an Iranian Quds battalion had infiltrated the country. The more recent violence however is more clearly originating from security services themselves, which have always widely varied in training and resources. Something to keep in mind is that the young people protesting were under six to seven years old when the US invaded Iraq, and do not have a strong memory of Saddam controlled Iraq either. The war that looms largest in their mind was the recent one against ISIS and they have no memory, or tolerance, for “the way things are done” that older generations, which struggled to make a clean break from the corruption endemic under Saddam’s regime.

Whereas Iraq’s protests continued escalating this week, Egypt’s sputtered out under a brutal crackdown by Egyptian leader Sisi and his security forces. Thousands have been detained, often with only loose connection to the protests themselves or on spurious charges. A call for protests on Tuesday saw little significant response, but this only indicates Sisi has found a temporary solution. So many have been arrested and detained that existing detention facilities cannot handle them all. Tent-cities have been set up, often without access to sufficient plumbing or food in overcrowded conditions. Which may sound familiar…

If Iraq is starting, and Egypt is ending, Hong Kong continues to escalate into a more general form of uprising from sustained protests over the summer. What were intermittent direct-action conflicts with police are now becoming more common and more violent. This week was China’s 70th anniversary of the founding of the communist state but Hong Kong protesters were having none of the pomp and circumstance. This put a big black eye on China’s celebrations and police really tried to clamp down. This resulted in the violent clashes earlier in the week, featuring Molotov cocktails and improvised weapons. For the first time a protester was shot by police during a melee involving protesters and officers. According to the video protesters succeeded in taking on an overmatched small police group and in responses one of the officers drew his sidearm and fired on the protesters. This isn’t the first-time ammunition has been fired, but the first time I’m aware of a protester was shot.

In response Chief Executive Carrie Lam invoked an old colonial power to declare a state of emergency and thus institute any laws she deemed necessary for public safety. This included at first a ban on face-masks which are common in the city due to air quality but have become associated with anti-surveillance tactics by protesters. The ban was ignored over the weekend with thousands marching wearing masks, mostly peaceful, but still with a significant number of clashes involving bricks and petrol bombs. A request for emergency relief by two dozen local legislators to block the emergency declaration was turned down by the Hong Kong Supreme Court on technical grounds, but a larger inquiry has been expedited to be heard in October. This raises the possibility of the Hong Kong Supreme Court essentially “picking a side”, in the eyes of China, between the protesters and pro-protest legislators and their own appointed leader in Lam.

A green on blue attack occurred when a police officer with Salafi-takfiri influences snuck two knives into police headquarters of Paris and killed four coworkers before being shot dead himself. This incident bears many hallmarks with the Fort Hood shooting by Major Nidal Hassan in that there were warnings raised of the radicalization of the police officer, named Mickaël Harpon to higher level officials, but no action was taken.

Although this attack is within the context of a long-running campaign of Salafi-takfiri violence within France including previous targeting of police, occurs at a crucial time when police morale is at an all-time low. The combined pressures of over a year of Yellow-Vest protest duties; where police actions are frequently and sometimes justifiably being criticized, a continuous state of emergency arising from a Salafi-takfiri campaign of intermittent violence stretching back to the Charlie Hebdo attack and subsequent Paris complex attacks of 2015; and a perception of not being given sufficient resources, pay, and support in this environment. Police this week were actually taking the unusual step of direct protest – claiming that these conditions had led to an increase in suicide among the ranks.

Originally it was not known whether this attack was related to worker-conditions, a personal crisis or Salafi-takfiri influences. I’ve held on reporting anything until the 72hours so the motivations and circumstances can become clearer.

In South America another democratic socialist country, Ecuador is enduring popular unrest because despite holding significant oil reserves, the price of gas has become unaffordable. If this sounds a lot like Venezuela’s struggles years ago it wouldn’t be far off. Ecuador is about ten to fifteen years behind Venezuela’s pathway. Whereas Chavez took power in the 1990’s and ground that countries economic performance into the ground under an authoritarian socialist approach, former President Correa took power in 2006 in a similar style political-economy regime change as Chavez repudiating the national debt, instituting a new Constitution authorizing greater state control of the economy, and putting in place massive subsidies across a range of commodities, including fuel. This led to sustained political unrest between the more classically liberal Congress and the socialist leanings, but much like Chavez initially enjoyed broad popular support Correa was able to prevail.

But over time Correa’s soft democratic socialism shifted to soft-authoritarianism (as frequently happens), and initially good economic progress in reducing poverty and improving the economy stalled and then reversed. Leaving the country to live in exile, Correa was replaced in 2017 by his own Vice President and hand-picked successor Lenin Moreno, yes named after that Lenin who handily won the election on a similar socialist democratic platform. But don’t judge a book by its cover because Moreno began working to reverse the changes made by Correa including reinstituting limits on Presidential terms, putting caps on increases in government spending, and unwinding the socialist economy. The country however still needed outside assistance and since Correa had repudiated the national debt, Moreno’s only choice was the IMF, which required removals of some subsidies. This was the immediate cause of the removal of the fuel subsidy in a country known for exporting oil and leading to the current unrest.

Both Ecuador and Venezuela offer a cautionary tale to those trying to institute democratic socialism on a platform that consists of large subsidies versus a more classically liberal political-economy of free-market enterprise. The democratic socialism evidences a better-before-worse pattern that garners large early support because of the reduction in price due to subsidies, but that is not economically sustainable and begins to fail within 10 years. That then leads the shift from democratic socialism to authoritarian socialism as protests against the state of conditions are cracked down, or a painful return to a free-market economy with the removal of subsidies. Instituting that kind of changes, conversely, often depicts a worse-before-better pattern – in that the removal of subsidies and needed changes to reign in government spending and increase the productive power of the economy leads initially to unrest but begins fixing the fundamental economic problems at the heart of the need for subsidies.

And from one self-inflicted economic implosion to another, we turn to Britain where Prime Minister’s Johnson continued inability to accomplish anything was on full display as the EU declined his latest negotiating efforts. As many have predicted, obtaining a “better deal” from the EU than the one Prime Minister Mays obtained, and which was subsequently voted down 3 (+/- 1) times, is beyond the scope of Johnson who talks a game of tough negotiation but appears hopelessly incompetent at actual negotiation. The failure to negotiate a deal sets up a Constitutional crisis as the current law is the Prime Minister is required to delay Brexit if there is no deal. And Johnson’s own lawyers were arguing in Court Friday that Johnson would abide by the law. However, on TV and in private conversations Johnson is indicating he has no intention to follow the law, daring the Queen to sack him and saying it would require an arrest warrant to get him out of 10 Downing Street.

You see what I did there? In standup we call that the callback.