Home  »  2020 NYE AMA   »   Q16: What areas are ripe for civil unrest internationally in 2020? What factors are feeding the potential conflict and how might it play out?
Spread the love

Ed. Note: This forecast was asked and answered prior to the Soleimani strike. 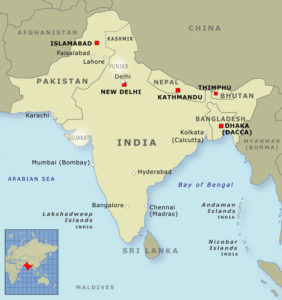 Over 20% of the world’s population lives on this map, and it’s at risk for mass instability in 2020.

2019 was a year of rising mass-movements not seen since the Arab Spring and its copycats and I forecast mass civil unrest and instability continuing to strengthen and grow in 2020 across a band that runs (roughly) from 30d North latitude southwards. This band covers Latin America, South America, Africa, and Southern Asia.  Countries currently experiencing instability in this band: Ecuador, Bolivia, Chile, Mexico, Lebanon, Iraq, Iran, Hong Kong, Ethiopia, Sudan, Algeria, Guinea, Cameroon, the Democratic Republic of Congo, Nigeria, Uganda, South Africa…and many more. All of these will continue to experience disruptive levels of civil unrest, protests, clampdowns and crackdowns.

Two new major areas of instability that I forecast will arise are in India and Bangladesh.

Areas where I don’t see instability, absent specific contingencies are in Russia and China.

Explaining the forecast.  In Q7 I describe several of the factors that lead to instability: a demographic youth bulge of fighting age males, relative socioeconomic comparison between these males and previous generations, and the ‘expectations gap’ when there is a failure to meet rising expectations.

Some of those are correlated with developing economies, oppressive regimes, areas with high childhood mortality or all three combined. Consider the feedback effect that either due to economic development, or stagnated/corruptive government, economic conditions remain low. In these conditions economic security is often gained through having multiple surviving offspring, and that requires even more births (and risk to the mother) when childhood mortality is high.

Now imagine that into that circumstance a global economic boom delivers temporary or marginal economic growth. Or some other factor causes a birth-surge, this population then gets drawn into the urban areas from the rural areas where conditions are often especially tough in transition (even if incrementally better than subsistence farming).  If that economic improvement doesn’t last due to macroeconomic conditions or is cut-short by the corruption inherent in oppressive regimes we can create a condition in the future that satisfies the criteria of increased instability risk. The youth bulge (from the birth surge) of fighting age men without jobs, who perceive themselves as having less opportunity than their fathers (because they have been crowded into cities with radically different circumstances) and a failure to meet rising expectation. This (I think) is a modified of the Growth & Underinvestment systems thinking archetype, where instead of economic growth in the positive loop it’s instability growth or decline and the balancing loops that control that loop are the factors I describe above. (Note to Self: This might be worth sketching out and adding to my conflict library.)

These dynamic conditions (beginning in the past and continuing today) of feedback effects are very apparent in the “band” of the globe that begins at 30d North and extends southward. Although the specific reasons are very country specific, there is a swath of countries that have been developing enough to have population booms that light the spark, but not enough to avoid the instability contagion. The causes vary and are too many to go into here.

Specific to Indian and Bangladesh is the 2019 Citizen Amendment Act. This act is a cornerstone of a Hindutva (Hindu nationalism) movement being spearheaded by Bhartiya Janata Party (BJP) (translated “Indian People’s Party”). The BJP has been around for a long time, but when the populist/nationalist wave began sweeping the world, they picked up the banner hard in Indian. In 2014 they won an outright majority of seats in the Indian parliament. Throw in their coalition partners and they control over 60% of the seats. The leader of BJP, Prime Minster Modi began pushing an expansionist approach of Hindutva policies including religious conversion, more bellicose posture versus Pakistan and greater repression of Kashmir, nativist economic policies and a host of other bad-idea theater. This set the boil into which the Citizen Amendment Act was passed. Briefly the Act distinguishes citizenship pathways in India based on religion, and notably excludes Islam as one of those religions.  Given the history of BJP this is taken as a move to disenfranchise the Muslim population in India.  And even though Muslims are a “minority” compared to Hindu’s in India, they still represent over 170M people. That’s a huge group within which to mobilize and agitate, and they are being joined by moderates and anti-BJP political movements from within the Hindu space.  This has already led to waves of protests, and crack downs, in December and I see this only accelerating.  Muslim-Hindu relations has always been the tectonic fault-line in India, even before the partition. But the partition by the British of a Muslim majority Pakistan and a Hindu majority India made this fault line visible. And the wars that have been fought since then have led to at times, a jingoistic nationalism and machismo in Hindutva opinions of Muslims, and in some cases vice versa.  There is no love lost between Hindu nationalist and Muslim populations – and if Modi keeps pushing on this fault line he may just get an earthquake.

This fault line also runs through Bangladesh, which lies on the east of India but joined Pakistan during the partition as a Muslim-majority country. It was known as “East Pakistan” then. But the Bengali subsequently fought a War of Independence and left the Pakistan Dominion becoming an independent country in the 1970’s. Given its large westerly neighbor Bangladesh and India have always been integrated in many ways not dissimilar from the US and Mexico. Like US/Mexico relations, there is a large illegal immigrant Bengali population in India for economic reasons.  Estimates range from 12-15Million. And the Citizen Amendment Act directly targets this population for expulsion and harassment. This is spreading instability and unrest into Bangladesh from Indian politics, and Bangladesh was already experiencing a  bit of churn after what many were considered rigged polls granted a super-majority to the Awami League, the dominant political party in Bangladesh. The Awami League led the liberation fight from Pakistan and have always played an influential role in Bengali politics. But in 2018 there was widespread violence, accusation of vote-rigging and suppression of opposition candidates orchestrated by the Awami League.

Both Bangladesh and India also lie in the intersection of the demographic and economic factors I’ve described throughout these forecasts. The Bengali economy has been on fire, growing at one of the world’s fastest rates. Which isn’t a bad thing, but even a slip in that kind of growth, especially in a developing economy, can create the expectations gap where performance (though still good) fails to meet an ever-rising expectation of continuing improvement. India once included as one of the two “Asian Tiger Economies” (alongside China) has failed to match China’s stronger growth record.

If it feels like I’m spending a bit of time on these two particular countries in what is supposed to be a world-wide forecast it’s that, combining their populations, accounts for 20% of the world population. There is no comparable precedent I can think of to anticipate what would happen if mass civil protests fall into mass-instability in populations that size. It’s just not something that’s had to ever be accounted for.

To round out this forecast I specifically mentioned that I don’t think Russia or China will see mass civil protests. With Russia, the demographic factors are just not there. Despite widespread unhappiness with Putin, there’s just not enough of the fighting-age-men population (I think) to lead to a demographic cause of instability. A contingency that may see instability in Russia however is from a system-shock, like the unexpected death of Putin or falling out of the elite faction brokers who hold power. That kind of event would lead to a necessary reordering of the political dynamic, and that would open up windows of opportunity for popular movements to align with elite power blocks or try to break them apart with mass-unrest. We saw a similar dynamic at play in the collapse of the Soviet Union, so it’s not unprecedented. But absent some move like that, I see continuing repression, assassination, intimidation and harassment by the Putin regime as keeping protest movements from gaining mass power.

China is a bit trickier. Contrary to outside perception – the country is in a constant state of protest. But it’s all “within the system” along approved channels of the communist party.  This includes petitioning, a long-standing tradition of bringing rural grievances into the center of the country, where one can appeal against the corruption or poor decision making of local officers.  There is also an enormous anti-corruption movement which seeks to identify, target, and publicize government officials who act corruptly. This movement however is often frequently used as a power dynamic between competing factions within the party.  This constant churn of “in-system” protest in some ways acts as a safety valve to greater or larger mass mobilizations.

This is necessary because of any country on earth, China has the most to risk from a “failure to meet rising expectations” dilemma. After a decade or two of growing at +7% China will fall beneath 6% growth in 2020. This can be confusing, because anywhere else in the world that’s stellar growth. But after lifting 800million people out of poverty and creating a middle-class, virtually from nothing, in the last 20 years – those expectations of continuing ‘good times’ are running red-hot in China.  And it’s the economic boom, many would argue, that is one of two key reasons the communists stay in power.

The other key reason is the massive state-suppression apparatus the communist party has put in place, the most diverse and sophisticated in the world. These methods range from mass-incarceration, ethnic-cleansing and genocide of the Uighur population in it’s west to “social credit” scoring and legions of disinformation propogandists and cyberhackers. Identifying and suppressing dissent not just within China, but increasingly by external sources. (If this post goes down I’m looking at you Xi!) But the Chinese people are just as adaptive at playing the long game in adapting and working around these systems.

So as long as economic growth remains high, I think the contagion risk is low. If there is mass-instability and civil unrest in China, my forecast is that it doesn’t arrive via Hong Kong. This may not make sense because after all the Hong Kong protests are all about democracy, and greater electoral freedom. But Hong Kong is so small to greater China and the concerns of the average Chinese that I just don’t see it likely. I think instead if there are to be mass-protests or instability it’s going to arise from an entirely domestic, corruption or incompetence-of-government based grievance. Land reclamations are a constant example of this in the rural areas. And as China’s economy slows they’re going to have to navigate a more nuanced policy agenda where they just can’t buy their way out of everything. That’s going to lead to a bone headed policy decision which sparks protest, setting up the scenario of the Dictator’s Dilemma I’ve written about before.