TLDRUpFront: After a brutal November repression of protesters in the new “Young Street” in Iran left a 1,000 dead and over 25,000 wounded; December was a quieter month for the regime in Tehran. The 40th day mourning rites for the November deaths, falling on December 25th and 26th, were preemptively disrupted by security forces which attacked the cemeteries and arrested mourners. And the downing of Ukrainian Flight 752 seems to have reinvigorated the Young Street protests, and even broadened them, in a way that was hard to imagine even two weeks ago. 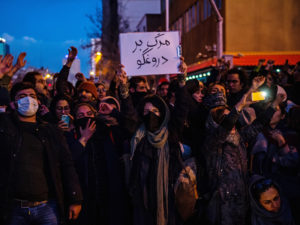 The Young Street returns as regime admits it mistakenly shot down Flt 752.

The student protests had always attacked official incompetence, corruption, and lies. In the downing of the Flight 752, and denial of responsibility for days, all three of those have been crystallized in a single act that serves as a rallying point. Many government officials and clerics loyal to the regimes repeated the denials, and it was the Iranian Revolutionary Guard, the Guardians to the Ayatollah ‘Philosopher Kings’ that made the errors that led to the shooting.

And it’s not limited to students of the “Young Street” this time. Hard-line conservatives were already opportunistically calling for resignation from the more moderate Rouhani Presidency. But they are now being joined by traditionally centrist voices in Iran calling for the President to resign. Newscasters who stayed loyal to the regime even during the November protests are resigning and leaving their stations, claiming that the lies they were told by officials they rebroadcast on air have cost them their credibility.

This broader population, including the students, are calling for resignations deeper in the power structure than the Presidential office – stretching into the normally off-limits Guardian Council and Revolutionary Guard. The Council is a clerical body that acts like an aggressive Supreme Court, House of Lords, and Electoral body combined: invalidating any laws, policies, or even candidates who seek to sand for election that aren’t sufficiently Khomeinist. Their loyalty is to the Ayatollah and not to the people of Iran. Outside of the Ayatollah and key factional leaders (such as Soleimani), the Council holds the most power. And the Revolutionary Guard has traditionally presented itself as above or outside of politics and the elite inheritors of Iran’s revolutionary spirit. Calling for resignation of commanding generals in the Guard would be like Americans calling for George Washington to step down.

These demands for changes at the true center of power may spark a Dictator’s Dilemma (see source in first comment thread.) Give into demands which weakens the regime by admitting a vital-lie at the heart of the power construct and risk that power base. Or deny the demands and use violent suppression against the protests, which risks contagion of instability and broadening resistance to include new, more expansive demands and risks that power base.

The ultimate strategy; whether in Go, political activism, or conflict is not to stay one-move ahead of your opponent. But to maneuver your opponent into terrain or conditions within which there are no good moves left. Where the very system forces that sustain them flip and turn against them; from virtuous to vicious. Tight loyalty and mutual self-interests between the Revolutionary Guard and the Guardian Council is what keeps both halves afloat. But now tied at the hip they risk sinking together.