TLDRUpFront: The first of a four-part series as the United States, and the world, begins tipping-over from COVID-19. The next ten days are going to be hairy. This InfoMullet tries to prepare the mental model of readers for what’s to come by making several forecasts of what happens between now and March 31st, and what we can do to mentally prepare and organize for what comes after. 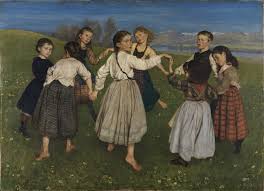 FullContextInTheBack: Earlier in the week on a Facebook Live video I made several forecasts that were a way of setting objective markers. These were mental tests for myself based on the 3/16 WHO Daily SitRep data I had charted on 3/17 and published.  Such as whether or not we hit 12,500 confirmed cases on Thursday or whether the growth rate declined. We hit 12.5K cases on Thursday and the growth rate remains steady at 20-30%.

These tests validate a scenario indicating containment has failed and the United States, and indeed most of the world, is beginning to tip into uncharted territory with COVID-19. Corresponding with other system scientists, or reading their latest publications, this seems to be a growing consensus that we are now in worst-case forecasts for what we thought, even a few weeks ago, with a lot more downside risk than upside in the next few weeks.

What’s About to Happen in the United States

Over the next 10 days, through March 31st, the American public is going to begin receiving exposure to news they are not prepared for. I am using the United States as a proxy here though the news will be similar in countries all over the world.

These are “psychological threshold” numbers because although the human brain can’t process large numbers over 10,000 without training, it still handles “round markers” like 20, 50, and 100.

These are just the confirmed cases. Based on a formulation derived from research by complexity scientists I have estimated that the current actual infected persons in the US is somewhere between 350,000 conservatively to 1.5M aggressive estimate. I will be posting charts and visualizations of this below as I have time so check back if they aren’t there yet. (1)

Parts of the US Healthcare System will Collapse

These numbers are going to push parts of the US healthcare system into collapse in certain locations just like it did in Italy. Most likely to suffer under these conditions at first are those with the largest and fastest growing outbreaks: New York City, Seattle, and parts or California. The dire images and news coming out of Italy last week will now be coming out of the United States, even as early as this weekend. This will not be a “city-dweller” or “Red State vs. Blue State” problem. I imagine several rural towns will go under as well, and the images from there will confirm that COVID19 is a true bipartisan virus.

The Number of Deaths and Death Rate will Rise

The death rate, currently a low percentage will execute a “fish-hook” similar to Spain below and begin climbing. As the chart shows we don’t know the upper limit now but are seeing rates as high as 5-9% in countries that have failed to #FlattenTheCurve. 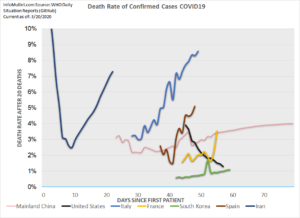 Part of this is that there’s been a misperception that COVID19 “just effects the old.” While it’s true the most severe consequences skew to the elderly, it doesn’t mean young adults are immune. According to a CDC report those aged 24-55 made up 40% of hospitalizations to date in the United States.(4) A hospitalization is a hospitalization at any age, and as ICU beds, ventilators and access to trained physicians dries up in areas experiencing collapse younger adults will increasingly contribute to the death rates.

And the risk isn’t just hospitalization. We now have a better understanding of death rates at all ages from several countries where studies have been conducted. The chart below indicates risk of death ranging from 4/10th’s of a %  in 30-39 year olds to as high as 1.2%  in 50-59 year olds in Italy where the hospital system has struggled. (5)

Move to Mobilization & Lock Down

As I write this we have three states under lock-down: California, New York, and Illinois. That’s over ~70M people. Texas is considering similar measures. Regardless of what the President says I expect over the weekend and early next week, as the risk of healthcare collapse becomes apparent, more states will follow suit. By this time next week up to half the country may be under some form of restricted movement order. We will abandon the voluntary fire break model and move to a Mobilization & Lock Down model similar to Europe.

Federal and State Agencies will Strain to Continue Delivery of Services

Federal and State agencies are going to be fighting on two fronts: public delivery of services under emergency conditions while also managing internal outbreaks in their own agencies. This will put enormous strain from the tip-to-the-tail of the spear.

And Then It Gets Serious

The above forecasts outline what will happen in the coming week to 10 days as we approach the end of March. It does not represent the worst it can get. From a timing perspective my current forecast is that we will be under restrictive movement orders for at least 20-30 days after this next week. It could easily stretch into several months under various conditions.  Such a sustained level of restrictive movement orders will have unanticipated consequences across healthcare, the economy, and communities. I will use the next three posts both to document events as they unfold and examine what’s likely to come after.

If the above were just happening to the United States, it would be bad enough. But unlike past crises such as 9/11, the Iraq War, the Financial Collapse of 2009 which were to greater or lesser degrees localized phenomena to certain countries, the developed world or other to specific geographies or circumstances, COVID-19 is going to hit the world at the same time all at once. We’ve seen outbreaks now at all latitudes, temperature zones and specific local circumstances, on every continent.

Where we’re not seeing reporting in certain developing countries that’s not because they are immune. It’s because they can’t afford the means or don’t have the infrastructure for testing regimes.  At-risk healthcare systems in developing countries are more likely to collapse earlier, stay collapsed longer, and lead to higher death rates in these areas – even if it’s not well reported.

COVID-19 however is not just a health care catastrophe. As countries move into Mobilization & Lock Down they are stopping large portions of their consumer economy which will have untold ripple effects. Goldman Sachs is predicting a Q2 GDP for the United States of -24% (2), while other estimates range from -8% to -15%. (3)

Bottom line – the world has not seen an urgent global challenge like this since World War II. There’s been nothing to compare to it in most our lived experiences. My fear today is that all the crises I mentioned above: 9/11, Iraq War, Financial Collapse of 2008-9, Syria Civil War etc.; everything that’s happened leading up to the next ten days is going to be a 1-2 line footnote in the chapter of 21st Century history that begins with COVID-19.

And if I’m wrong I’ll promise I’ll wear a chicken suit live on the internet and sing glad tidings for being wrong. I don’t like making these forecasts, but I feel it’s important for people to begin preparing.

What Can We Do?

This is going to be a hard week. How can we cope and organize ourselves to best respond? Below is a quick take written in ~30minutes. It’s not the end all and be all but a way to mentally think through the coming week and how you can engage these steps beginning today.

This is going to be an experience not unlike being a desk-bound analyst in a war zone, something I have some familiarity with. Except the dirty little secret for most who deployed overseas is we weren’t actually in the war itself. Not the part that people imagine of combat and firefights. The vast majority of personnel are behind base perimeters doing supporting work to help the ones who go outside the wire. When I was deployed I’d see the front-line soldiers coming and going every day. Armed to the teeth facing IED’s, ambushes, snipers and rollovers outside. But inside? We were rocking that Fobbit lifestyle that mixed the relative-in-comparison comfort of being physically safe with 82hour work weeks and someone lobbing rockets at us just enough times we developed a crush on the lady-voice “Rocket Attack” alarms.

It begins to combine an intense feeling of disassociation while also constantly being on edge. That alternatively every detail mattered and then moments later nothing mattered. Body stuck somewhere between fight/flight/freeze, boredom while your mind tries to process it all, do it all, and solve the war. Oscillating between panic and boredom, overwhelmed by the suck of conditions we’d rather not be in but painfully aware there’s always someone who has it way worse than you out there.

The problem is no one can be supporting if they crack like an egg or burn themselves out. This means before you can support the big cause you need to tend to your own needs. Here’s a short list of what worked for me when overseas:

*Protips on the screaming part though, warn your neighbors so you don’t scare them and be sure to engage your “box” from the diaphragm, so you don’t hurt your throat. I did this last night and I felt immediately better, but I’m an amateur and was worried I’d have the cops called on me and lose my voice.

What to do now that you’re ‘coped’?

So, you’ve got your head in the game and are building your routines to sustain yourself. What do you do?

Right now, it’s essential we do as much as we can to slow down the contagion to mitigate impacts on the healthcare system. This is beyond washing hands and not touching faces. It’s also limiting essential travel for the next 20-30 days.

But if these forecasts are even half right this is going to be a problem a lot more than 20-30days and its back to normal.