TLDRUPFront: Saturday’s domestic terror attack were perpetrated by what appears to be a left-wing extremist who is an active duty Air Force Sergeant. Carrillo is under arrest and tied at least two deaths and three injuries of local and federal officers across two separate attacks. Statements by Carrillo, caught on video, and social media activity prior to the attack indicate motivation by the murder of George Floyd, police brutality, and resistance to fascism. However, there is no evidence yet of ties to formal or informal left-wing extremist groups other than shared beliefs and Carrillo appears to be a lone-wolf terrorist.

This case serves as a useful reminder on the importance of the what has been called Clancy’s Razor, “be very careful of initial sourcing and ‘hot-takes’ in the first 72hours after a violent event such as a mass-shooting or terrorism.”

On initial details of the attack given the location in the rural Northern California, Air Force background of the suspect my first thought was “right-wing extremism” from an anti-government or white-supremacy ideology. That’s statistically probably, right-wing extremism and salafi-takfirism are the overwhelming sources of violent domestic terror in the US over the last twenty years.

But right-wing extremism and salafi-takfirism are not the exclusive causes of violent terror either and left-wing extremist violent terrorism, though isolated, does occur. And although its frequency is declining, the violence those incidents cause is rising. 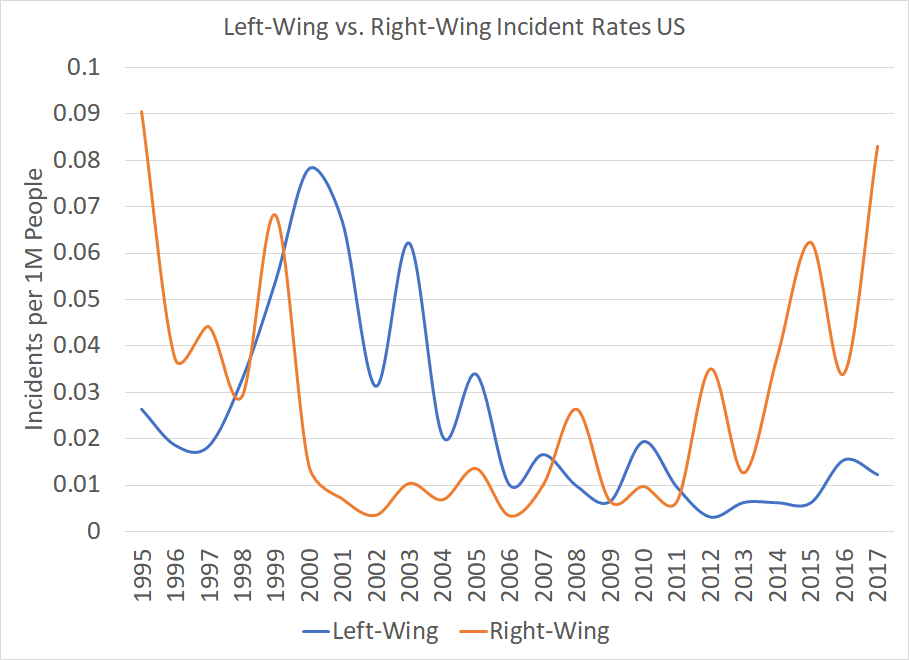 However, even as frequency of incidents declines, the casualty rate per 1M people of left-wing extremism has risen to match that of right-wing terrorism in recent years, as shown in the chart below. [1] 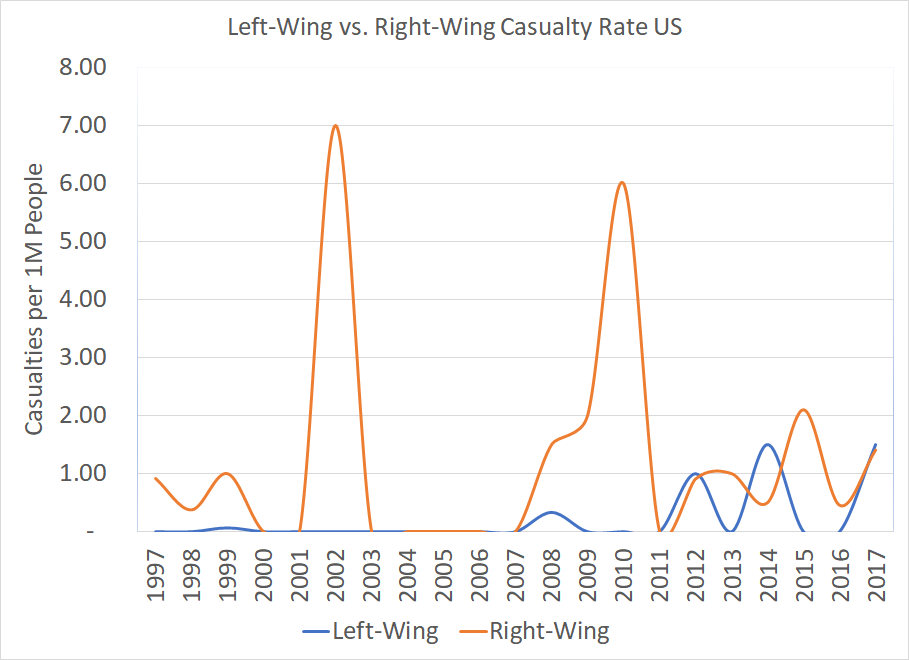 Both charts end at 2017 which is the limit of the data available for the research at the time the analysis was conducted. The source of the terror incidents was the University of Maryland’s START Initiative Global Terrorism Database that were then individually classified by ideological motivation. [2]

Carrillo’s social media activity in the months leading up to the attack indicate a general ideological motivation against police brutality, racism, and resistance to fascism. A triggering event for the attacks appears to have been the murder of George Floyd and subsequent protests, some of which turned into riots. Carrillo blamed police response for triggering the riots. Hist last social media post just minutes before the attack on Saturday is a common image of the Holocaust Museum sign with “the early warning signs of fascism.” [3]

Additionally, as Carrillo was being led from the scene of his capture he made statements at that time, caught on video: “This is what I came here to fight. I’m sick of these (bleeped) police.” He also mentions police use of force. [3]

Saturday’s attack killed one police officer and injured two others through a combination of IED’s and gunfire. Carrillo is also suspected in the May 29th attack outside an Oakland Federal Courthouse that killed one Federal officer and injured another. That attack coincided with Floyd protests and used a similar van and firearms as in the Saturday attack.[4] The ATF is trying to match bullets from the firearms recovered. Carrillo is a military police officer and had received specialized airport security training as well as IED training. Although I had mentioned his wife’s previous suicide in 2018 as something that may spark renewed interest it’s become clear since that Carrillo was on the far side of the country and cleared in her death.