TLDRUPFront: In our ongoing series Revealing MESconduct we review the Broken Staircases Pool. This pool describes the warning signs, challenges, and lessons learned from investigations on reported  Weaponizing misconduct that volunteer organizations may face. In the Broken Staircases Pool are 83 investigated offenses across two alleged perpetrators. 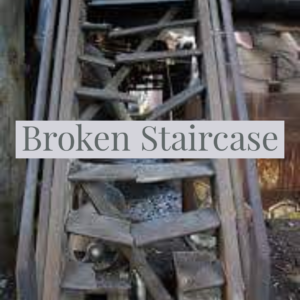 FullContextintheBack: This article is a subsection of Revealing MESconduct Part2: Investigations & Lessons Learned. The series is based on two years of volunteer work investigating accusations of misconduct in a volunteer gaming organization, the MES. Part 1 dealt with balancing the tensions between survivor privacy, community education, and community safety. Part 1 also covers frequently asked questions about where the information came from, whether it is publicly available in other forms, and my motivations in doing this.  Part 2 provides an overview of the 180 investigated offenses across 11 alleged perpetrators. The investigated offenses are segmented into six pools examined in sub-sections like this: Weaponizers, Creaky Stairs, Broken Stairs, Violent Actors, Broken Staircases, Serial Predators. Each pool summarizes the kinds of accusations, warning signs, challenges, outcomes, and lessons learned of those accusations and investigations. The lessons learned in each pool aren’t always limited to that pool and alleged perpetrators may have investigated offenses in more than one pool. Many of them apply across pools. In this article I’m focusing on a single type of reported misconduct: Broken Staircases.

There are 83 investigated offenses in this pool, including three Letters of Counseling, two Formal Warnings, 37 Minor Offenses, 32 Moderate Offenses, 8 Major Offenses, and one  Severe Offense.

Accusations against Broken Staircases in this pool demonstrated prolific behavior in two ways—first, allegations by multiple targets of Broken Stair behaviors occurring over many years. Or in burst events, consisting of a continuous string of accusations of misconduct against multiple targets over a multi-hour period without any significant break in actions. Accusations were for in-person and online misconduct. The investigations uncovered information consistent with the allegations.

One investigation uncovered four warnings from four different national officers over six years on the same alleged misconduct patterns for the accused. There was no evidence that national officers were aware of prior warnings when they wrote theirs or a coordinated effort to enforce the warnings.

One challenge of Broken Staircase investigations is time. One investigation took over six months and produced thousands of pages of documented allegations covering six years of misconduct with a summary report of over 100 pages. This report was only a partial record limited only to the evidence we could obtain at the national level and a limited number of Regional or Domain archives. During the time it took to conduct the investigation and the Board to act, accusations against the Broken Staircase continued to accumulate from different accusers adding to the investigation. Another investigation took seven months despite the misconduct occurring very publicly witnessed by over 15 individuals. The accused even apologized for their actions the next day.

Why so long? Because the accused was a high-ranking member of the organization.

The position and influence of Broken Staircases create more challenges than their length. Investigations uncovered evidence consistent with an accusation that a Broken Staircase received ongoing and active MES officers’ improper support. This support sought to mitigate, undermine, or make investigations go away. In another investigation, the accused used their position to request access to confidential information on a Serial Predator investigation while working on defending their misconduct (see Weaponizer Pool.)

A final challenge common to Broken Staircases – when they leave, they are joined by their supporters who resign in protest. This departure can range from one to several dozen members, including regional, national, or Board level officers. Sometimes the departures are quiet. Other times mass-resignations are accompanied by sustained social media campaigns. These social media campaigns seek to call into question investigation results, harass volunteers and officers, or put pressure on survivors who made accusations.

Beta and Tau are in this pool.

Broken Staircases often begin as “warlords” in broken systems. Warlords rise in dysfunctional organizations where safety rules are lacking and inconsistently applied. Members seek protection and safety with those perceived as strong enough to protect them from other members.  However, a warlord’s protection is contingent on participating in a cult of personality. Failure to show unquestioning loyalty to the warlord can lead to retaliation (see Part 3: Origins & Organizational Risk Factors for more on warlord behavior.)

Warlords in an organization wield tremendous formal and informal power – and it is a perceived power imbalance between them and other members that can lead to misconduct. Often the members who supported a warlord in the past are the same ones resigning protest when a Broken Staircases’ prolific misconduct catches up with them.

When members see warlords gain respect and influence some may seek to emulate the warlord behavior to gain social cachet and power for themselves. When Broken Staircases leave quietly, there is no communicated deterrence that their actions were wrong. The accusations made in investigations of Creaky Stairs and Broken Stairs, and the information obtained in those investigations, sometimes bore close similarity to prior behavior patterns of Broken Staircases.

The power needed to investigate Broken Staircase is the same power that put them there. Investigations on Broken Staircases are more difficult than Broken Stairs. They may be the organization’s leader or within the top ranks and have friends among key staff. Internal conflicts of interest, informal pressure to ‘let this one slide’ and unreasonable requirements of perfect procedural handling complicate investigations. When confronting Broken Staircases, organizations should consider bringing in outside teams, independent investigators, or ‘swap’ with other adjacent organizations in the community to reduce these influences or pressures.

Audacity is not a defense. Hopefully, in 2020, versus 2016, when I started, the possibility that prolific misconduct occurs in plain view without being held accountable isn’t as hard a pill for some to swallow. When accusations arise that sound incredible, be careful of falling into the trap of thinking, “this can’t be so bad – otherwise wouldn’t people complain or leave?” With Broken Staircases, they are leaving. But only a few are telling you.

In keeping with the final general lesson learned in the main article, I am calling upon the MES to do the right thing. Follow its procedures to release limited information found in “Notifications Regarding Officers” of their handbook (see MH2018Q4 p70-74 and 2020 MES HB, p95) and apply it for the alleged perpetrators of the Broken Staircases Pool. This information consists of: