Home  »  Domestic Affairs • InfoMullets   »   InfoMullet: Something Minks in the state of Denmark
Spread the love

InfoMullet is collaborating with Science Decoded to bring a series of articles on COVID19 and vaccine release. To view more of Science Decoded’s content including live-updates, Ask Me Anything videos, and even a few COVID19 related memes check them out on Facebook.

TLDRUpFront: The Danish government has killed several million mink in order to control the spread and mitigate the danger of COVID-19. Several mutations have already been observed in the minks, and one that might constitute the beginnings of a new “strain” of COVID-19. That threatens the efficacy of a vaccine, and so it is very important to control it. 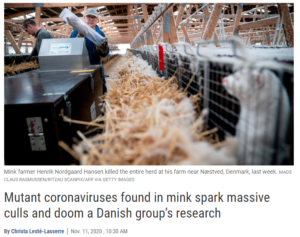 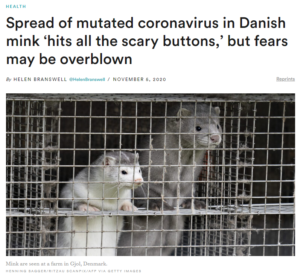 Why do we care about minks getting sick with COVID-19? Absent anything else, more people – or more animals – being sick with a pathogen increases the risk and the damage FROM that pathogen. But, that danger can broadly be split into two buckets:

1) The generalized risk that comes from having more of that pathogen out in the world.
2) The particular risk that is derived from animal reservoirs and how they interact with a viral pathogen.

See, whenever a virus replicates, there is a chance that a copy error will get made and an A will get switched to a G or a T to an A or whatever. There are error-correction mechanisms that reduce that rate somewhat, but they never reduce that rate to 0. And, mutations are a bad thing, because they are the engine of evolution and the key to viruses evolving past innate host defenses and thus vaccines. Two examples of viruses with a higher-then-average rate of mutation: HIV and Influenza. Two examples of viruses with a lower-than-average rate of mutation: Rabies and Smallpox. There are two ways to increase the number of mutations happening out in the world, and thus the chance that a virus will get REEEEEALLY lucky and mutate into a new strain that overcomes a host’s innate immune defenses: increase the intrinsic rate of mutation of the virus, or increase the number of times the virus is being replicated.

Animal reservoirs do both of those things. A pandemic control strategy based on “induced herd immunity” does the first of those things. That is why absent many, MANY other reasons – economic effects, human consequences, overwhelming health care infrastructure – those are both bad things to have around or to pursue. 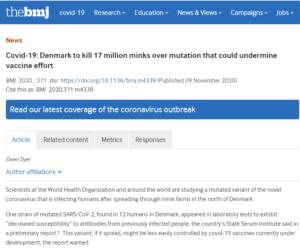 Denmark has a mink population of something like 17 million. If a substantial portion of those mink were to become infected with COVID-19, that is something like – on a likely low-ball estimate – 1,000,000,000,000,000 replication events for COVID-19 per day (-ish. Bear in mind that these back-of-the-napkin calculations are not definitive). Even if the chance of a mutation happening is only 1 in a million, that STILL means that 1 billion mutation events would happen every day. If only 1 out of every million of THOSE events were viable and somehow affected the actual expression or composition of the virus, then that would STILL be a thousand events per day.

When you roll a million-sided die enough times, the chance of it rolling a 1 eventually becomes quite significant.

But, there is also a second element to this. Whenever a virus crosses from one host to another, it generally has to change in order to either infect the new host’s cells (because they usually have subtly different receptors) or to overcome the new host’s defenses (because they usually have subtly different lines of defense). This selective pressure means that the viruses that are not changed in the “right” way do not make the jump, and that therefore the viruses that DO infect the new host are almost by definition a little different than most of the viruses in the original host. It does not CAUSE them to change, but because it weeds out the unchanged ones and then the changed viruses replicate in a new host, it applies heavy selective pressure favoring change. Then, that process happens AGAIN whenever the virus crosses back from the animal into a human host once again. That means that animal reservoirs are an engine of change, because every time that jump is made the virus is almost by definition different than it started, and when those jumps happen independent of one another the virus is reinventing the wheel and thus potentially stumbling into a newer, more dangerous innovation in the process.

That is why controlling those animal reservoirs is important. That is why China killed many thousands of pigs and chickens when Swine or Bird Flu threatened, and that is why Denmark is culling its mink population now. 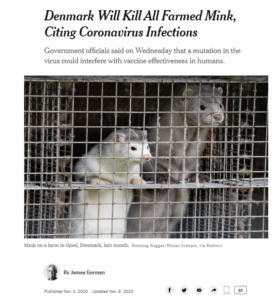 You might be asking yourself, “Denmark has a big mink industry?” I know, I was surprised too. But, the country sells about 14 million mink skins annually, which represents about 40% of the global supply. That is a LOT of mink. When the Danisk government culled the mink population, ultimately around 17 million mink were killed. That is a LOT of mink.

Minks, cats, bats and pangolin are the only four creatures other than humans that have been observed to some degree (or supposed to some degree) to be susceptible to COVID-19 infection. There has been some observation of dogs testing positive for the presence of viral DNA, but further examinations suggest that was only a residual/false positive result from having licked a sick owner and gotten some of their saliva in their mouth/nose.

I mention that because while there are a LOT of mink in Denmark, and it is the largest single producer of mink pelts in the world… it is not the ONLY producer, and the production in Denmark represents less than half of the global production of mink pelts. There are also farms in Ireland, the United States, Sweden, the Netherlands, Spain, France and Italy, ad undoubtedly elsewhere. Some of these places (Ireland) have started to cull their mink herds, while others (The United States) have not.

In November, six different variants of COVID-19 were discovered tied to these farms, one of which seemed less susceptible to being neutralized by convalescent plasma obtained from people who recovered from COVID-19 infection. That – while not definitive in the least – suggested that that “Cluster 5” variants might be resistant to ant-SARS-COV-2 antibodies, and thus be on the way to becoming a new strain of COVID-19. However, it was only detected in a small number of people, and absent an environment with a large number of non-susceptible individuals (such as after a vaccine is introduced, or a country that has “reached herd immunity” through a strategy of letting the virus run rampant), there is not strong selective pressure for that variant to rapidly reproduce and increase in prevalence.

It is at this point the Danish government stepped in. 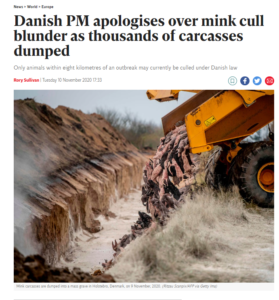 On 09 November 2020, the Danish government announced that it planned to cull its entire mink herd in order to eradicate this viral reservoir and reduce the risk of COVID-19 infection and mutation as a result. A day later on 10 November 2020 – as animals were being killed and buried throughout the country – the Danish Prime Minister amended the order amid backlash to it. He admitted that he lacked the authority to order the culling of all Danish mink, and instead revised the order to apply only to mink that were in reasonably close (<8 km) proximity of an outbreak of COVID-19. After that point he filed new legislation to allow for the expanded cull.

On 19 November 2020, the Irish Department of Agriculture issued a similar order, calling for the culling of 120,000 mink in the country. 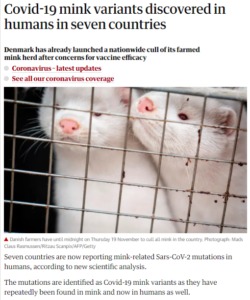 Well so that’s that, right? With all of the mink dead, “Cluster 5” should die out on their own and we can call off Code Mink. Not so fast.

Since then, the various Cluster variants – though I have not been able to confirm “Cluster 5” – have been observed in seven countries. Since the kind of genetic testing that identifies rare variants of SARS-COV-2 is far, FAR less common than the more normal COVID-19 qPCR or COVID-19 antigen-based testing, it is likely that this only represents a small number of the total individuals infected with the “Cluster 5” variants. As we move toward approval of one or several COVID-19 vaccines, we need to be on the lookout for variants like this and do our level best to isolate and eradicate them before they spread to the global community and propagate beyond easy control. It’s not even completely clear that this has not already happened with Cluster 5, but many think it either is or soon will be on its way out due to the same naturally selective forces that led to its evolution in the first place. 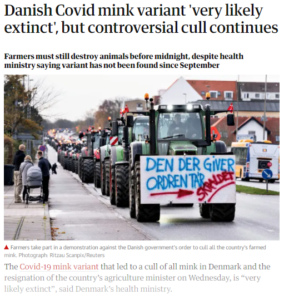 All that said, we need to be careful of animal reservoirs and cognizant of the layered dangers inherent in allowing COVID-19 to propagate. Strategies that rely on its uncontrolled propagation need to be stopped immediately, and more rational, effective public health measures taken to control the disease. Even now, a year behind and with more than fifty seven million people infected with COVID-19, we CAN stop this disease and control this pandemic. With international will, smart action, and the significant deployment of critical public health resources, it is possible. We just need to decide to do it.