TLDRUpFront: Eight years into the Russo-Ukrainian War an escalation to full-spectrum conventional operations appears likely. Russia’s strategic goal in the region is to keep Belarus, Ukraine, and Georgia from ever being part of an economic or military bloc that can threaten it. Military buildup on Ukraine’s borders now provides six potential scenarios to achieve this strategic goal in Ukraine. The most likely scenario is a diplomatic face-saving with concessions or absent that a limited objective invasion into the already destabilized separatist region or attempting seizing a land strip across the south of Ukraine to isolate it from the Black Sea and link Russia, Crimea, and the separatist Transdniestria region in Moldova. 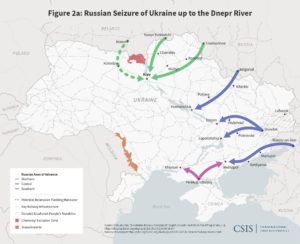 With rumors of a potential Russian invasion of Ukraine is “imminent” over the next few days, this post seeks to briefly outline six potential scenarios that may play out.

As background Russia’s strategic goals are, at minimum, to establish itself as a regional hegemon with an unchallenged sphere of influence over near neighbors of Ukraine, Belarus, and Georgia. A more ambitious goal would be to fully integrate these territories into the Russian Federation, re-establishing the boundaries of the Russian empire both under the Tsars and the Soviet Union. This strategy is mutually exclusive with any of the three, especially Ukraine, creating more formal economic or military ties into western Europe. This strategy is not new. In previous posts, we have provided a background of Ukrainian internal politics as influenced by Russian and US moves and counter-move going over the last twenty years. And we’re also releasing our coverage of the start of the Russo-Ukrainian war in 2014 as Euromaidan escalated into a regime collapse and Russian annexation of Crimea followed by supporting irregular conflict in Donetsk.

This long-standing strategic context has led to the current crisis. Beginning in November Russian military forces began building up along three sides of Ukraine. Currently, a majority of their ground forces, elite forces, and significant air and naval assets are placed in positions that give Russia a variety of military options to achieve its strategy in Ukraine.

Below are six scenarios of increasing military complexity and severity [1].

In scenarios 2-5 above, Russia has three possible invasion routes from North, Central and South. The fastest land advances of modern warfare clock about 20/miles/day. But given winter conditions, determined resistance, and logistical concerns 5-10/miles/day are more reasonable if the advance succeeds (see force analysis below.)  Using Kiev as a target point the various invasion routes we can calculate approximate invasion timelines.

That’s of course if everything goes to plan. Which warfare rarely does. Given the time of operations and the lack of a hard freeze this year’s milder Ukrainian winter, some analysts predict Russia’s advance may be slowed by mud either on the front or back end of an invasion timeline. After digging a bit deeper that doesn’t appear as clear cut as hoped. Russia has significant operational experience moving its forces in its near space and is familiar with the challenges of spring muds.  More likely, logistical FUBAR’s or simple morale problems might bedevil a Russian military that has already shown itself to be more bark than bite in recent regional proxy conflicts.

In Scenario 6, a full-scale invasion seeking to take over the entire country would of course take longer. Worse for Russia, it is unlikely that immediate resistance fighting in its backfield would slow forward momentum past a point as troops were tied up in garrison and counter-insurgency options.

It’s always important to remember an opponent is not some super inhuman foe – and beset by all the same uncertainties, ambiguities, and concerns of failure that the chaos of war creates. And recent Russian military performance in other regional conflicts has been lackluster. Although all of Ukraine is at risk from Russia, all of Russia is at risk for Putin if he gambles his army and it falls apart or gets bogged down into a protracted fight with Ukraine. Also the larger the conventional provocation the greater the risk of escalations by NATO and its allies on behalf of Ukraine. And Putin’s strategic temperament has been to incrementally increase pressure over years rather than play for the big win.

This means the most likely scenarios are the most limited ones Scenarios 1, 2, and 5. A diplomatic resolution with concessions allows face-saving for Putin while still preserving the illusion the Russian military won’t fall apart. By the same token – limited invasions of bounded strategic areas – the separatist Donetsk region or seizing the southern land strip keeps Russia fighting on a friendlier human terrain, with less frontal exposure. The risk of potential catastrophic blunder from an “all in” approach to Scenarios 3, 4, or 6 keeps some powder fresh.  These might not just be needed for strategic feints or reserves in Ukraine.

If Putin does make a big move into Ukraine and fails over a 6-18 month timeline – he’s going to need those troops back in Russia against what will likely be internal pressures and competition.