TLDRUPFRONT: Russia’s beginning to show its hand on what pretext for invasion, if they choose to, they’ll be using over the next few days. And the cards in the hand signal their choice of scenario: diplomacy or one of five different military actions. 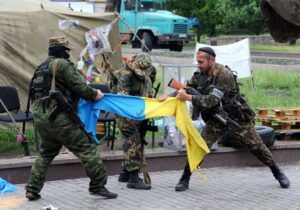 Ukrainian separatists Putin thinks Zelensky should negotiate with ripping up the Ukrainian flag in 2014. Which…bodes…not well.

FullContextInTheBack:
In the last 24hours:
A) Both Ukraine and NATO have seen no evidence that Russian troops are withdrawing from the border as claimed.
B) The Russian Parliament passed a resolution asking President Putin to recognize the independence of Dontesk separatists in eastern Ukraine, also known as the Donbas People’s Republic.
C) President Putin has previously demanded President Zelensky of Ukraine meet with these pro-Russian separatists in negotiation. These separatists are on record as declaring their citizenship as Russian.
D) President Zelensky has asked to meet with Putin directly, but Putin has refused.
E) The largest denial of service (DOS) attack in Ukrainian history began yesterday and continues through today.
What this is heading towards in terms of pretext is: Putin recognizes Dontesk independence and alignment within the Russian Federation. This triggers US, NATO, and Ukrainian reactions. Any act against the Dontesk separatists at that point would serve as casus belli for Russian movement into Dontesk under Scenarios 2 or 5 discussed yesterday. Or the increasing pressure along this front serves as the diplomatic basis for concession seeking under Scenario 1.
Either way Russia’s rationale of “military exercises” expires on February 20th meaning leaving 1/4 of their land power and 75%+ of their special forces capacity on Ukraine’s border becomes harder to justify.
What to watch for:  If President Putin wants to head towards Scenario 1 diplomacy, he’ll keep the Duma Resolution card in his hand as a negotiating tactic. If he means to invade in any of Scenarios 2-6 , he’ll play the card on the table to create conditions on the ground for the pretext to occur.Sources:
(A) Lack of Pullback. https://www.reuters.com/world/europe/russian-pullout-meets-uk-scepticism-ukraine-defence-website-still-hacked-2022-02-16/
https://www.reuters.com/world/europe/no-russian-withdrawal-yet-ukraines-zelenskiy-says-bbc-2022-02-16/
(B) https://www.themoscowtimes.com/2022/02/15/russian-parliament-backs-plan-to-recognize-breakaway-ukrainian-regions-a76381
(C-D) https://www.politico.eu/article/ukrainian-separatists-take-up-russian-passports/amp/(E)https://www.themoscowtimes.com/2022/02/16/ukraine-suffers-largest-denial-of-service-attack-in-its-history-official-says-a76415
Tags:Putin, Russia, Ukraine, Zelensky