TLDRUpFront: Putin has four cards to play on the table creating a rhetorical pretext for invasion. Since the logistics are already in place – all that’s left to do is watch for these four cards. 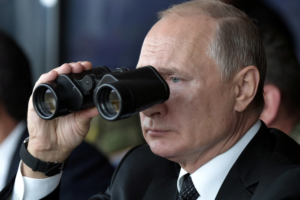 I can see Ukraine from my house!

As we head into the weekend, here’s the rhetorical narrative pretext that seems to be solidifying as the Russian justification for military escalation across one of six scenarios in Ukraine:

A Russian criminal investigation into a mass grave will find proof of genocide by Ukrainian military against Donetsk separatist men, women, and children. Putin will take this investigation result and use it as justification to recognize the independence of two breakaway Russian-speaking Republics in the Donbas region of Ukraine. Meanwhile, he will point out that even as Russia was withdrawing its military forces – Ukraine was stepping up attacks against rebels. These attacks are just the prelude to a massive Ukrainian military strike the aims of which will be nothing less than the genocidal decimation of Russian-speaking separatists. Putin will claim Russian military forces must protect the now independent Russian-speakers of the Republics, Under that pretext, a Russian invasion occurs.

This pretext has little going for it besides rhetoric. The mass graves were located in an area controlled by separatists and even assuming the premise they are “mass graves” (which is unverifiable) there is almost no evidence that those buried there are the result of genocidal actions versus the collateral damage of an eight-year-long war that has already claimed over 10,000 victims, nearly 3,000 of which are civilian[1] & [2].  There is no evidence of Russian military withdrawal away from its positions surrounding Ukraine on three sides. On the contrary, there is evidence of further addition of thousands of additional troops, up to now between 130-170,000 accounting for 60% of all Russian ground forces [3] & [4]. And these forces appear to be moving towards the border from bases to invasion staging areas [5]. In what must have been a Thursday “reversal day”, Putin spokesperson Dmitry Peskov, warned of “huge strike potential from Ukrainian forces” into the separatist regions as if theirs was the military moving towards borders and preparing to strike [6].

As for the ongoing attacks – that’s partly true. Although attacks across the line of control are not uncommon – they have dramatically increased in the last 48hours.  Up to 300 reported artillery strikes in a single day. But claims of Ukrainian attacks on separatists have not been verified, and independent OSCE monitors stationed in the region have recorded hundreds of shelling attacks from the separatist regions into Ukranian areas [7] & [8]. As I write this a car bomb was detonated near the Donbas People’s Republic capital. Although it’s impossible to verify who detonated it – a car bomb that kills no one either speaks of amateur hour or a staged incident to me.

The diplomatic window open through Thursday afternoon seems to have closed. The anticipated Russian response to western European and US demands continues to signal escalation. Released by Tass (using google translate to English so bear with me) it reads in key sections:

Military-technical sounds like the Russian version of formless warfare aka unrestricted warfare aka additive complexity I’ve profiled in the past.

And if that wasn’t obvious enough, the Russian Defense Ministry announced on Friday it would ICBM/Nuclear drills on Saturday the 19th. This drill, normally scheduled for summer would be moved forward, overseen personally by President Putin, and involve “multiple practice launches of intercontinental ballistic missiles and cruise missiles. The air force, units of the southern military district, as well as the Northern and Black Sea fleets, would be involved in the huge nuclear drills.”[10]

Forecasting pinpoint timing is always a little murky in situations. Some suspect Putin will wait until the Olympics end on the 20th, which coincides with the end of the rationale of a military exercise staged in Belarus. Others say the rescheduled military drills tomorrow provide the opportune time. If an invasion is chosen, it may not involve tanks rushing across the line of control. Proceeding with “military-technical measures” may look more ‘military’ with a 24-48hour ballistic missile and artillery bombardment while establishing air superiority with the only ground units crossing anything likely being elite forces. Or it may look more ‘technical’ with increased cyberattacks bringing down key infrastructure and capabilities of Ukrainian government and military

What will be clear however is when each of these four cards is played, in isolation or combination, so that’s what I’m advising people who wish to know to keep an eye out for: :