TLDRUPFront: The first day of full fighting shows that Ukraine is not simply going to collapse in the face of a multi-front Russian invasion. With over 500K+ combat troops between all sides now in the theatre, fierce fighting is occurring for control over airports, bridges, towns, and vital military targets. 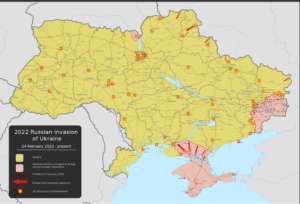 Map depicting the broad invasion fronts of Russia into Ukraine

Russia invaded Ukraine beginning at 0430-0500 local time Feb 24 across many fronts. The Russian general approach seems to be bombardment by rocket, cruise missile, and MLRS with targeted airborne assault on key locations behind their line of control while armored columns push forward from the border. This broad push from three sides seems to have come as a surprise to many Ukrainians who did not believe it would happen and up to 100,000 people are now internally displaced, with most fleeing westward towards Hungary, Poland, or Moldova, all of whom are prepared to receive refugees.

Beginning in the northwest Russian forces have captured Chernobyl. Armored conventional battles are reported in an arc running northwest along the northern border where Russian advances are meeting resistance at Cherniv, Sumy, Hlukov, Kharkiv, and Staroblisk. In the south, Mairpoul near the Donbas Mairpoul seems to be the primary offensive outwards from separatist areas at this time. Finally, Russian forces have taken significant territory in the southwest coming north out of Crimea, where most of the fighting now appears around Kherson.

Kiev came under repeated bombardments and multiple airborne assaults designed to seize airports around the city, including Antonov and Hostomel. This would allow Russia to fly in troops directly rather than fighting to reach Kiev. That is good news for Ukraine. As long as the airports are under contest or threat, Russia cannot fly in troops directly to the capital, bypassing a punishing ground advance. 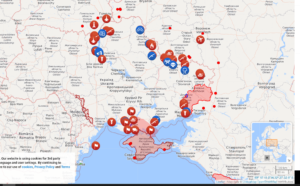 However, the past is a prelude, and the same problems that stymied Russian military performance in Syria, Libya, and the Armenia & Azerbaijan war are already appearing again during the advance. Their air power and armored units are susceptible to countermeasures. Costing Putin’s forces and already a reported 2-6 jets, ~3 helicopters, and 12-25+ armored units depending on which reports you to read. Machine and equipment failures are also being noted– with reports of an AN-26 troop transport cashing inside Russian borders, though it is not clear whether it was leaving or returning and whether or not it had a full complement of troops.

It appears right now that the immediate operational goal was, as expected, to neutralize counter-air batteries and radars, ground the Ukrainian air force, and prepare conditions across the country for rapid ground advances. The targets appear to be Kiev and a broad advance towards the Dneper and take ground in the south connecting Crimea. There does not appear to be significant advancement from the DNR or LNR lines of control forward to the claimed territorial boundaries in the Donbas. However, the Kiev and northern attacks may be opportunistic – seeing if they can catch President Zelensky’s troops off guard or part of a so-called “decapitation strike” to collapse the regime. At least as of tonight, that does not appear to be working. Whether Russia continues to try and move towards Kiev and take these significant population centers in the north or holds while gains are made in the south will give further insight into their ultimate strategic objectives.

However, this is all very early. It is nighttime now, and the air campaign will probably ramp up tonight as Ukranian defenses have diminished. Moreover, we have not seen the full play deck of Putin. Under “Grozny Rules,” President Putin in the past has shown a willingness to engage in the unrestricted bombing on civilian population centers – leveling dense urban centers with vacuum bombs that can level multiple story buildings. He used this in Chechnya first against Grozny and in Syria in Homs and Aleppo to crush resistance. So far, we do not see signs of that, fortunately.

Casualties are preliminary, with several dozen killed and several hundred wounded on both sides, but just looking at the extent of the fighting and the nature of the attack, expect this to double or triple as casualty lists continue to come in.

I am using many sources to track this but the two main ones are the 2022 Russian Invasion of Ukraine Wikipedia site and LiveAuMap, which provided the two images. The former has more context but less detail. The latter has more detail with geo-tagged reports linking to sources and video but is buggy. For a list of other sources, and to join our ongoing discussion check out our Facebook Mulleteers page at: https://www.facebook.com/groups/310201141034283

More updates as they come. Take all this information as notional and illustrative as accurate as I could write it at 5:43EST.