TLDRUpFront: Logistics failures halt advance towards capital even as Russia warns Kyiv residents to flee. Grozny Rules for Kharkiv and Chernihiv in the north and continued expansion in the Crimean breakout, surrounding Maripoul.

In the north, the Russian military has deployed Grozny Rules with rocket attacks, cluster munitions, and thermobaric ordinance in Kharkiv(1) and Chernihiv. While these cities are besieged, other forces have moved to encircle the northernmost region around Sumy, making better gains than they have previously. 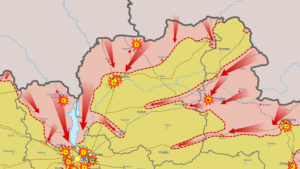 Clowns to the left of me! Jokers to the right!

This is a better position than the massive Chernobyl battle group, which appears stuck in a Russian version of Atlanta’s Snowmaggedon traffic jam. In an indication of serious difficulties in executing effective operations – US Defense Officials reports indicate a 40-mile long convoy of armored vehicles and trucks haven’t moved in 24hours due to lack of fuel parts and “perhaps pausing to reassess tactics (2).” At the same time, however, Russia warned civilians to flee Kyiv under threat of Grozny Rules and targeting of communication infrastructure. Some of that targeting found its mark and rendered the main TV tower in Kyiv inoperable through televisions that were soon back online through other means(3).

In the southern strip, Russia has made more progress towards reaching Scenario #5. Their forces are now patrolling in Kherson proper (4)(5), having crossed the southernmost branch of the Dnieper and encircling Mariupol. Heavy fighting in the Donbas has finally begun to try and push the boundaries of the separatist DNR and LNR back towards the extent of their original claims in 2014. 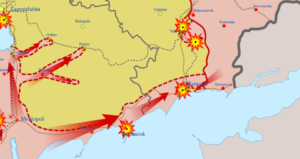 If Maripoul falls only Odessa stands in the way of Putin connecting the southern strip.

Based on multiple POW interviews, we now have a possible additional explanation for Russia’s poor performance(6) –troops weren’t told, let alone prepared, there would be an invasion. Captured enlisted soldiers, NCOs, and even officers report that they were told the deployment was just a training exercise, as Putin tried to claim. Serve these revelations with a healthy dash of salt. Captured prisoners may be reciting the prepared scripts or simply playing innocent. However, if true, it would go a long way to explaining Russian forces’ poor operational security (OPSEC) before the invasion (7). Russian soldiers swiping right on Ukrainian Tinder profiles makes more sense if they’re under the impression they will be going on leave soon.

But additional evidence lends some credence to weak morale in the invasion forces. An analysis of equipment losses for Russia reports that of 357 vehicle losses: 154 were destroyed; 81 were abandoned; 114 captured; and 8 damaged (8). Abandonment, in this case, means the vehicle was undamaged and in operational condition, so that’s unlikely to be a logistic issue such as running out of fuel or spare parts. It’s impossible to know why troops abandoned these military vehicles. It could be an act of desertion or self-interest in the face of determined resistance. I’m not sure how many ambushes led by the Patron Saint of Javelins I’d have to see before reconsidering whether my ride was a safe one. But at 22% of all equipment losses to soldiers simply walking away, that’s a high rate. Combining abandoned and captured these losses account for more than 50% of Russian military losses. Not all of these captures represent a break of morale, of course. But the distinction between “abandoned” and “captured” may sometimes be whether the troops had time to exit and melt away into the countryside.

The Empire Can Still Strike Back

Some balance is prudent before the cart gets ahead of the horse on desertion, abandonment, and poor Russian performance. I’m a bit concerned that memes emphasizing “Zelensky’s big balls” is not preparing people for the reality that all we’ve seen so far are mostly skirmishes. If Russia can shift and effectively deploy large, combined arms forces and expand the use of Grozny Rules, this will get a lot worse.

Partly that’s because cities are difficult to take. Since the late 1990’s large complex urban cities have been besieged a dozen or so times. The low-end estimate can take weeks to pacify, such as the First or Second Battle of Fallujah in Iraq. On the high side, they can take months or years to “conquer,” such as Sarajevo in the Balkans war or Aleppo or Homs in the Syrian War. The capture of Baghdad in the invasion of Iraq was the anomaly to this – we took it relatively easily and even then were facing an insurgency 12months later.

That’s why I still don’t see how Putin successfully occupies over a strategic horizon (of several years) anything other than the Donbas or Southern Strip he’s carving out. Even if Russia reverses its challenges and regains the initiative to seize Kyiv, Kharkiv, Mariupol Odessa, etc., that’s just the starting point for a long protracted and ugly insurgency.

The cost of this failure is going to be enormous. There are already 600,000 Ukrainian refugees and over 1M internally displaced civilians who remain in the country but not their homes. As civilian and military casualties mount, the pressure will be on for stronger military interventions from NATO partners and the EU.

Although an Iraqi army-style morale collapse for Russia would be splendid right now, I’m not sure that’s in the cards. However, if Putin’s miscalculation does cause mass desertion and mutiny in his military, then the example comparing the invasion of Ukraine to the invasion of Iraq would be the wrong one. Instead, President Putin will walk in the footsteps of Tsar Nicholas II, whose disastrous leadership in WWI led to the collapse of the Russian military and his entire Empire. Something an apparatchik might want to whisper in Putin’s ear if he seeks to claim a triumph over taking the southern strip: “memento mori.”