TLDRUpFront: Russia completes Crimea-Donbas land corridor by exploiting humanitarian acts, including ceasefires and evacuation corridors, to prep battlefield conditions for upcoming operations. Though this doesn’t help civilians, it signals prioritization and intent across the battlespace. Increasingly, that strategy aims to encircle Ukrainian forces and cities before swamping them like a rising tide. 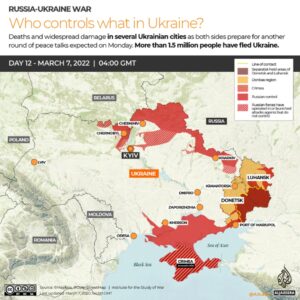 Friday’s update focused on the southern offensive noting Russia was only a few days from capturing Maripoul and achieving a major operational success. Several hours later, Russia announced several evacuation corridors and accompanying ceasefires from Maripoul and nearby Volnovakah, west towards Zaporizhzhya (see green routes on the map below)(1). Over the weekend, these evacuation corridors came and went without much evacuating as additional corridors were announced in Sumy, Iprin, and other areas of heavy fighting with similar poor humanitarian outcomes. 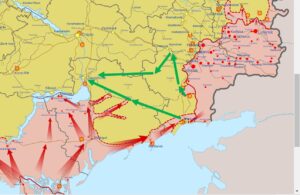 Ceasefires & safety corridors are tools to prep battlefield conditions rather than cease hostilities.

Russia was notorious for manipulating ceasefires and these evacuation corridors in Syria. Often the “fires” aren’t “ceased” along the routes, and Russian troops use the pauses to resupply and advance into better positions. Also, corridors are often located in a path to stymie enemy reinforcement and funnel refugees into a potential future target. When the corridors are open, they create chaotic conditions by surging several hundred thousand IDPs into their chosen location, hoping to overwhelm municipal responses. Often they never open, subjected to shelling to sap morale and squander scarce resources in the besieged city. Finally, these “humanitarian” gestures serve as a timing-delay mechanism to show talks are making “progress”, and avoid the public relations hit of canceling talks, even if nothing on the ground changes. (2)

Even if they serve no humanitarian purpose, these announcements do signal where Russian is prioritizing. For example, the southern front evacuation routes signaled not just Russia’s intent to take Maripoul but create depth along the land bridge they’ve opened by pushing back from the Black Sea coastline up towards the N15 highway that runs west from Donetsk to Zaporizhzhya

The weekend Russia captured the cities of Vasylivka, Tokmak, and Polohy pushing towards this line. If they can secure this, a potential intermediate objective in the east will be Zaporizhzhya as it can be attacked from multiple sides and stage to towards Dnipro north along the Dnieper.

Detailed battalion level maps notionally depicting the location of Russian and Ukrainian forces adds clarity to the operation (3). In most conflict maps, shaded areas depict activity and influences but don’t convey why the forces might be there. But these detailed maps help explain why, for example, a Russian force advanced all the way up towards Voznesensk in the southern front, far north of Mykolaiv. The reason is a Ukrainian force either advancing south or threatening the flank on a Mykolaiv operation. This may be a false clarity. The maps are culled from gathered OSINT, so keep that in mind. 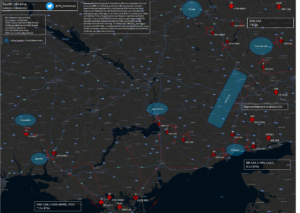 Hammer & Anvil in the East

The same map indicates what the field strategy for Russia in eastern Ukraine might be.

A large Russian force in the LNR and DNR has pinned an equally Ukrainian force along the Donbas Line of Control (LOC). Fighting here, relative to the rest of the country, has either gone unreported or been surprisingly light. This leaves many Russian and Ukrainian forces staring across the LOC at each other in the east.

However, if the southern offensive takes Zaporizhzhya and advances to Dnipro, it risks cutting off the LOC forces, which can’t just turn and retreat easily, given they face a large enemy. Although the logistics capability of Russia is rickety under current conditions, such an encirclement would put the LOC Ukrainian forces into a hammer and anvil between two sides. Even the suspicion of such a condition might force LOC Ukrainian forces to begin retreating to Dnipro to reinforce it, in effect ceding much of the current line of control which is a key operational aim of Russia. 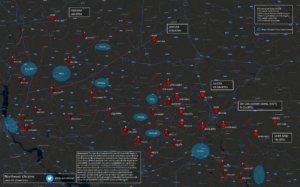 A similarly detailed map(4) shows that Russia continues to advance and maneuver in the northeastern front, encircling Ukrainian forces in Chernihiv, Mena, Konotop, Shostka, Sumy, Ledebyn, Okhtrya, and Kharkiv. Russian forces pin a Ukrainian force as others stream around it. Succeeding in this strategy assumes Russia can maintain resupply and that the mobility of the Ukrainian forces is slower than the encirclement. If the Russian movements are slow or uncoordinated, Ukrainian forces could attempt to defeat in detail by striking at each encircling component and defeating it in order. It’s tricky to pull off as any mistake leaves your force vulnerable to encirclement. With home-field advantage, Ukraine may try to dig in and outlast the Russian supply chain, though that is risky against an army geared towards artillery and fires. 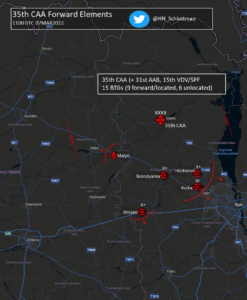 Finally, Chernobyl’s main battle group’s detailed order of battle show movement in its maneuver around Kyiv. Probably too much was made of the “40km convoy” that in reality turned out to be many battalion groups in clusters: some stuck by logistics, others reorganizing and resupplying. Though the similarities to the “Highway of Death” in the first Gulf War are tempting, this formation represents a dense hedgehog making it difficult to attack except on its flanks. And even as the force struggles to enter Kyiv through heavy fighting in the suburbs like Iprin, it is beginning to extend and circle to the city’s west.

What are some mid-game scenarios to conventional conflict as Putin goes all-in?

The last few days feel like a shift from opening to mid-game in the invasion. And there is no sign Russia is going to walk away. According to US Defense updates, some 95% of Russia’s available forces surrounding Ukraine are now across the border and in the country. From an operational standpoint, that means some of these large concentrations represent staging and basing areas in a semi-permanent posture. And although logistic supplies inside the country are proving fodder for attack – no country has yet managed to attack Russian logistic trains entering the conflict from Belarus or Russia. President Putin has gambled somewhere north of 50% of Russia’s entire military ground forces to conventional war, an “all-in” gamble we talked about on the eve of the war. This level of concentration of military superpower or regional hegemon state into a single field of operations probably hasn’t been seen since World War II.

With economic sanctions punishing the Russian economy, fierce Ukrainian resistance, a challenging logistical picture, and-that’s-not-even-discussing-the-insurgency-they’ll-face-if-they-prevail it all begs the question: What is Putin’s end game from here?

Barring significant outbreaks or changes in the above picture, that will focus on the next update.

The context for Mid-Game Scenarios

I recommend West Point’s  Modern War Institute panel for an in-depth review of the Russian invasion to date(5). The Panel includes a Russian military expert, a Ukrainian military expert, and an economics/intl affairs expert. If you’ve been following Twitter, you’ve probably seen either Michael Koffman or Rob Person analysis and tweets, but this is a better format for deeper context.

Format begins with an 8-10 minute overview from each perspective of expertise, then facilitated Q&A from military officers and West Point cadets covering military, economic, and international affairs ramifications of the conflict; both in short, intermediate, and long term.

(1) https://www.pravda.com.ua/eng/news/2022/03/5/7328418/ Note pravda.com is Ukranian Pravda, a Ukrainian news company and not the Soviet/Russian state organ “Pravda” made infamous during the cold war.