TLDRUpFront: Part 3 of 3 of the mid-game assessment forecasts five scenarios for the Russian Ukraine war over the next few weeks through mid-May, rated most likely to least likely. 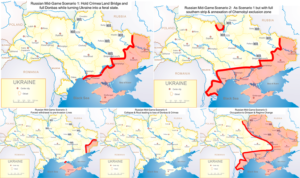 Before the invasion, I presented six scenarios of what a Russian escalation in Ukraine may look to achieve operationally in theatre. As we enter the mid-game of the Russo-Ukrainian war, it’s time to assess new scenarios for what may occur between now and mid-May. I list five scenarios below, each preceded by the key operational assumptions. The scenarios are ranked in descending order from most likely to least likely, so Scenarios 1-3 are all equally likely based on their operational assumptions. Scenarios 4 and 5 are very unlikely, or at least not likely to be achieved by Mid-May.

For other parts of this analyis: 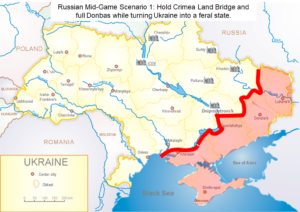 Most likely if Russia’s logistics and combined arms stays as it is.

The operating assumption in this scenario is that Russia can sustain its current mixed results in logistics and combined arms operations. Better than they started – but still struggling to adapt. In this scenario, Russian forces in the north settle into a belt’s strategy around the main cities of Kyiv, Chernihiv, Sumy, Kharkiv and employ a Grozny Rules approach to turn these into feral cities. Over the next few weeks to months, the goal won’t be to effect regime change or conquer these cities. Instead, the goal is to devastate the northern arc of Ukraine into a band of feral cities, effectively turning Ukraine into a “feral state.’

While this occurs in the north, Russia strengthens the land corridor it has taken in the south. In this scenario, the land corridor stretches from Kershon in the west to Rostov-on-Don in the east and as far north as the N15 highway line between Zaporizhzhya and Donetsk. North of that line, Russia will turn into a buffer zone, reducing Dnipro to a feral city to eliminate it as a Ukraine military center. In the east, it will take the full Donbas. On the western front, although Russia is currently operating in and around Mykolaiv – they will not be able to make gains, and thus Kershon becomes the furthest extent.

To achieve this, Russia must take Mariupol Zaporizhzhya and encircle, then destroy the Ukrainian Joint Forces Operation (JFO) guarding the line of control near Donetsk or force it to retreat. The JFO is a large stack of Ukrainian military that has stood across the line of control with the separatists throughout the war. In this scenario, Russia does not seek to occupy the western/northern bank of the Dnieper, using it as a natural barrier. However, between now and then, I expect fighting to continue around Mykolaiv and even extend as far to the northeast as Kryvyi Rhi attempting to cut off Dnipro and Ukrainian resupply by advancing up the H11.

The negotiated settlement arising from this scenario would see Russia offering withdrawal of northern military troops for territorial recognition of the lands in the south. It might not even be a permanent peace agreement. Still, an armistice or ceasefire that preserves what remains of its northern troops and the situation as it stands in the south, having reduced would be the face-saving sufficient for Putin.

Scenario 1 is Russia’s most strategically sustainable outcome, though its endgame is already bleak (see below). The people of Ukraine have proven they are not amenable to Russian occupation. When I build simulations of insurgencies, I use Goode’s force ratios, estimating the number of troops necessary to garrison a population successfully. The ratio is the number of garrisoning troops per 100,000 required. At or above that threshold, the incidence of insurgent attacks and violent resistance decreases. Below that threshold, it increases. Garrison troops don’t have to be heavy infantry – Russia’s OMON and Reserve forces, lighter infantry better equipped for crowd control than front-line combat will work. But the ratio is dynamic, moving up or down depending on the composition of troops between foreign and local actors and the overall level of violence in an area(1). In Donbas, the Russian occupation would be supported by local separatists, and fewer foreign troops are required; the ratios could be as low as 80-200. In cities like Kershon, Mariupol, and Zaporizhzhya where violence is high and Russian or Chechnyan forces are perceived as hostile foreigners, a ratio of between 280-500 troops per 100,000 people will probably be needed (1). One reason Putin is eager to reduce the population is by Grozny Rule’s fatalities or evacuations as he can – the less people in an area the easier it is to occupy and pacify if Russia wants to hold it.

Scenario 2: As Scenario 1 but with full southern strip and annexation of Chernobyl Exclusion Zone 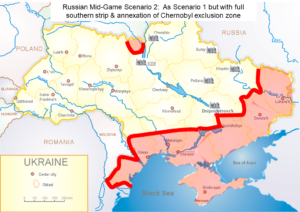 Most likely if Russian logistics and combined arms improves from where it is now.

This scenario is the same as above, but Russia has more success in adapting and improving its logistics and combined arms. Able to utilize its superior quantity of forces more fully, the Russian military will push through Mykolaiv and take Odesa, either by land or combined with an amphibious assault. This effectively secures the entire southern land strip of Ukraine.

Having a stronger hand than in Scenario 1, Russia will seek negotiations to receive the concession of an annexation of the Chernobyl Exclusion Zone for itself or puppet statelet Belarus. The exclusion zone is already depopulated, has more Russian troops per square kilometer on it than just about any place on earth right now, and is a strategic dagger to aim at Kyiv. An annexed exclusion zone allows Russia to continue staging troops and military presence within distance to threaten Kyiv. This creates a situation, not unlike the 38th Parallel DMZ between South Korea or North Korean forces at any time can shell the capital of Seoul.

Scenario 2 represents the balanced mix of most strategic Russian gains in the conflict with the upper limit of occupation costs they could sustain in an intermediate-term. Taking the entire Black Sea coast would deprive it of the now-feral state of Ukraine. It also secures the offshore natural gas deposits control over the strategic east-west pipeline running through the Odesa area southwest. 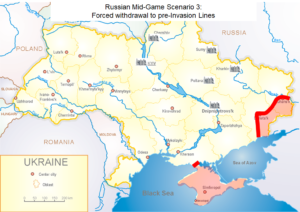 Most likely if Russia’s logistics and combined arms performance degrade back towards early-invasion levels.

However, if Russia’s logistics situation doesn’t improve and conditions begin degrading even further than they are, there is a realistic chance of Ukraine’s military forces pushing Russian units back to the starting lines of the conflict. Dislodging Russia from the Donbas or Crimea would be much harder as the fighting shifts to a human terrain more friendly to Russian and separatist forces. Zelensky has tremendous popular appeal as a wartime President right now, and if he thinks an end to the war is worth returning to starting conditions, he can sell that story. 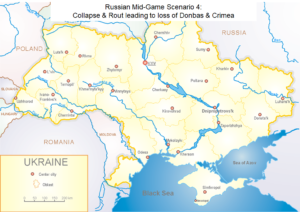 If Russia’s logistics or morale collapse, then there is a scenario where Putin’s forces are routed completely out of the country. This is a very unlikely scenario given both sides’ mutual combat fatigue and the necessary logistics. But suppose President Zelensky takes a nationalist “not one inch” policy to Russian presence in Ukraine. In that case, vengeful troops of Ukraine could spark a general rout and even cross Russian borders. I cannot understate how dangerous this would be not just for Ukraine, Russia, but at that point, all of Europe. A Ukrainian incursion into Russia in the face of military collapse would create a serious risk of escalation to CBRN measures. In this unlikely scenario, it’s safer to push toward the internationally recognized border and stop there. If the Russian army routes and collapses in this regard, it’s hard to imagine Putin’s regime surviving the fallout. 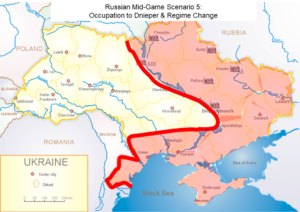 This is the least likely scenario of the five. In this scenario, Russian forces can take the northern band of cities and Kyiv, Poltava, and Dnipro. They also breakthrough Mykolaiv and take Odesa. This would require an order of magnitude improvement in Russian logistics and combined arms and months more effort. But even if the armed forces could obtain this operational goal – I can’t imagine them being able to sustain it long term. In a post-invasion hypothetical of only 5M Ukrainians living east of the Dnieper under Russian occupation, that implies an occupation troop force using Goode’s ratios of several hundred thousand to a million to successfully pacify it.

None of the mid-game scenarios above should be mistaken as indicating Russia is going to come out of this doing well. Any territory they hold will have to be occupied and pacified using the ratios I describe above against what is likely to be a hard-fought active insurgency leveraging stockpiles of Javelins, MANPADs and TB2 drones being cached now.  Whereas the Mujahadeen attracted Islamic fighters from primarily the Middle East to fight against the Soviet Union in Afghanistan, Ukrainian resistance will likewise serve as a pull for western veteran fighters who will continue to flow in. As will arms, equipment, and material. This will meet up with a population already seeded with combat experience and plenty of personal motivation to never accede to Russian occupation given the violence of the war so far.  Any hypothetical post-invasion Russian occupation troops remaining in Ukraine will be like the bikers in a Bronx Tale being told coldly: “Now you can’t leave.” 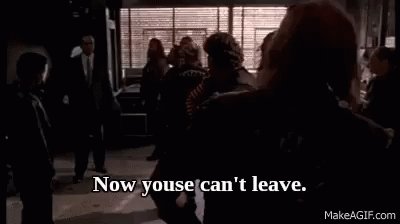 The end-game looks better on the higher level either. Dan Carlin describes conflict as a contest of types of force and counterforce, and I often divide force into three ascending levels: political, economic, and violence. Political is the force of persuasion and influence, economic is harm to property or livelihood, and violence is a threat to life. (Religion is the fourth type of force but not a factor here.)

If we consider Putin’s invasion as a strategy of maximalist violent force, it has been met by the international order with maximalist economic counterforce combined with minimalist violent response in providing only arms and supplies to Ukraine. Ukraine, for its part, is more than happy to return the favor of violent force to Russia.

But I haven’t been able to talk at length on the international picture due to focusing on the immediate battlespace. The combination of sanctions, isolation, and withdrawal of western companies from Russia are formidable – on the scale of past sanctions against Iran or North Korea. But unlike those countries which have had decades of relative or complete isolation to adapt – Russia is still heavily connected via economic, industrial, commercial, and even social networks to the rest of the world. Russia is not a self-reliant economy yet, and the transition to one will be brutal. Furthermore, it’s not clear whom Russia’s partners will be at scale to help them out. China has already signaled, at least publicly, a distancing from Russia even if they won’t go so far as to condemn it. But Chinese banks are not honoring Russian trader letters of credit, and their airline maintenance companies are refusing to service Russian airplanes.

Financially, the ruble has evaporated as a store of value. Even the offshore liquid assets that Putin accumulated as a “war chest”, estimated at around $600B; half of that is frozen in foreign banks, leaving maybe $100-$130BN in gold reserves(2).   I cannot imagine what possible gain Russia will secure under Scenarios 1 or 2 or even 5 to offset this kind of economic punishment.  Even if Ukraine stays out of NATO, Putin has done more in the last three weeks to galvanize the military alliance and accelerate the militarization of the EU than the most hawkish western leader has in generations.