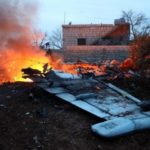 TLDRUpFront: A Russian fighter jet has been shot down in rebel-held northwestern Syria near Idlib. Idlib is south of where Turkey has intervened against the Kurds in Afrin and it is not likely these events are related. Idlib has been under the control of Al-Nusra, an Al-Queda affiliated emerging-state actor for several years. According
Read More
TLDR Upfront: The encirclement of Aleppo by pro-Assad forces has been broken by an unheard of coordinated assault by two rebel coalitions. In response, Iran has sent elite paramilitary units from Iraq and Lebanon into the breach while Russia conducts a sustained air campaign on rebel positions. Once again an “all-in” four-way conflict between five
Read More
TLDR Up Front: The Syrian government remains holding the most gains in the Aleppo battle, but a counter-offensive by the Al-Nusrah front aims to undermine those gains southwest of the city, while ISIS continues to try and contain the Syrian government's advance east of Aleppo to Kuweyenes air force base.
Read More
TLDR Up Front: Although Aleppo has been the Sarajevo of Syria since 2012, it's forming into just such a battle as no less than six distinctly separate major forces converge onto the city from all sides. This is creating a "swirling" effect visible on the map as each group takes, loses and retakes ground. Except
Read More