TLDRUpFront: The spread of mass protests across the country and the seizure of the Justice Ministry in Kiev are just two of several key indicators of escalation towards a full-scale uprising in Ukraine.  The next threshold to watch for is the arrival of the military, and what side they choose. 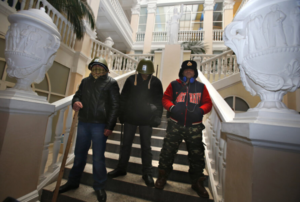 There is a structure to instability. This structure produces visible markers as an escalation of instability from mass protests into insurrections, uprisings, insurgencies, rebellions, revolutions, and even civil war occurs. In my last post on EuroMaidan protests in Ukraine I caught sight of one marker and suggested the next two (emphasis added):

when the protestors charge well-equipped riot police or the police fall back in the face of the protestors, repeatedly and start heading for cover, that’s a bad sign for state control. The state either needs to fall back, surrendering the city center to the protestors, which is what happened in the Egyptian uprising of Tahrir Square – or call in the military

Both of these markers manifested since that post with the addition of a third.
First, protesters seized the Justice Ministry and rejected a power-sharing agreement by the government.[1] The ability to take and hold a governmental building for time is a sign of an insurrection. And to be clear not all insurrections end up as rebellions, revolutions, or civil wars (most don’t.) But a government confident in its position even in the face of insurrection does not offer a power-sharing agreement, and protesters confident in their ability to shake the state tend to reject them. The government is showing a weak hand both physically (loss of the Justice Ministry) and politically (power-sharing) while the protesters showed a strong hand.
A second marker is that there are now reports coming out of protesters taking the fight to the police in Kiev. This is an escalation from the previous protester-police dynamic: where police confront protests in progress and attempt to disperse them but instead find themselves confronted and protesters scatter the police. What happened the other night is a step above that. Protesters sought out a government building police were using to stage. They attacked it with Molotov cocktails while the police were inside[2]. This demonstrates a radicalization of the protesters and willingness to use violence, not just in self-defense, but in offense against instruments of state power. 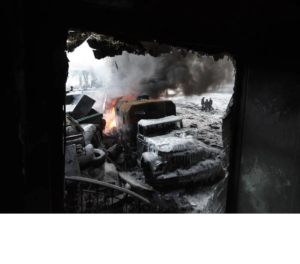 The third marker is that these mass protests are now spreading across Ukraine. A key threshold in how far instability will go is the level of popular acceptance of the grievance or causes advocated by the non-state actors. Consider Paris, during the French Revolution, the broad popular support for instability and violence was often city-centric, focused on Paris itself. Out in the countryside, it was a different matter, and tensions between other population centers in France and Paris led to conflict during the course of the revolution. Compare/contrast that with the protests of 1848 which not only included Paris but spread to capitals and large across the continent.

Back to Ukraine, the protests of EuroMaidan in Kiev have now been taken up by at least 11 other cities in the country. This isn’t just occurring in the western side of the country, which traditionally seeks distance from Russia and alignment with western Europe.  This is the portion of the country heavily aligned with the Orange Revolution of Yushenko and Tymoshenko of 2004 and a desire for better European ties. The Orange Revolution was squashed by a combination of its own incompetence and the return of a Russian-backed authoritarian in Yanukovych, the leader who is facing the ire of protesters today. It was a squashed trade negotiation to enter the EU in 2013 that led to conditions seen in Kiev today. But some of the new protests are occurring in the eastern half of the country, which is more aligned to Russia both culturally and historically.

These three markers, taken in context with the previous threshold indicate:

A) There is a popular upswelling of grievance against the state actor in President Yushenko and this grievance is not confined to the capital city.

B) That popular resistance has morphed from protests to insurrection – seizing government buildings and denying the state actor the ability to function as a government over at least half the country.
C) The protesters are organized and aggressive enough to punch-back, or even out-punch the police.

This leaves a state-actor with little choice but to cede the field or call in the military. And that’s what at least the Justice Minister of President Yanukovych’s administration threatened:

If the protesters do not leave the Justice Ministry building…. I will ask the National Security and Defense Council of Ukraine to impose a state of emergency.[3]

That’s code for calling out the military to confront street violence.

And that brings us to the next marker to watch for. There is no love lost between significant swaths of the armed forces and President Yanukovych’s administration. It’s not entirely clear if the military was called out to confront protesters, whether they would even show up. And even if they did which side they would back. And that’s why this next marker: what does the military do? Is so important.

State governments without the support of the military to confront widespread instability uprisings quickly collapse, at least absent foreign power intervention.  Those we tend to call revolutions. However, state governments backed by a majority of military power can enter into a protracted irregular conflict with the protesters. If the military uses violence to suppress the movements, as we saw in the Rabaa Massacre of 2013 in Egypt[4], that can drive the protest movements underground into insurgencies and clandestine terror networks. However, when armed forces arrive into an environment of instability split on who they will support: that fork usually leads to widespread conflict and ultimately civil wars as was the case in Libya[5] and Syria[6].
Whether that marker materializes is still a question, and how the army will respond if called is a big question mark. Something to watch for.