Home  »  InfoMullets • Russo-Ukrainian War: 2014-2021   »   Historical Mullet: Yanukovych loses control of Kiev in Maidan Revolution.
Spread the love
TLDRUpFront: President Yanukovych loses control of Kiev to Euromaidan protesters as instability spreads throughout the country. Unless the military intervenes there is a real risk of regime collapse. This raises the quesiont of potential mass violence: ethnic cleansing or even civil war in Ukraine. 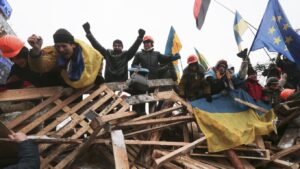 At the barricades of Euromaidan.

FullContextInTheBack
Yanukovych has lost control of Kiev. The police are using live ammunition and snipers – but are simply being overwhelmed by numbers and organization. These protestors are by far the most organized than any I’ve seen in the last few years outside of South Korea in terms of making improvised weapons, improvised defenses and executing military style operations. The map in the accompanying article shows where the lines are in Kiev at the center – but you can also note that others are starting to go up. If a major state building goes up in flames – and is allowed to burn for more than a few hours – it’s a clear sign the state does not even have sufficient power/order/resources to deploy firefighters – we saw this in Egypt just before the coup against the MB and during the uprising itself.
The police, who tried to break up a smaller contained protest have now lost containment and at least a dozen of them were taken, prisoner. Somewhere between 40-80 (maybe more), protestors have been killed today and several hundred wounded. It’s an important psychological tipping point – a shock to the system – when you go from a few dead (which can be explained, even if badly) to dozens. Once that number gets over a hundred in a day it has an effect on the entire system – psychologically important because the choice is now going to become binary: support the protestors, support the state. Word from western (anti-Russian) Ukaine is that about 600 protestors a day are leaving the west on a bus headed to Kiev to serve as reinforcements, which means you have a huge manpower inflow into the city on the side of the protestors and they are going to pick sides. 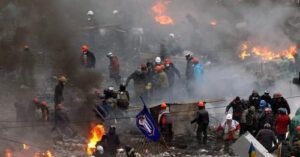 Since the riot police have already lost control. The President’s only option is to call out the military but that’s not a clear-cut option. The chief of the military was sacked yesterday, presumably for disagreeing/refusing to obey an order to crush the protests. About two dozen politicians of Yanukovych’s party have resigned their positions. But – not all politicians and military are going to one side or another. The binary split is the worrying problem, if all moved to against Yanukovych – you’d toss him out and it would resolve. If all stayed unified and went against the protestors, you might have a Tiananmen square or Egyptian style mass-slaughter, at which point resistance would go underground.
But – if politicians AND the military is splitting into two or more sides – it is emblematic of a civil war (what happened in Syria and Libya); a single bright-line of division into which all the complexities, nuances, and subtleties of other considerations get sucked into and rearranged along a simple line. This side – with Yanukovych – that side with the protestors. Usually, it takes decades to create this split – and you can watch it not just in politics – but also in social, academic, and religious organizations. (The split of Baptist and Methodist Churches prior to the Civil War over the issue of slavery was a similar indicator here.) This has probably been brewing since at least before the Orange Revolution, so time for the divisions to manifest has been there. But the higher the body count and bloodshed, the more rapid the disintegration will be into two or more warring factions.

Quite possibly – Korea has a compulsory mandatory service and some of the most violent riots I’ve ever seen. But these are not just draftees – there’s a sizeable contingent of Afghan War Veterans from the Soviet occupation of Afghanistan mixed in there. (2)

What are the odds of pro-Russia east and pro-western west splitting together?

Peacefully? Zero.
I’ve heard some reports that even the ‘pro-Russia’ east are having disturbances against the government. And a significant minority of the protestors are outright fascists – like I said there’s a lot of complexity getting boiled down into the dividing line of: with the protestors or with the President.
Two key questions we don’t know the answer to: To what extent would Russia and/or NATO/EU allow a European country to disintegrate into ethnic cleansing or civil war as the Balkans did in the 1990’s before intervening? And even as they wait, or choose to intervene, what effect does the events in Ukraine have as a form of contagion on other countries in the region?

Is there a risk of ethnic cleansing or genocide?

Well – let’s take a checklist of the Naimark model (3) on conditions necessary for mass *.cleansing:
1) Directed from above by the political elite (check)
2) Supported by the professional class (??)
3) Made possible by “high modernism” of nation-states including modern propaganda and communication, mobilization of mass logistics (??)
And what I add (not in the Naimark model) is a local power disparity that allows the perpetrators to overwhelmingly exert force against the targets of cleansing without immediate fear of reprisal or effective/organized defense.
Although cleansing shares traits with civil wars – the division in the political elite and professional class is less pronounced – more are ‘aligned’ with the perpetrators. I’m not sure that’s the case in Ukraine – look at the pictures and listen to the interviewers and they enjoy broad-based, cross social-class support in both protestors and government. Likewise – at least from current appearances, the police cannot even contain protestors – let alone enact cleansing free of the fear of reprisal. So I’d say – less likely for an unopposed cleansing, and more likely for a Libya/Syria style civil war – though I doubt they would get half as far on their own as either of those did without an intervention from neighbors (which could make it worse).

What are the odds for Civil War?

Because it was in the same paper as the Naimark model – here is my four tests for a civil war, as to distinguish it from other conflicts:
1) The presence of a centrally dividing issue that serves as a binary fault line
2) That this division incorporates numerous other social complexities aligning them on either side of the fault line incorporating smaller fractures into the larger division
3) The splitting of otherwise homogeneous cultural institutions along the fault line
4) That this fault line and its incorporated lesser divisions sustains itself without concrete resolution beyond a single generation.
That last one I really don’t know – how long before the Orange Revolution were these grievances festering.

If Russia intervenes – can the UN, NATO, or EU keep Ukraine from becoming Syria for the next few years?

I just don’t see Russia standing by without getting tempted in. And the ability to deter Russia, absent significant US involvement is limited. Any UN action would get the security council vetoed for anything other than a sternly, yet vaguely worded, cautionary note. I imagine you could find some middle ground on a proclamation, but nothing serious. Ukraine is not a member of NATO. And the EU, absent US support, to deter Russian action is limited. Remember Brits & French are now time-sharing a single aircraft carrier.
Sources:
(1)  https://www.nytimes.com/2014/02/21/world/europe/ukraine.html?_r=0&
(2) https://www.thedailybeast.com/ukraines-military-veterans-protect-kiev-protesters
(3) https://www.hup.harvard.edu/catalog.php?isbn=9780674009943
Tags:Civil War, Euromaidan, Kiev, Yanukovych