Home  »  Historical Mullets • InfoMullets • Russo-Ukrainian War: 2014-2021   »   HistoricalMullet: Maidan Revolution topples Yanukovych Regime
Spread the love
TLDRUpFront: After bloody street battles attempts to suppress the Maidan Revolution with the military have failed – leading to the collapse of the regime, freeing of political prisoners, and growing instability across the country. 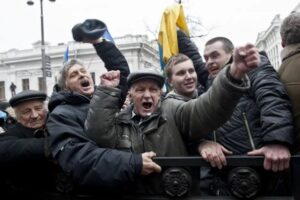 In an emergency session absent the ruling party MP’s, opposition parties passed several key measures by unanimous or near-unanimous votes.  This includes the restoration of the 2004 Constitution, release of Prime Minister Yulia Tymoshenko from the prisoner, and removal President Yanukovych from office with new elections scheduled in May.

We’ll know by tomorrow morning – the end of the weekend at the latest – if the Kiev deal reached today will hold. It ‘seems’ to be a good deal. A democratically elected Parliament overwhelmingly votes to strip the powers of the President, including members of his own party, sack the Interior Minister in charge of the riot police and roll back the Constitution to the Orange Revolution.

In the immediate future – Parliaments attempts to restore peace and effect regime change will be judged by the Maidan Revolutionaries who now control the city. If you’ve been standing on a barricade for months amidst burning tires and 70+ of your fellows were just killed yesterday and several hundred wounded, how good a deal this relatively peaceful transfer of power will be looks radically different.
At the barricades, opposition politicians are being shouted down by leaders of street groups who have promised to take up arms and continue violence if the President doesn’t step down immediately. If the State has indeed lost control Kiev, it may also be that the opposition has lost control of the street. According to WaPo, outside the jeering, the protesters occupying governmental buildings are showing remarkable discipline. The 31st Hundred – one of the militant groups – is the occupying unit, telling protestors to keep off the grass etc. But there are reports of documents being destroyed though it’s not clear if that is intentional or not. Museum officials are trying to get inside the Presidential compound to catalog suspected stolen and/or ‘appropriated’ works of art by Yanukovych.

Avoiding Civil War – but was this a Coup?

The good news with Yanukovych’s removal is it seems to avert all-out civil war. It appears Ukraine’s Parliament took the step I mentioned earlier in the week that would move it away from a rapid escalation into civil war: ” The binary split is the worrying problem if all moved to against Yanukovych – you’d toss him out and it would resolve.” That appears to have happened, but certainly under questionable legality. The binary division is no longer Protestors v. State, but State v. Yanukovych – which is an important distinction, though it’s all still highly fluid.
This is in part because Yanukovych’s removal did not follow normal impeachment procedures, instead using his flight out of the capital in a time of crisis as justification. These irregularities may come back to haunt the Maidan Revolution if Yanukovych and the Party of Ten Regions sets up a shadow government in Kharkiv. Some are already claiming the Maidan Revolution is not a legislative act – but a coup.

Coups can be tricky to call as they are not well defined. But normally a small body with vested legal authority such as military units, police, or departments of the government exceeds their legal authority to remove an official from power. General Sisi’s use of the Egyptian Army to remove President Morsi from power in Egypt and then crush the Muslim Brotherhood is a textbook coup. And though this is not the same as that, one could still call it a coup for failure to follow Constitutional procedures. But even though the vote had a less-than-legal flavor, it was approved by an overwhelming amount of democratically elected representatives – including many members of Yanukovych’s party. Though there remains a question of whether the vote was held by these MPs under threat of force from protestors (implicit or explicit).

Coup or not, the bad news of this move is that as Ukraine shifts away from the potential civil war they are now shifting into a potential insurgency out of the Russian-speaking east & south-east (see below.) If Yanukovych gets wise and just leaves the country and the protestors work overtime to be inclusive of those they have just tossed, that may be avoided.

A procedural irregularity and insurgency may be the least of concerns of the new government of Ukraine. Russia – who had helped orchestrate parts of the accords to grant blanket amnesty and free political prisoners wanted to keep Yanukovych in power during a transition. And they are not happy. Notably, Russian officials have not yet signed the accords they helped negotiate and after the vote to oust the President a Russian diplomat said Parliament’s actions “posed a direct threat to Ukraine’s sovereignty and constitutional order”.  Although full-scale military invasion by Russia is not in the cards –  they can exert extreme economic pressure on Ukraine and information influences. 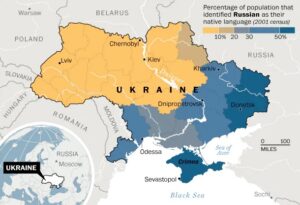 One area where Russia concern is felt most keenly is in Ukraine. The euphoria of the Maidan Revolution in Kiev is not shared here. Protestors trying to show support for the Maidan Revolution are being beaten and called “fascists.”  This reflects deep tensions in the country where the eastern half, with more Russian-speakers than Ukranian; tends to favor alignment with Russia more than the western half of the country, where the majority speaks Ukrainian. The “fascist” and “communist” labels are invectives hurled across this ethnographic line. There is a “kernel of truth” aspect to these insults. Ukrainian history in WWII is complicated including both collaboration with, and resistance to, Nazis. To the Russian-speaking people in the east, this remains seen as a betrayal of the “Great War” waged by Soviet communists.  These historical roots carry forward to today, as some of those violent street groups on the barricades of EuroMaidan are linked to ultra-nationalist movements that if one squints, have fascist elements. And even though they might not be the majority, some of their leaders look set to take on increased roles if the government fully collapses. But more generally, accusations of fascist and communist have become a caricature proxy for western vs. eastern interests in Ukraine.  Less about historical accuracy and more about identification of friend or foe.