Home  »  Historical Mullets • InfoMullets • Russo-Ukrainian War: 2014-2021   »   Historical Mullet: From Arab Spring to Maidan Revolution to…Caracas Venezuela?
Spread the love
TLDRUpFront:Tactics pioneered in the Arab Spring transplanted to Kiev are now showing up in Caracas. And the ‘civil revolution’ in Ukraine is starting to struggle as moderates and militants split and concerns of fascism within the revolutionary movement grow and may risk Russian intervention. 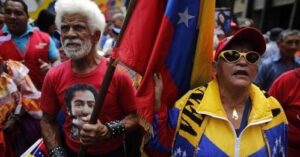 FullContextInTheBack:  Connected by the internet and social media platforms, protest movements around the world are learning and evolving occupation style protests first seen in Arab. I’ve been covering on EuroMaidan in Kiev, but now in the capital city of Venezuela, Caracas, we can check the list with recent protests:
1. Pick a minor issue and seize the center of a major city (check)
2. Set up barricades and an encampment (check)
3. Get the police early on to overreact with violence drawing in protestors (check)
4. Metastasize the movement from the single issue to cross-cutting broad-based discontent at the government (check)
5. Hold on – the longer the group stays, and the bigger it gets, the higher the temptation to ‘send in the security forces. (tbd)
At that point the Caracas protests will probably break in one of three ways:
Break 1) Istanbul Turkey model – the police were able to clear the protest camps quickly with almost no injury. Win (even if temporary) for the state.
Break 2) In Tahir (Jan 2011) and Kiev – overreaction led to a civil revolution that led to the overthrow of the government within a matter of days after a mass-violence confrontation (>50+ dead).
Break 3) In Damascus and Cairo (July 2013) it led to a violent crackdown (several hundred to a thousand + killed) and mass suppression that precipitate a civil war/insurgency.
We’ll see how the Venezuelan government reacts.(1)

The Civil Revolution Struggles Not to Eat its Own

The Maidan Revolution in Kiev organized broadly into two groups – peaceful protestors alongside moderate opposition politicians (who started the protests) and ‘militants’ who came to the defense of the peaceful protestors early on when police began attacking them.
The ‘militants’ organized into small groups of “hundreds”, and included many veterans of the Soviet occupation of Afghanistan as well as some of the ultra-nationalists and fascist movements on the far right who joined the protests. The ‘hundreds’ were incredibly well organized and disciplined, more so than any protest movement I’ve seen. At least as of the end of the weekend, they were largely in control. The only one who probably has credibility from the opposition politicians is Timishenko who was in jail and just released. Klitschko – who gets a lot of play because folks can talk about him as an ‘ex-boxer’ was regularly shouted down, had the microphone grabbed from him, etc. by the leaders of the Hundreds over the weekend. He may recover some influence as this (hopefully) moves off the street – but on the streets, he has almost none now.

How fascist is the Svodoba political party in Ukraine?

By way of example is the involvement of the Svodoba political party in the Maidan Revolution. On a casual glance, Svodoba clearly has had Nazi influences throughout its history for one seeking to find them.(4)  Founded in the post-Soviet turbulence of the early 1990s, Svodoba has gone through many mergers and divestitures of factional alliances. Along this ride Svoboda has been a Soviet “glory days” party, then ultra-nationalist, then moderated to simply be nationalist, which then moderated further into successive elections where they faired pretty well. But coming out of Euromaidan when many of the protestors became radicalized after having friends killed and their own blood spilled? Who knows.
That Ukrainian orthodox priest/war-cleric everyone’s got pictures of – he’s as likely to be Svoboda as any other political party.

Will Russia intervene in Ukraine?

In what hopefully will be mainly symbolic escalations the government in Kiev issued an arrest warrant on the former President while Russia withdrew its ambassador and accused Ukraine of falling to an “armed mutiny.” Unfortunately the language from Russia: “We do not understand what is going on there. There is a real threat to our interests and to the lives of our citizens.” Is eerily reminiscent of that used previously to interceding in Georgia where the ‘lives of [Russian]citizens’ was used as the pretext(2).
Technically both Russia and the US are signatories of the Budapest Memorandum (3), which guarantees Ukrainian independence and sovereignty, for which in turn Ukraine gave up its nuclear arsenal. But I don’t believe that’s a UN document, and Russia can block anything in the UN Security Council. Ukraine isn’t a member of NATO so that can’t be invoked, though they can choose to intervene, and the EU has no effective military force outside of NATO.
Sources:
(1) www.reuters.com/article/2014/02/24us-venezuela-protests
(2) https://www.bbc.com/news/world-europe-26327211
(3) https://en.wikisource.org/wiki/Ukraine._Memorandum_on_Security_Assurances
(4) https://en.wikipedia.org/wiki/Svoboda_(political_party)
Tags:Euromaidan, Russia, Ukraine, Venezuela