TLDRUpFront: Well-armed men from an ‘unknown’ faction have seized the parliament building in Crimea. They have since raised the Russian flag over the building. 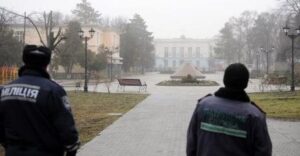 The Civil Revolution in Kiev faces its first serious national and international test.  Armed men in Crimea have seized the local parliament and raised a Russian flag over the building. This is as Russian jets were scrambled on its border with Ukraine.  Not much more is known at this time.

But his was a tactic leading up to the Georgian intervention over Ossetia. Issue Russian passports to any ethnic Russian in Ossetia. Claim “Russians are being threatened”, stage military exercises nearby, and then – blammo- use the threat to ‘Russian citizens’ as a pretext for a 2month intervention. Not all situations are the same. Ukraine is not Georgia and Putin is not Put… Oh. Hrm.