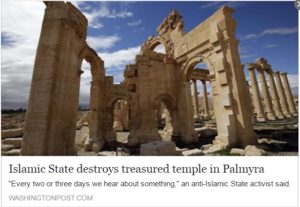 Full Context in the Back: I once took grief for describing, in *analogy*, that ISIS were the closest thing I could ever find to Tolkeins Orcs in real life. A completely nihilistic ideology that demanded aggressive expansion accompanied by death, destruction, systemic rape – and exalted these as virtues, not evils. I could very well have been wrong or harsh in that assessment, but I don’t feel too far off on it today.
As a reminder ISIS practices a kind of faux-Iconoclasm. You’ll never see a video of them destroying a small easily moved object. Those they sell as blood-antiquities. It’s only the large, immovable monuments that they destroy that and publicize it for propaganda.
Tags:Blood Antiquities, Iconoclasm, ISIS, Palmyra