Home  »  Foreign Affairs • InfoMullets   »   InfoMullet: Battle of Five Armies Part III “Fatahl Attraction”
Spread the love
TLDR Upfront: The encirclement of Aleppo by pro-Assad forces has been broken by an unheard of coordinated assault by two rebel coalitions. In response, Iran has sent elite paramilitary units from Iraq and Lebanon into the breach while Russia conducts a sustained air campaign on rebel positions. Once again an “all-in” four-way conflict between five different forces seems to be going on as each side puts more troops into this area. 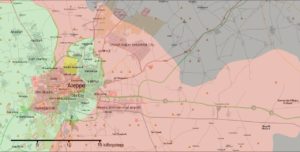 Full Context in the Back:
What I had nicknamed the “Battle of Five Armies”(1) last year, aka the Siege of Aleppo, seemed to be tilting in favor of Assad.
Earlier Syrian regular forces(pink), with Iranian QODS advisors embedded and strengthened by Hezbollah fighters and Russia air strikes advanced from the south towards Aleppo encircling it and cutting it off completely from the north (see map, credit WikiMedia). This strengthened the earlier capture late last year of Kuweyres Military Base last year from ISIS (grey) from which ISIS has not been able to advance significantly since.
However, in the last week two previously unaligned rebel coalitions (green) have joined forces to launch a coordinated assault on the southern supply routes to the city. (2) This, ahem, “rebel alliance” consists of Jaysh al Fath (Army of Conquest), a coalition group of salafi-takfiri and more Islamist rebel fighters which includes the Al-Nusra front (the Al-Queda affiliate in Syria) worked out their differences with Fatah Halab (Conquest of Aleppo). Fatah Halab are the “moderate” rebel forces (relatively speaking) that include the remnants of the Free Syrian Army and those that would not side with Al-Nusrah. Together this new rebel alliance punched through the Syrian encirclment and broke through the siege, although they have not cut off supply lines for Syrian forces.
These forces are not only fighting the Syrian forces, but also a Kurdish enclave (yellow) that has been holding out in the northern part of the city, a distraction perhaps from the larger threat but indicative of just how complicated the Syrian civil war has become. Not to mention the ISIS forces that remain nearby but haven’t done much since mid-March.
In reaction to the break-through Iran activated additional units of Hezbollah shia paramilitaries from both Lebanon and Iraq, sending them into this breach. The judgement of at least the Lebanese fighters as to the quality of the Syrian forces they are fighting with/for is not kind. (3) Russian airplanes have also stepped up airstrikes into this area and are able to target with precision weaponry rebel leaders.
1. Fatah Halab: Non-ISIS/Non-AQ/Non-Government Rebels (green in the map – these are the Turkomen fighters, Syrian Revolutionary Council and remnants of the FSA)
2 Kurdish Self Defense militias (YPG and Peshmerga/PKK support) (yellow)
3. Jaysh al Fath: Army of Conquest coalition including Al-Nusrah, Anhrar al Sham and others (white)
4. ISIS (grey)
5. Syrian Government – backed by Hezbollah (Lebanon & Iraq) light infantry, Iran QODS & advisors and Russian airpower. (pink).
The Battle of Five Armies has become the Stalingrad of the Syrian Civil War. (4) A four year and ongoing conflict that has been most punishing on the civilian population and upon which might turn territorial control of the entire northwestern section of Syria. Serious and lasting changes here could change the dynamic seriously in the rest of the country. Pro-Assad forces have pushed further into ISIS territory in the center of the country, but cannot afford the loss of Aleppo. A Kurdish coalition which includes Iraq kurds continues advancing on the ISIS heartland in Ar-Raqqah from the north but its not clear if they can, or would, make any move on the threatened Kurdish enclave in the city. (5)
Tags:Al Nusrah, Aleppo, Free Syrian Army, FSA, Hezbollah, Iranian QODS, ISIS, Kurdish Self Defense Militias, Russia, Syria