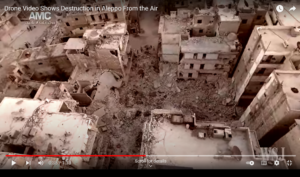 FullContextInTheBack:
Another day of the sustained unopposed bombing of Aleppo by Russian and Syrian planes – now with allegations they are using cluster bombs, incendiary munitions, and heavy ordinance. The WSJ uses the term bunker buster, but from the description, it sounds more like a thermobaric bomb. This style of weapon is specifically designed to produce a much more powerful, and sustained shockwave, like an earthquake. I’m not an expert so someone smarter than me can tell by the WSJ reports from eye-witnesses:

“Yasser Ibrahim al-Youssef, a political representative for the rebel group Nour al-Dine al-Zinki, said the attacks created craters 7 meters deep and 20 meters wide. The shock waves were being felt for about 10 seconds and destroying buildings up to 75 meters away, he said…The attacks have reduced multistory buildings to a fine rubble within seconds, leaving rescuers combing through the rubble with their hands as if excavating artifacts from sand, according to rescuers and videos posted online.”(1)

I’ve also attached the video of what is claimed to be the incendiary-weapons attack (2). There are other videos of entire blocks burning, but this is one that actually captures what appears to be the strikes that are causing the fires. Again I don’t know, it could be it hit something that ignited or detonated. But without a doubt, the weapons being used now are a significant increase in lethality than has been used throughout the war, and seemed to have been transported and specifically stockpiled in preparation for this offensive *during* the cease-fire. 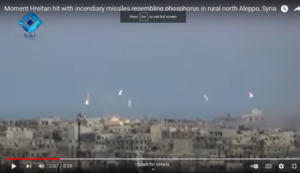 These weapons are being used to level entire city blocks with unrestricted attacks. A drone flying over Aleppo captures the scale and scope of what this can cause. (3) A third hospital has been taken offline since the bombing began, and only after three different days of airstrikes against it using a variety of munitions.(4)
President Putin appears to be uneleashing ‘Gronzy Rules’ on Aleppo described by Foreign Policy as:

For those thrilled at the prospect of post-American world order, here is a preview of the ‘Grozny Rules’; a new world order framework, quoted at length from the Economist:

“Bashar al-Assad, Syria’s president, is destroying his country to cling to power. And Vladimir Putin, the Russian president, is exporting the scorched-earth methods that he once used to terrify the Chechen capital, Grozny, into submission. Such savagery will not halt jihadism, but stoke it. And American inaction makes it all worse. The agony of Syria is the biggest moral stain on Barack Obama’s presidency. And the chaos rippling from Syria—where many now turn to al-Qaeda, not the West, for salvation—is his greatest geopolitical failure.

Mr Obama thinks that resolutely keeping out of the Syrian quagmire is cold, rational statesmanship. He may be “haunted” by the atrocities, but is convinced there is nothing he can usefully do. “Was there some move that is beyond what was being presented to me that maybe a Churchill could have seen, or an Eisenhower might have figured out?” Mr Obama mused in a recent interview with Vanity Fair. Mr Obama is right to think that the world’s problems cannot all be solved by American power, and that ill-considered intervention can make them worse, as when America invaded Iraq. But Syria’s agony shows that the absence of America can be just as damaging.
As America has pulled back, others have stepped in—geopolitics abhors a vacuum. Islamic State (IS) has taken over swathes of Syria and Iraq. A new generation of jihadists has been inspired to fight in Syria or attack the West. Turkey, rocked by Kurdish and jihadist violence (and a failed coup), has joined the fight in Syria. Jordan and Lebanon, bursting with refugees, fear they will be sucked in. The exodus of Syrians strengthens Europe’s xenophobic populists and endangers the European Union. A belligerent Russia feels emboldened.
By sending warplanes to Syria to prop up Mr Assad, Mr Putin has inflamed the struggle between Shia and Sunni Muslims. Mr Putin and Mr Assad now seem determined to take control of “useful Syria”—the line of cities from Damascus to Aleppo, and the territories to the west, forsaking the desert and the Euphrates valley—before a new American president takes office next year. Hence the ferocity of the assault on east Aleppo, the last major rebel-held urban area.
None of this is in America’s interest. Being cool and calculating is not much use if everybody else thinks you are being weak. Even if America cannot fix Syria, it could have helped limit the damage, alleviate suffering and reduce the appeal of jihadism. This newspaper has long advocated safe areas and no-fly zones to protect civilians. The failure to strike Mr Assad’s regime after he crossed the “red line” on the use of chemical weapons damaged American credibility, as many around Mr Obama admit. Now it is Russia that sets the rules of the game. Western action that once carried little risk now brings the danger of a clash with Russia.”(4)

The greatest foreign policy error of Bush’s presidency was intervening with a full invasion to create a conflict where none existed in Iraq. The greatest foreign policy error of Obama’s presidency was failing to lift even the tiniest measure of intervention, to *stop* a conflict already underway in Syria. Both errors will haunt US interests and world stability as we struggle with the consequences of this failure.
Standing aside doesn’t improve the order of the world under the misguided belief we are the worst actors on the stage, it just gives an opportunity to demonstrate there are worse actors than us ready to take our place. And in our absence, they will be the ones determining what that world order will look like: Grozny Rules & Salafi Takfiri States.

(2) //youtu.be/AYSZLgtjREI (Warning – may be disturbing)