Home  »  Foreign Affairs • InfoMullets   »   InfoMullet: We Besiege Thee, Hear Us
Spread the love
TLDR Upfront: The siege of Mosul has begun. This battle represents the last major offensive in Iraq to clear ISIS of holding territory in the country. 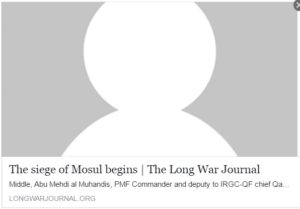 Full Context in the Back: There are roughly 6,000 ISIS fighters estimated to remain in the city and maybe 60,000 in the coalition of Iraqi troops, Iranian-backed Shia militias, Iranian advisors, Kurdish coalition fighters (consisting of Peshmerga, YPG and PKK) and US advisers plus US airpower involved. All those forces I listed above basically can’t stand at least 2-3 of the other forces listed above.
Indeed getting all the forces into position over the last few months has been like assigning seating at the worst ever wedding with really angry in-laws who will cause nothing but problems if they get seated next to the wrong relative. And oh yeah, the band has mined the dance floor with IEDs.
But, if Fallujah is any indication, it will be a hard month or two of gradually tightening encirclement and then city fighting with a burst of refugees. I know this time they’re better prepared for a refugee wave, having already set up camps to receive 750,000 nearby.
The article has a lot more detail. But it looks like, barring some unforseen game-changer, that President Obama is going to leave office with Iraq clear of major ISIS territorial holdings. Which would probably change his F to a solid C in terms of Iraq police. Clearing out Ar-Raqqah in Syria would move that up to a B- but I haven’t heard of any major moves on that and indeed ISIS is gaining ground in Syria in the central part of the country near Palmyra.
Tags:Iraq, ISIS, Mosul, Peshmerga, PKK, Shia Militias, YPG