Home  »  Foreign Affairs • InfoMullets   »   InfoMullet: When a City Dies
Spread the love
TLDR Up Front:Pro-Assad forces are in the final stages of securing the last territory in Aleppo, ending the Battle of Five Armies in a major immediate victory for Assad – though the future is uncertain. 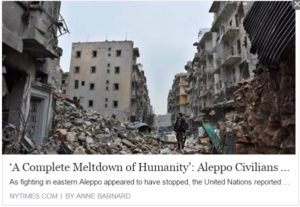 Full Context in the Back: Pro-Assad forces are in the final stages of securing the last territory in Aleppo, ending the Battle of Five Armies in a major immediate victory for Assad – though the future is uncertain. There is a great concern of war crimes or retaliation by the conquering pro-government forces. The rebel faction controls “less than a third of a square mile.” The future is uncertain however because Assad – despite being bolstered by Lebanese Hezbollah forces, Iranian Basji and regular troops, Iraqi militias and Russian airpower – does not have enough strength to *hold* the city. The victory of ISIS in the southeast of Palmyra, able to retake the ancient city as troops were diverted north to secure Aleppo, represents the challenge. Aleppo remains in the heart of a deeply divided area with the Suuni rebel opposition territories – largely held by the Army of Conquest to the west, Kurdish opposition territories to the north and ISIS territories to the east. Keeping it free from rebel influence will not be an easy task requiring significant garrison and patrol requirements.
A city that entered the Syrian Civil War with a population of ~3M exits that conflict with less than a million, mostly in the western-half of the pro-Assad side. Of the several hundred thousand civilians who remained in rebel-held territory as recently as the beginning of this summer, only a few thousand remained being herded by fighting into what is described as a “few meters” of land or are fleeing the city either into the countryside or evacuation centers. Almost the entire eastern half, the historic and medieval center of the city is demolished by six years of war which accelerated in unrestricted bombing campaigns carried out by Russia over the summer.
This is what it looks like when a city dies.
Tags:Aleppo, Assad, Battle of Five Armies, Syria, Syrian Civil War