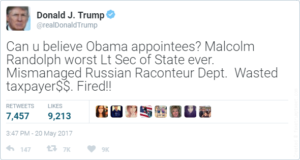 At the same time a White House statement was released confirming that Malcolm Randolph, JR.; Lieutenant Secretary of State, a political appointee by President Obama and held over by President Trump was being dismissed from his position. The statement alleged “gross and mishandling” of the division budget, “mismanagement” of staff and personnel and “failing to prioritize programs” in the Russian Raconteur Department. The statement concluded that members of the “Russian Raconteur team” were already being rotated to other positions within the State Department to “assist in the global fight against ISIS and terrorism.”

What might have been another bombshell scandal after this week’s firing of the FBI Director left reporters scratching their head after a few inquiries.  No independent verification could be made that there actually ever was a Russian Raconteur Department – or that there ever was a political appointee named Malcolm Randolph in the Obama, or any other administration. An Edmund Randolph was the first Attorney General of the United States.

Although it has yet to be, anonymous sources have tipped reporters that this might be another instance of President Trump and his White House team being foxxed. A play on the internet-practice of doxxing, this recent phenomena originated among savvy Federal workers eager to avoid President Trump’s budgetary axe and heavy handed leadership changes.

One Federal worker explained it this way: “It’s like doxxing, but in reverse. Instead of publishing the private information of a real person, you publish fake information about an agency department and leader that doesn’t exist. Leak some stories of dumb things they did to a few blogs, let social media pick, and ideally it gets on Fox News where Trump can see it. Foxxed.  The President fires the fake leader or cuts the fake program, feels better, and the rest of us go on with our work.”

The bold strategy apparently originated from Thomas Cotton, a National Park Service ranger and has since spread to many Federal departments. “Works like a charm,” a career lab technician at the NIH responded on agreement his name would be kept anonymous as he feared retaliation.  “Those clowns in the EOP don’t have a clue what anything is named,” he said using the acronym for the Executive Office of the President.

“The key is not to be too obvious in how you name it,” said an economic analyst in the Commerce Department, who again wished to remain anonymous. “It has to be plausibly bland and bureaucratic.”

“It helps if the political appointee was appointed by a Democrat like Obama or Clinton,” chimed in a co-worker.

No one knows how many fake governmental departments or leadership positions have been released into the internet media. The infrequency with which most sites check sources would make any accurate count an impossibility.

Foxxing isn’t without risk. The Federal government is so large, that sometimes what seems like a fake program actually exists. At HUD several employees agreed to be interviewed as long as their last names weren’t used. “Real shame about those fine folks over at the GSA,” recalled Jeff who works as a lease compliance auditor. The employees around him shifted uncomfortably and avoided eye-contact.   “We thought ‘Citizen’s Information Center’ – sounded dystopian enough. So we put together a rumor that a Carter appointee had just approved a report on why the government should extend Obamacare to Syrian refugees on account of global-warming and free trade.” A woman in the back stifling sobs.

“Turns out there’s a department in the GSA named the Federal Citizen’s Information Center,” Jeff recalled grimly. “Poor bastards didn’t even have time to update LinkedIn.”   He put his face in his hands, shaking his head. The supervisor of the group, Steve, stepped forward, his voice breaking but forceful as he put his hand on Jeff’s shoulder

Since President Trump has banned the WH Press Corps from the White House there’s no way to directly ask EOP staffers for comment on foxxing. But off the record, one White House intern relayed a time he handed off a folder outside the Oval Office to his boss, one of the two White House Deputy Directors of Communication whom he wouldn’t name. In the folder were extracts from conservative websites and a transcript of the previous night’s “Sean Hannity.”  He asked the Deputy why, when it was so obvious the foxxing was fake – give it to the President at all? Just then through the door came the sound of crashing chairs, breaking glass and a shouting male voice.  The Deputy Director of Communications just gave a knowing look , shrugged resignedly and entered the Office.

Seeking Congressional response Democratic Representative Nancy Pelosi was contacted for comment.  The former Speaker of the House and now Minority Leader had her office issue a statement. It read in part: “This is intolerable behavior and I call upon Speaker Ryan to immediately open a bipartisan House Committee to investigate this.”  The statement also touched on “Malcolm’s” service: “I have personally worked with Malcolm for much of my career and found him to be an honorable, sober and responsible man always putting duty and country ahead of politics.”  Finally, the statement promised swift legislative action: “I will submit to Committee a bill to appropriate $200m to ensure sufficient funding for Russian Raconteuring[sic] so this crucial function of US Diplomacy is not left vacant by President Trump’s terrible abuse of power.” Her office could not be reached for further comment.