TLDR UpFront: The violence which began as ISIS militants seized control of the mid-sized Philippines city of Marawi has spread to other provinces in the Philippines. President Duerte has declared martial law in Mindando for 60 days and may declare it over the entire country. Although not quite as dire as the Fall of Fallujah, the seizure of Marawi, especially given President Duerte’s reputation for extrajudicial killings, puts the Philippines in a potential national crisis. 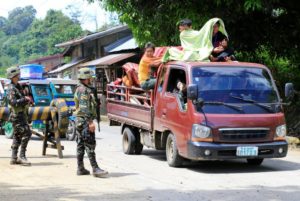 Full Context in the Back: Ever since the ISIS expansion in Iraq and Syria was halted at the siege of Kobani has so-called Islamic State successfully seized territory and raised their black flags. Today ISIS militants in the Philippines again raised the black flags over the city of Marawi, population 200,000, which they have effectively controlled now for two days.(1)  They have seized the city hall, hospitals, and taken Catholic priests hostages in Churches. There are reports of beheading’s being carried out inside the city. This despite the declaration of martial law in the city itself by President Duerte and the deployment of an additional 1,000 troops to the city after the local police and military were overwhelmed by ISIS militants. The military set up a cordon around the city as residents fled out of the city which is now described as a ‘ghost-town’, but it’s not clear if any troops have moved into the city.  The President extended martial law to the entire province, where nearly a quarter of the Philippines population lives to 60 days.

As described in yesterday’s InfoMullet, the ISIS presence across the Philippines is reported, at least by ISIS, to number ten battalions and if mobilized by this act could turn a local problem into a national crisis. In nearby Lana del-Sur province militant checkpoints appeared overnight catching the Malabang Chief of Police and beheading him on the spot. (2)

At a press conference President Duerte promised a “Marcos-style” crackdown and that if anymore terrorist activity occurred outside of the island of Mindando, he would declare martial law over the entire country.(3)  He also all but promised vast collateral damage in retaking the city:

This is exactly the wrong move to make.  President Duerte’s heavy-handed tactics in fighting against drug traffickers, using police death squads to kill thousands. (1)(3) Applying the same in counter-insurgency is like pouring gasoline on the fire.

Whether planned or not the seizure of Marawi by ISIS has become the “Provocation” in Kilcullen’s Accidental Guerrilla cycle of insurgency warfare. The cycle is depicted below, originally written for Al-Queda’s use of the strategy but now often adopted by ISIS. The ISIS aligned local militant groups and insurgencies that have sworn baayat to Al-Baghdadi have already met the Infection and Contagion thresholds, a benefit of ISIS’s acquisition strategy. (They bought into existing local groups.) (4) 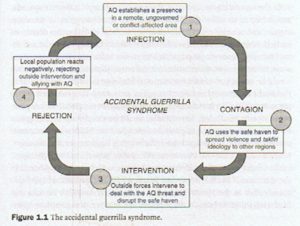 How Insurgencies Work 101 from “The Accidental Guerrilla”

Government overreaction in intervention, applying harsh martial law in areas well away from those affected by the violence, using this as a pretext to increase the use of death squads and harsh police tactics – risks creating the “Rejection” where local populations turn away from the government. They may become more sympathetic to the insurgents, or, take up arms and become their own insurgency groups which serves the same purpose of dividing government attention and resources. In essence, becoming ‘accidental’ guerrillas.  It’s how a few hundred Al-Queda operatives and several thousand Taliban can metastasize into 80,000 insurgents with the US intervention into Afghanistan. The vast-majority of those fighters are only bearing arms against the US because we were “in their near-space.”

The Philippines has a long history of insurgencies so they have a great deal of experience in these matters.  But this experience may also create tunnel-vision into how things have changed.  First, President Duerte, as a strong-man authoritarian, is the absolutely worst choice to fight a modern insurgency, for the reasons stated above. But additionally modern insurgencies are often no longer locally isolated, as they were in the past. Global franchisers such as Al-Queda and ISIS have co-opted and branded the local groups, creating linkages that didn’t exist in the past. ISIS, as an emerging-state actor, specifically is able to send into the country from abroad funding, techniques, equipment, recruits all along an ideological axis which makes any conflict no longer just a local squabble between ISIS’s Emir Hapilon and President Duerte, but part of the ‘global struggle’ that defines ISIS.

Although, Marawi is not Fallujah in 2014, an overreaction by President Duerte could be akin to President Assad’s overreaction to protests during the Arab Spring in Syria 2011 that helped launch the Syrian Civil War.  The InfoMullet will be watching this very closely over the coming days to see if it can be resolved with minimal violence outside of the deaths of the ISIS militants themselves.