Home  »  InfoMullets   »   InfoMullet: Once more into the breach dear friends…
Spread the love
TLDR Up Front: After months of consideration President Trump is expected to announce a new Afghanistan strategy tomorrow night. Although he had previously authorized Secretary of Defense Mattis to increase troop levels by 2,000-3,000 over the ~9,000 US soldiers already stationed there, Mattis has refused absent a broader Afghan strategy articulated by the President. There are three main options for President Trump: the military’s preferred option of a counter-ISIS style small-footprint (yet still larger than now) force to build on the lessons learned from Iraq and Syria.  Another proposal of a private security force of twice that size but half the cost consists of trainers and advisers throughout the Afghan military was written by a private-security supplier and championed by Steve Bannon. The ouster of Bannon seems to indicate that the generals options will prevail.  Without irony the Taliban themselves advocated for a complete US withdrawal.
Full Context in the Back:  The InfoMullet is always reluctant to predict outcomes but with the departure of Bannon complaining about ‘globalists’ it seems very likely that President Trump’s new strategy will be of a broadening the intervention in Afghanistan. This is in response to the continued deterioration and loss of territory by the Government of the Islamic Republic of Afghanistan (GIROA) to the Taliban as shown in the map below: 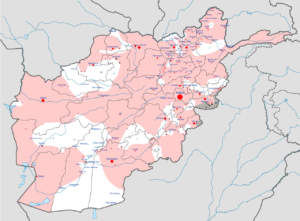 Although the first instinct may be to blame this solely on President Trump, the reality is the war in Afghanistan has been going poorly since President Obama began a large scale troop withdrawal from 90,000 personnel to ~5k which has since crawled back up to around 9,000. President Obama’s claims of “AQ-on-the-run” in 2012 were electioneering messages rather than a strategy. His declaration to have “ended” the wars in Iraq and Afghanistan of similar substance.  Just as what happened in Iraq, removing the US forces keeping the peace allowed a resurgent insurgency to begin capturing districts until Taliban (allies with Al-Queda) either now control, influence or contest nearly 40% of the Districts in the Country, more than 35% of the population and about 37% of the territory. 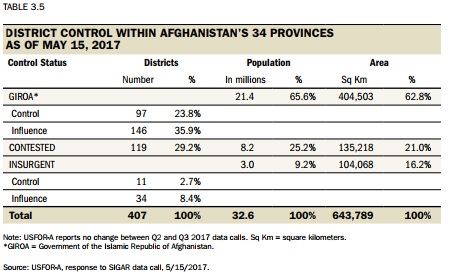 The drawdown also removed capabilities necessary to thwart the increase of ISIS Khorosan Province (which covers both Afghanistan and Pakistan.) Even though the Taliban fights ISIS, and the US used a MOAB on an underground network system in March to devastating effect, ISIS-K remains capable of conducting large scale terrorist attacks. It’s not clear however whether they can pull off the kind of emerging-state actor rise of ISIS in Syria and Iraq, or indeed whether that’s even the strategy.  They have been losing senior leaders faster than the Trump White House. Still, as the table below shows, it’s hard to declare #winning
Afghanistan today has some of the world’s largest terrorist training camps in areas no longer under the Islamic Republic of Afghanistan’s control. Now run by not one, but *two* different salafi-takfiri actors: ISIS, the Taliban and the Taliban subsidary the Haqqani Network. If it were just about Afghanistan – the cleaner argument might be to just accept the loss to the Taliban and a restoration of enormous suffering of the people there under their rule. It wouldn’t be pretty, but it would be contained. The existence of these camps however means that after heroin Afghanistan’s next largest export business remains salafi-takfiri terrorists.
What President Obama was *not* wrong on is that ultimately Afghanistan requires a solution in governance. This isn’t just about rotating political actors – but may require fundamentally remaking the system away from the forced-federal style favored by the neocons under President Bush. The country, the tribal system, is just not well suited to a federal-style government where remote leaders “represent” areas that do not feel any connection whatsoever to the central government. And the Afghan military simply doesn’t have the capability to stop the Taliban. A loya jirga system, council of elders, may have more sustainability. And the traditional triad of mayor, elders and imam in the local townships. It’s already almost become that defacto anyways with warlords from the major tribes wielding the most power in the political process.
But there can be no improvement in political conditions without stability. Already warlords in the north, as I wrote earlier, are preparing for the reality of a full scale war with the Taliban reminiscent of the late 1990’s under the Northern Alliance.

Devil in the Details

It’s the lessons learned most recently in Iraq and Syria that form the basis to one of the three major options Trump is believed to be considering. The first plan has been put together by President Trump’s National Security Adviser General McMaster based on lessons learned over the last 16 years on how to fight a counterinsurgency successfully while avoiding sparking an accidental guerilla backlash. McMaster’s is believed to borrow heavily off of efforts, begun under President Obama and continued under Trump, that proved successful in Iraq and Syria at pushing back ISIS. A smallfootprint but actively-engaged military presence providing capabilities and airpower to local partners who take the brunt of most of the ground fighting.  But in Iraq & Syria we had the Peshmerga in Iraq and the PKK and self-defense militias in the west, good fighters all around. There were also Shia militias being supported and trained by Iranian Special Forces not to mention some 20 other countries including the Russian air force occasionally involved on behalf of the Syrian regime we want to depose helping out.  An unusual military coalition to say the least not likely to be replicated in Afghanistan.

deploying 5,500 contractors to work directly with Afghan forces, a proposal he claims would be cheaper and more effective. The U.S. military, he argues, has never really committed to training at the lower levels, in the battalions, which are closely involved in counterinsurgency. “We’re talking about rolling out a bigger program like was done with the Afghan [special operations forces] for the rest of the Afghan forces,” he told FP in an interview.

“If the U.S. Army could suddenly deploy 4,000 sergeants, warrant officers, and staff officers to do that embedded mentoring job, I would shut up. They should do that,” he said. “But they can’t, they haven’t. They haven’t for 16 years. They’ve never fundamentally reorganized how they deploy for the last two wars they’ve been in.”(2)

Just because Prince has a controversial background doesn’t mean his plan isn’t without some merit. But it also has serious drawbacks most significant of which is almost no support within the Afghanistan government. For this and other reasons Price’s plan published it in an op-ed in May, never caught on with the military.(3)   Pretty much the main thing going for it was Bannon’s support. (4) And with Bannon removed, it’s probably between an counter-ISIS style counterinsurgency strategy by McMasters, or full withdrawal.  If President Trump’s strategy *is* to completely withdraw (which would be surprising but hey it’s Trump) then I imagine the warlord factions would quickly emerge to take on the fight with the Taliban.

But don’t just take their word for it.

Unsurprisingly complete withdrawal is the Taliban’s favorite option. They released a letter mocking President Trump and the US into supporting it.(5) Even putting aside that propoganda, the reality is the Taliban have been steadily conquering large sections of the country. 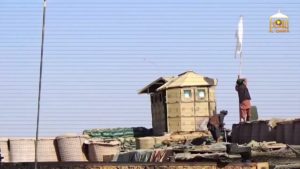 Taliban uses semaphore to signal their preferred US plan.

Even putting propaganda aside, a recent US military assessment indicated that the Taliban and the US were at “stalemate.” And as The LongWar Journal analysis shows, that’s probably the best case:

USFOR-A’s assessment of Helmand, for example, demonstrates that the US military is painting the rosiest picture possible when it comes to determining the extent of Taliban control. USFOR-A claims that only nine of 14 districts are Taliban controlled or influenced, however the situation is far more dire than that. The Taliban now controls six of the province’s 14 districts (Baghran, Dishu, Khanashin, Now Zad, Musa Qala, and Sangin) and contests another seven, including the provincial capital (Lashkar Gah, Nahr-i-Sarraj, Nawa, Kajaki, Nad Ali, Marjah, and Garmsir), according to data compiled by FDD’s Long War Journal. In other words, 13 of Helmand’s 14 districts are at the very least contested – much more than the assessment of nine by USFOR-A.(6)(7)

So if President Trump does announce a withdrawal strategy tomorrow night – expect the anti-Taliban warlords to begin acting more directly and in their own interests then supporting the central government.  Conditions have been ripe for a coup in Kabul all summer long as heavily armed actors begin positioning themselves for what comes after US withdrawal, or in anticipation of a US surge.

Key things to listen for tomorrow night is not just whether a new strategy is accompanied by a troop increase (which will be the headline takeaway) but what the overall regional strategy is. This includes not just sending military capabilities, if this is the plan, but exerting pressure on Pakistan to cooperate and improving governance both in Afghanistan and in nearby countries.