Home  »  Foreign Affairs • InfoMullets   »   InfoMullet: There was no Coup
Spread the love

TLDRUpFront: A military coup appears to have removed Zimbabwe President Robert Mugabe and his wife Grace Mugabe, Vice President from power.  Former Vice President Mnangagwa, himself removed from power on November 6th to make way for the President’s wife, has returned to the country amidst reports of fighting and heavy military presence in the capital.  Although this could be the end of Mugabe’s 37-year dictatorial rule, it is unlikely to be the end of ZANU-PF, Mugabe’s political party, dominance over the country. 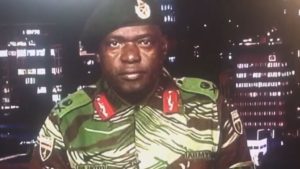 This is not a coup.

British decolonization in Africa followed a policy of seeking majority-rule from the inhabitants, which in most cases meant an overwhelming black majority in what had previously been white-ruled areas. In 1965, fearing their loss of power and what they believed were communist insurgent forces, whites formed the independent, yet unrecognized state of Rhodesia. That sparked what is variously known as the Rhodesian Bush War or the Zimbabwean War of Independence, which lasted from 1965-1979. The complex war mixed overt racial-conflict with ideological disputes typical of the Cold War. The Soviet Union and China supported competing rebel groups while the Rhodesian Army, even though fighting for white-only rule, included many black regiments. The outcome of the war was defeat for the so-called Rhodesian state in 1978 and the successful independence of Zimbabwe in 1979. (1)  In the aftermath two of the leading military forces, ZANU and ZAPU merged into the ZANU-PF party, with Robert Mugabe rising as its undisputed leader and becoming the Prime Minister of Zimbabwe in 1980. The ZANU-PF, and Mugabe, have remained the dominant political force in Zimbabwean politics ever since. Although early reform movements were popular: land redistribution from white farmers to black independence soldiers, over the years an increasingly dictatorial style of governing crushed all dissent and contributed to economic disaster including hyperinflation and widespread famine. Zimbabwe has been a failed state held together by the ZANU-PF deep-state and the dictator Mugabe for well over a decade now. (2)

As President Mugabe aged into his 90’s, and it became clear electoral change would not be permitted, the question of who would succeed the dictator, and when, became the dominant intrigue in the ZANU-PF.  This dispute became divided into generational factions: the old-guard consisting of those who had fought alongside Mugabe in the war of independence and held positions of power in the ZANU-PF ever since pitted against the younger generation. These two factions are known by “team names”, Team Lacoste for the old-guard and the G40 meaning “forty-years after independence” for the new-guard. (3)

These two factions are led behind the two most likely-successors to the President at the top of the ZANU-PF pyramid. Emmerson Mnangagwa leads Team Lacoste the old-guard, having served as Defense Minister in Mugabe’s new government of 1980 and held a series of critical and not-so-important, positions as his favor with Mugabe rose and fall over the years. Recently on the outs, Mnangagwa returned to power after the 2013 elections where he threw his support behind the President. (4) The leader of the G40, Grace Mugabe, is Robert Mugabe’s wife and forty-years his junior.  Grace Mugabe has been an extremely controversial figure, a Rasputin of influence over the President often accused of witchcraft and embroiled in her own scandals as she gained power in the ZANU-PF. (5)

The struggle came to a head on November 6th when “Team Lacoste” leader and Vice President Mnangagwa was ousted from his position. Fleeing the country, he was replaced by the President’s wife, cementing a powerplay for G40.  Although perhaps premature, Grace was then considered to be the next-in-line for the dictatorship. At least for a few days. (6)

The Lacoste Strikes Back 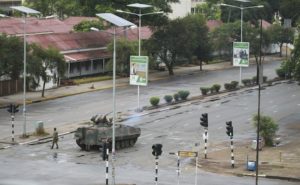 The coup took place over a few hours as witnesses described armed forces, including soldiers and tanks, were seen throughout the streets of the capital. (7)  Led by Gen. Constantino Chiwenga the military has taken great pains to clarify this is not a coup according to a statement read over the air by Major General Moyo and released in print:

“To both our people and the world beyond our borders, we wish to make this abundantly clear this is not a military takeover of government. What the Zimbabwe defence forces is doing is to pacify a degenerating political, social and economic situation in our country which if not addressed may result in violent conflict. We call upon all the war veterans to play a positive role in ensuring peace, stability and unity in the country.” (8)

The reference to ‘war veterans’ is a whistle in Zimbabwean politics to those who fought in the war of independence, Team Lacoste. 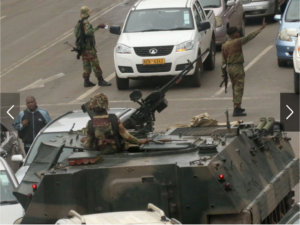 Despite declaring the coup “not-a-coup” and assuring its bloodlessness, there have been reports of hearing gunfire and heavy artillery even through to Wednesday morning. (9) Internal security forces including police guarding the parliament were seen being detained.  There is no reliable information on the whereabouts or status of President Mugabe and his wife Vice President Grace Mugabe. Though the military has claimed that their ‘safety is guaranteed.’

Although this could mark the end of the 37-year dictatorship of Mugabe, it is not the end of the deep-state in Zimbabwe. Team Lacoste is continuismo for the old-guard of the ZANU-PF. In this way the coup may play out more closely to the early stages of the Arab Spring. There the abrupt removal of long-time dictator Egyptian President Hosni Mubarak did not lead to systemic reform, only the continuation of the deep-state which had sustained his dictatorship in the first place.

When young dynamos force change seeking to overthrow the deep-state, even from within, sometimes the deep-state strikes back. Crown Prince Mohammed bin Salman of Saudi Arabia should take heed.