Seven HistoricalMullets have been added to the series “From 9/11 to Iraq.”  This series includes the very first analysis and commentary of what would evolve into the InfoMullet. It covers the period of time between just before the first anniversary of 9/11 in 2002 and to the eve of the invasion into Iraq in March 2003. 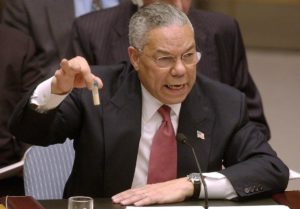 The iconic image of the lead-up to the Iraq War.

With the addition of nearly 1500 posts created on LiveJournal between May 2002 and late 2012 the InfoMullet can now provide a much fuller context of current events. Posts are added, with minimal editing for grammar, in the chronological order in which they appeared. Where appropriate these will be ‘bundled’ into “series” based on what are likely topics of interest. Included are the original discussion or commentary.  Below is the first complete series: From 9/11 to Iraq.

HistoricalMullet: What if it’s not about Iraq?

Only a few weeks short of the first anniversary of 9/11 a growing concern that the international order was turning away from the US march to war, and what ramifications there might be if a balance-of-power coalition forming against the US as the sole super-power in the world.  Post includes original commentary in first comment.

The consensus against the US on Iraq grows as Nelson Mandela and Jaques Chirac, Presidents of South Africa and France respectively state that the US must seek UN approval prior to attack. Post includes original commentary in first comment.

In the fall of 2002, Putin released a national security doctrine which opened the door for limited military preemption. This set the stage for Bush to release his own national-security doctrine making the case for preemptive regime change. Post includes original commentary in first comment.

HistoricalMullet: Except, of course, that nothing is over.

On the first anniversary of 9/11 – an editorial shared describes the overwhelming coverage leading up to the anniversary and what it meant for a nation debating war.

HistoricalMullet: Bush get’s his own doctrine!

Shortly after Putin declared a doctrine of limited preemption Bush responded with an expanded view of preemption. The implications of this doctrine, including both preemption against state and non-state actors as well as targeted killing outside of designated battlefields would constitute a radical shift in national security doctrine that would come to define the Global

Thirteen months after 9/11 it become clearer what President Bush was willing, and not willing, to do in the Global War on Terror.

The Independent Commission on 9/11 is approved – though it hardly seems independent.

HistoricalMullet: Phew! At least we have Portugal!

On the eve of the US invasion of Iraq the “Coalition of the Willing” leaves much to be desired, as does the case for war on the basis of an imminent threat. This is the last post in the “Between 9/11 and the Iraq War” Historical Mullet series. Original discussion is included in the first comment.