Home  »  Domestic Affairs • InfoMullets   »   InfoMullet: The Emperor has no Clothes and the White House has no Walls
Spread the love

TLDRUpFront:  If the Emperor has no clothes why would one think his White House has walls? There’s a good argument that the White House blanket-refusal to cooperate with the impeachment inquiry is an obstruction of justice. That practical impact is limited by the reality that the White House has no moat. No wall of defense against a range of damnation coming at it like an artillery barrage during a siege.

The accumulation of evidence in the House Inquiry is becoming a bit like Dante’s tour of the Inferno uncovering new levels of damnation.

There’s damning-by-faint-praise, such as “I never heard Biden’s name personally and was shocked! to read the White House summary transcript of the call. Shocked!” paraphrased testimony of Ambassador Sondland. Who was prohibited by the White House from testifying but did so anyways.

There’s straight out damnation by a parade of White House, Department of Justice, and Department of State personnel. They were instructed not to testify and that instruction they’re ignoring. These witnesses bring with their testimony contemporaneously created documentation of what occurred in the castle. That President Trump was using Mr. Giuliani to run a shadow foreign-policy effort outside of normal channels with an explicit purpose of trading the national security of the United States in exchange for foreign government support against domestic political opponents.

Then there’s the ‘damn fools’ effect exhibited by President Trump, Mr. Giuliani and now Chief of Staff Mulvaney who have all admitted on recorded television that they not only engaged in the activities at the heart of the allegations but saw nothing wrong with it.

Silence of the Wolves

The practical effect of the bans is that any witnesses who could, or would, offer a full-throated defense of the President, if such existed, are abiding the instructions not to testify. Either out of loyalty or that there is no full-throated defense and simply not showing up is the best they can offer.

The result of this range of damnation is a one-way siege where all evidence is aimed at the White House and little if any confounding evidence is coming out in the other direction other than through informal channels. And this is important. There’s a valid debate on the House methods and means, but even accepting that argument, when a witness swears an oath and subjects themselves to the rigors of questioning, that has a higher cache than a tweet or cable news rant.

The effect this is having is significant, even if not discernible in the noise and din of daily reporting. Multiple GOP House Representatives have explicitly stated they are open to impeachment. Many more are simply staying quiet instead of offering a defense. Senate leader McConnell is discussing a timeline for the Senate trial in Thanksgiving, hoping to avoid the timing window challenge I mentioned previously. That challenge is that if GOP Senators up for re-election in 2020 win their primaries in deep red states they have six years to not care about voting against Trump and may be more likely to break ranks.

Public support for impeachment continues to shift across the board: Democrats, Independents, and GOP. Though the rates, and starting points of support, differ – the directional trend on all three are moving in the same direction as this poll from FiveThirtyEight shows.

Noise to signal is high in politics.

Note the differences between directional momentum after the Mueller report and the WhistleBlower scandal.

From another source, a LawfareBlog poll found similar results and several snapshots illustrate this effect. First shows that in general, without naming a specific actor or party, Americans believe soliciting foreign interference in a domestic election is an impeachable offense: 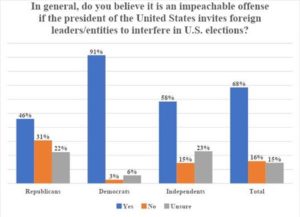 You Must be at Least this Blue to be this High

Second, the current percentages by political persuasion of Americans who believe that Trump conducted in such activities: 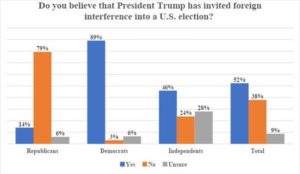 This is about Trump? I’d like to revise my previous answer.

And this poll specifically asks Republicans both their change in support of impeachment and overall familiarity with the WhistleBlower scandal. Generally the more they know, an increasing share are beginning to change their minds and support impeachment. 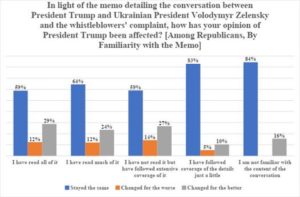 I’d like this to be off the record. I was never here.

This doesn’t show a majority of Republicans are shifting support – don’t need to support impeachment in their majority. This isn’t a poll of Representatives or Senators, but think of it like the margin of vote needed in either chamber. You don’t need all, or even most, of the Republicans in the Senate to vote for impeachment, only enough when combined with the Democrats to reach the threshold. And although Democrats don’t need any GOP votes in the house, the more they get the less it can look like a one-sided partisan witch hunt.

More important, impeachment is an inherently political process, I’m not even sure the trial has to take place, or have a conviction outcome to have it matter politically. Clinton skated with a censure and the accumulated unease of that result, I believe, put a drag on Gore’s efforts where he couldn’t embrace the departing incumbent but couldn’t shed himself of association either. And as we found in 2000, even fractional moves matter if they occur in battleground states. .

And although a criminal level of quid pro quo is not required in the political process of impeachment, the one-sided barrage of a White House with no walls seems to be creating a strong case that, absent a defense, that’s exactly what happened.

A youtube video of Mulvaney’s Colonel Jessup moment cued to the time it began. This of course was only after I laboriously collecting nearly two dozen confirming pieces of evidence about quid pro quo prior.

Sources on the steady stream of testimony in defiance of White House, DoJ, and DoS bans.