TLDRUpFront: Protests continue to occur in Lebanon and what had been protests turned into a limited uprising this week in Iraq. While the US was consumed with self-inflicted chaos in Syria that is still sorting itself out, the book-ends of semi-stability on either side of the country are falling apart. Not that Iraq was all that stable to begin with. And instability contagion has risks across Iraq’s shared borders with Syria, Saudi Arabia, Iran, Kuwait and Turkey to varying degrees. 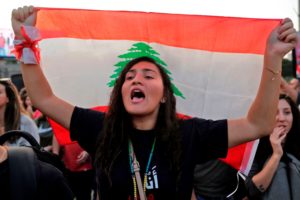 There has always been an “Arab Street”, politically active groups and movements organizing within an existing political landscape of the Middle East but generally aligned to factions within the existing structure. Then came the “Arab Spring” with it’s new form of leaderless resistance and place-based-occupations that targeted individual dictators: Mubarak in Egypt, Saleh in Yemen, and Ben Ali in Tunisia.  These protests appear different from either the Arab Street or the Arab Spring. Call them the new “Young Street”. Participants of these movements emerge from outside normal political classes and appear to be against the entire system of governance, which frequently involves explicit or implicit power-sharing between competing factions in Lebanon and Iraq. Specific issues range from concerns of corruption, stagnant economies, political influence peddling – and notably in Iraq – a simultaneous rejection of the foreign influence of both Iran and the US.

In Lebanon the protests have been non-violent, even tinged with bits of humor, and the results politically promising. Lebanon’s power structure consists of an explicit power sharing agreement between the dominant factions where the President will always be a Maronite, the Prime Minister a Sunni, and the Speaker of Parliament a Shia. The Shia influence has long-been dominated by Hezbollah, an emerging-state actor aligned with Syria and Iran and frequent foil for Israel. The Lebanese have a history of non-violent effective protests from the Cedar Revolution in 2005, when Rafik Hariri was assassinated and pro-Syrian forces were suspected. That peaceful revolution led to the withdrawal of Syrian forces from Lebanon. Rafik’s brother, Saad, eventually took the Prime Minister spot until an odd episode where Saudi Arabia recalled him to the Kingdom, forcing his resignation (see sources in first comment). That got worked out, he returned to power, but was unable to hold on against these widespread protest movements and resigned his office this week. There’s still two Hariri’s in the wings, half-siblings of Saad, so even with the resignation it’s not clear that the actual factional power structure will change. And Hezbollah’s political party, which has had the same Speaker in Parliament; Nabih Berri, doesn’t appear to be budging. Hezbollah’s leader, Hassan Nasarallah is making soothing sounds of sympathy to the protests but seems opposed to the fundamental reforms requested which would inevitably erode Hezbollah’s powers.

And it’s not that there isn’t risk in upending the three-faction system. This system emerged as a consensus compromise to end a decades long Lebanese Civil War, and the factions remain militarily strong and ideological deeply opposed. Power sharing, even with its’ shifting back and forth tides, has staved off a return to civil war – but does not appear up to the task of providing economic benefits.

Civil war is much closer on mind in Iraq, where this week already violent protests, with numerous killings of protestors by security forces, began to take on the characteristics of a general uprising. Protesters blocked key bridges crossing rivers in major cities on Friday, and today blocked the main port to the country in the Gulf at Basra. Over 250 protesters have been killed by security forces since the protests began several weeks ago, and although estimates vary, either several hundred or up to several thousand protesters have been wounded.

Of key note – Iraq has already passed some of my thresholds of a state beginning to tip over this week. In addition to the mass-violence against the protesters by the state, the protesters themselves are alleged to have hung two commanders of Iranian backed paramilitary forces and burned their political headquarters down. This is a serious mark of escalation, even if it’s not the tenor of the general protests, because it creates the conditions for a retaliation cycle that spirals out of control. Iraq right now is a Casablanca of mixed local and foreign interests: all of them heavily armed. The Iraqi government is effectively split into Kurdish Sunni, Arab Sunni, and Arab Shia factions – each with their own armed forces. There are extensive “private military units” (PMUs) which were formed within the Shia population to fight both ISIS and on the side of Assad in the Syrian civil war. Although Assad has reasserted hegemony over most rebel held areas, and ISIS’s territory has been all but eliminated, the PMU’s returning to Iraq have not disarmed, creating small private armies that do not answer to local powers. Through in a continuing US military presence and it’s a real mess.

Adding to this appears to be the complete incompetence of the current President of Iraq, who has already signaled he’d resign in accordance with protester wishes, but first has to pass a new electoral law. This is like rage-quitting a volunteer organization on social media, then on your next post saying, “But oh yeah, we still need to do that thing that we all need to agree on I’m proposing.” It’s uncertain when, or if, it will pass, and even whether the President’s resignation is enough now.

In the coming days I’m a bit more worried about Iraq than Lebanon given the destruction of the PMU headquarters. But both are in pretty perilous shape and considering both border the hornets’ nest we kicked up it couldn’t be happening at a worse time stability wise. This isn’t to say I understand the concerns of the protesters against a political class that seems consistently unable to deliver economic progress to their people and is more interested with intra-faction conflict at the political level rather than serving the needs of the general population. But if either Iraq or Lebanon tips into civil war, or even less-lethal but still contentious political paralysis, it creates opening for ISIS to re-exert itself given its ability to flow across borders and try to appeal to those experiencing violent oppression by the government.

Attack on the Iranian PMU